Flashback
By A. Van Jordan

Einstein has read JOHN HERSEY's Hiroshima in the New Yorker . He buys 1,000 copies to send to his friends around the world. Now, he goes into the classroom to teach, facing the chalkboard to work an equation.

I turn to the black expanse of the chalk
board and the numbers spill
from my skull first and from fingertips
in time. Time in mathematics
brings complications, sequentially.
Numbers demand order and orders
demand numbers to behave. Otherwise,
one places one digit out of place
and an entire world loses
equilibrium. Someone determines that
one number is the temperature to freeze,
someone else realizes another number brings water
to a boil, but someone got the math wrong
and -- now, if you'll allow me to dream --
the bombs pull us closer together
instead of separating the masses.
Working an equation is as tedious as a comedian
working a room, timing when to drop
the solution to our worries so profoundly we rear back
and laugh at them. Or, for those without
a sense of humor, math can be as simple as buttoning
a blouse, really: after you misfeed the first button,
though, every move of the hand, no matter how sincere,
becomes a lie.

From Poet's Choice in The Washington Post Book World, in which Robert Pinsky writes that A. Van Jordan "writes books of poetry that approach a subject the way a filmmaker or nonfiction writer might." His latest book, Quantum Lyrics, has a bibliography and begins many poems "headed by screenwriting categories such as 'Flashback' and 'Cut To.'" Many of the poems are about the development of race relations following World War II. "['Flashback']'s undertaking is audacious -- speaking as Einstein. The quiet, convincing directness in handling that last figure of speech about miscalculating and misbuttoning is successful. By evoking American history from unexpected, unsettling angles, Jordan demonstrates poetry's power to be at once intimate and wide-ranging."

Daniel volunteered at Hebrew school in the morning and needed to be at school for a couple of hours in the afternoon to work on a project with the rest of the robotics club, so Paul, Adam and I went to California Tortilla and Trader Joe's while waiting for him to finish, then we all drove up out of the city to Laytonsville, where Art of Fire, Dancing Pig Pottery, Greenman Leather and Tuatha were all taking part in the winter Countryside Artisans Tour...all artisans we have seen previously at the Maryland Renaissance Faire. I believe I am getting one of these for my birthday. *g* I particularly love their iridescent pieces, like this one. As it was last time we were there, the glassblowing studio was open for visiting... ...so we got to watch the artists and students working on their creations. And we got to visit with the cats who guard the barn. Don't be deceived by this innocent sleepy face: anyone who wanted one of the flyers had to brave claws and teeth! 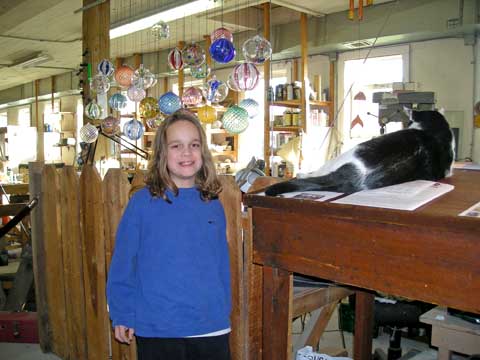 Adam, however, was brave enough.

Came home, had dinner and watched Shrek the Third, which I didn't know whether I would love -- I enjoyed the first two but I don't watch them compulsively the way I do, say, The Road to El Dorado or Mulan. Oh, but it rocked! And I'm very glad I saw Enchanted before this one because it would have suffered by comparison otherwise! My favorite parts, unsurprisingly, were Fiona's peers going from Disney stereotypes to Charlie's Angels, particularly Snow White's transformation into Xena, Warrior Princess (sure, it would be useful to have chipmunks scrub my toilet but I also love them as assistant butt-kickers to uncharming prince). I also must admit that I howled at touchy-feely Merlin, who's the Wizard of Oz crossed with Dumbledore here...Dreamworks knew that Dumbledore was gay before the rest of us, heh. My one disappointment was Charming's fate, because I was so waiting for the Monty Python punchline, after all the scenery-chewing: "But I only want...to SING!" (and rescue by one of the stepsisters, or better yet, Lancelot). Even if he did kill Bambi!

Perfectly enjoyable way to spend an evening, and now the world of college football is being thrown into chaos as Oklahoma beats Mizzou. (Why did it have to be Oklahoma!) The BCS show on Sunday might actually be kind of entertaining, not that I will ever understand how they think we will need three hours! I'm watching the Brotherhood finale regardless!
Posted by littlereview at 4:06 AM