Every time I'm reminded of the actor
who willed his own skull to repertory
for use as that of poor Yorick
in stagings of Hamlet, I wince to think
I forgot his name. Was it Cooke?
Cronin? Cracken?
Cooke I decide, and
doubt sets in. So the thought I always
nearly have about this morbid legacy
never fully shapes itself. I've almost
had this thought at least a hundred times.
For some reason until I get that name right
I can't permit myself to think it through.
Maddening, like a sneeze that won't quite,
all day it just, climax unbrought-to . . .
Sir Arthur Cronin seems plausible
until I suspect I've conflated the actor
with Conan Doyle, who solved hard cases
of lives dissolved. Absurd, really,
this paralyzing sense of obligation to a name.
Alas poor whoozis, who'd have given rise
to some thought in my still humming skull,
my wracked skull rich with the image of his,
held aloft nightly to shadow forth past performances,
like the echo of a hermit-crab-deserted shell.
Is it still in use? No prop man could throw it away.
Did he love puns? Was he the boneheaded sort
who felt Ophelia must be played by a man
because she would have been in Shakespeare's day?
Did he upstage a friend? Was he gifted enough to?
Sir Something. Arthur, George? Frederick.
It's killing me, since his whole idea was to be
remembered -- literally -- letting his too solid skull
stand for his love of the curtain-hush, the lights,
the flourish of lines and crushed velvet and the gasp
just audible in the front row; to be a part of it,
a body part of it. The thought I want to have
undoes itself again. You go ahead and think it for me.
I guess I never wanted it. I think that may be why
I had to tell you. Here, take this from me.
You'll think of something. Please. This is as far as I go.

From Poet's Choice in The Washington Post Book World. "Sometimes, as in Jill Rosser's new collection of poetry [Foiled Again], it's a comic, irritable gesture that recalls the abyss a footstep away," writes Robert Pinsky. "'Alas poor whoozis' propels a slide toward the outrageous death-jokes of 'my still humming skull' and 'it's killing me.' These suitably theatrical jokes and hi-jinks, like Hamlet's musing on the skull of Yorick the jester, link the limits of memory with the limits of life itself. By closing with the seven little words that hand over the anecdote and the search for that actor's name, giving them to the reader, Rosser makes a final allusion to mortality, in the mordant, laughing tradition of Shakespeare's graveyard scene.

I had to get up absurdly early for a weekend to take Daniel to a local Barnes & Noble, where his school PTSA was holding a fundraiser with several different school groups appearing, including the chamber choir of which he is a member. It was a very nice performance -- Christmas carols and Chanukah songs, including "Hanerot Halalu," "Silent Night," "O, Ir Kleyne Likhtelekh," "Angels We Have Heard On High," "Deck the Halls," "Kumah Echa," "Adoramus Te," "Tanzen und Springen" and "Bear Me Gently." The bookstore was donating a percentage of sales from people who mentioned the school to the school and there was a table of wish list books for the library, so it was sort of like an elementary school book fair on a much grander scale, and there was a pretty good turnout (plus all the holiday shoppers). Afterward we walked through downtown Bethesda looking in store windows a bit, then drove to Borders because that's the bookstore where my kids had gift cards as Chanukah presents from Paul's L.A. brother and his family, and we walked down to Bed, Bath & Beyond to get some un-thrilling household items on pre-holiday sale (including microfiber fuzzy slippers, yay!) 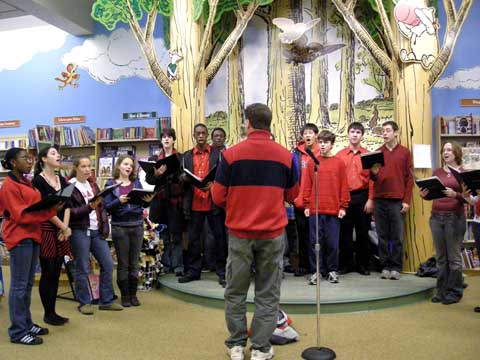 The high school choir performs beneath Winnie the Pooh in the children's department of Barnes & Noble. 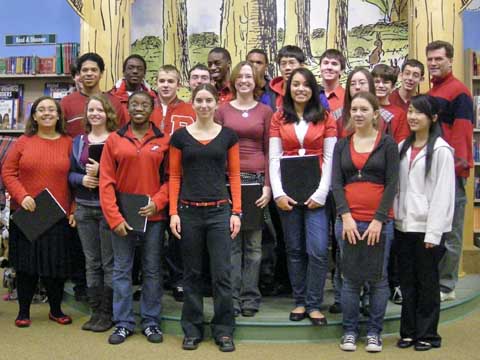 Here's Daniel with the rest of the group. Out front the fountain is turned off and decorated for the season. A Father Christmas in a nearby store window. ...and a Chanukah serving dish.

My eye has been bothering me for two days -- something going on with my tear duct, this seems to happen a couple of weeks after I get a cold every single time -- and the weather was iffy, and I consulted with vertigo66 and neither of us felt up to driving to beeej's holiday fangirling, which I feel terrible about but I really didn't feel safe driving so far after dark. So I had a quiet evening at home watching the end of Order of the Phoenix and then The Upside of Anger, which has the awesome cast of Joan Allen, Kevin Costner and Mike Binder (who wrote and directed), plus Evan Rachel Wood, Keri Russell and lots of other good people, and a twist that I so had no idea was coming -- I don't know how I missed knowing about it but for once I was really happy not to be spoiled for a movie, because I usually don't care. (Whereas I am spoiled completely for I Am Legend and thank goodness, because if I went to see that with significant changes from the original story and didn't know which direction they went, I'd have steam coming out of my ears!)
Posted by littlereview at 4:01 AM