Woman To Man
By Judith Wright

The eyeless labourer in the night
the selfless, shapeless seed I hold,
builds for its resurrection day-
silent and swift and deep from sight
foresees the unimagined light.

This is no child with a child's face;
this has no name to name it by;
yet you and I have known it well.
this is the hunter and our chase,
the third who lay in our embrace.

This is the strength that your arm knows,
the arc of flesh that is my breast,
the precise crystals of our eyes.
This is the blood's wild tree that grows
the intricate and folded rose.

This is the maker and the made;
this is the question and reply;
the blind head butting at the dark,
the blaze of light along the blade.
Oh hold me, for I am afraid.

Poem by an Australian writer and environmentalist, recced by chaosmanor whom I thank. I did some writing and some cleaning in anticipation of Paul's parents' arrival in the afternoon to attend Adam's school orchestra concert and celebrate my mother-in-law's birthday and the start of Chanukah. My parents came for dinner too, and all eight of us crammed into the kitchen for latkes and pan-fried chicken (got to have that oil)! Plus Paul made a cookie cake. The concert was terrific -- this middle school orchestra is really extraordinarily good, they played the third Brandenburg Concerto superbly, and a Taiwanese piece and some fiddle tunes and the Wexford Carol. Plus I got a wonderful Chanukah present from DRush! 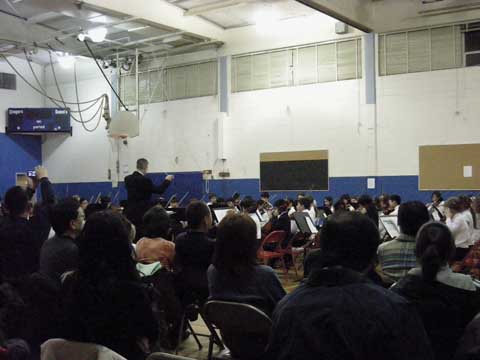 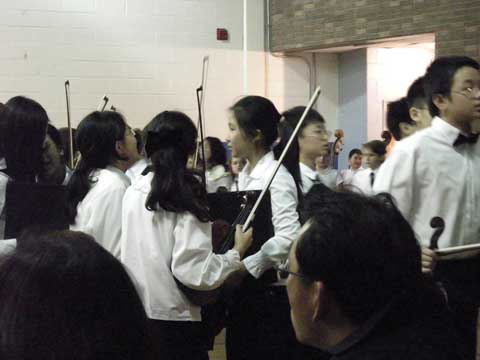 Here are the kids filing in -- the advanced orchestra and intermediate orchestra had to switch between the seats and the bleachers to wait. 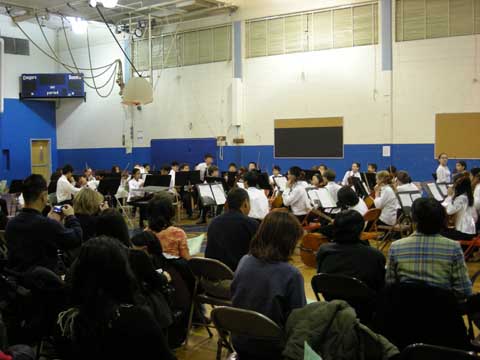 There were, of course, long tuning sessions. 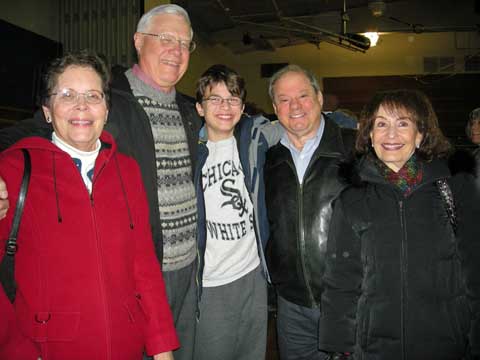 Daniel and all his grandparents at the concert. 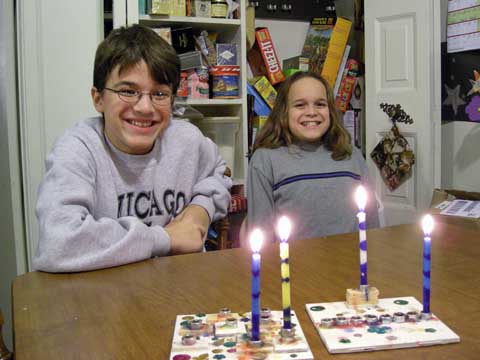 Here are the menorahs lit for the first night of Chanukah. 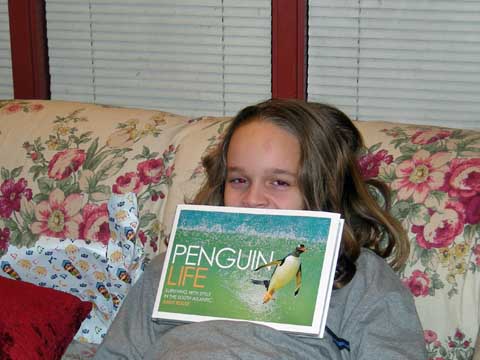 And Adam with the penguin book he received as a gift and spent the rest of the night reading (Outdoor Photographer had given it a very good review).

Was a bit distracted for Boston Legal due to cleanup and having been out all evening, but there was a lot I liked in the episode...much more than in the last couple, at least. Like, Shirley and Bethany go head-to-head and Paul is back! I expected the Denny-as-Larry-Craig storyline to be my favorite of the evening, but despite Stephen Culp as a gay D.A. -- and what a week that actor is having -- I still preferred Shirley's free speech case.
Posted by littlereview at 4:04 AM