Preludes For Prepared Piano 12:
Circle of Fourths
By Estill Pollock

Begin with private circles, an enclosed or surrounded space,
isolated, everything in close proximity,
sacred boundaries about me, fewer and fewer climbing
up with me higher.

The work is an inspiration for the shape of the mouth,
the simultaneous telling of stories never an issue.
No one really understood the words anyway—
droney, modal counterpoint.

A notebook he gave his wife,
filled with her favourite pieces of music,
icy jabs on the piano, six violins and magnetic tape, the backing vocals
in bold font highlights three quarters water.

The head in profile, the eyes,
light blue circles in the centres,
the background is supposed to be dark blue,
the window stained orange and yellow.
I forgot to say my body is scrunched up in the right margin.

I should have been more specific, lilting mordents,
the flourishing turn figures enhancing
fluid legato passages,
from the raked stalls to the stage, collapsing the spiral,
everywhere irrational, transcendental.

Here's what I learned. Near the edge of the paper
history repeats itself. Everything is outlined in black.

I spent a lovely afternoon with Perkypaduan eating soup from California Tortilla and watching December Boys. She brought me a home-strung chalcedony, moonstone and silver bead necklace -- my favorite kind of present! And I got holiday cookies in the mail from Ribby and a card from Totally Kate and a really wonderful present...a set of Now Voyagers from Shalini, who'd been cleaning out her Star Trek stuff. I only have two complete sets and sometimes get asked for issues or by prospective employers who want to see issues, so this is a really nice thing for me to have.

In the evening we went to Daniel's school for the December PTSA meeting, holiday mixer and chorus performance. It always takes a while to get over there in rush hour traffic, so we dropped him off, walked to the nearby Starbucks for coffee while he was rehearsing, then went to the school for the event. We weren't home till nearly 9 so we had a very late dinner but it was a lovely concert with Chanukah tunes and carols by both the chamber chorus and the a cappella group, plus some popular songs. 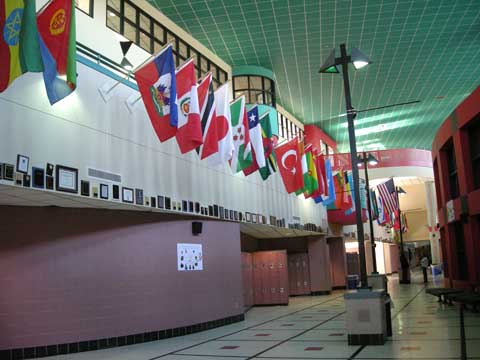 This is the main downstairs corridor leading from the lunchroom to the theater and gym in Daniel's high school, which is so large that the corridors have street names like "Maryland Boulevard." The red curve is the front of the library. 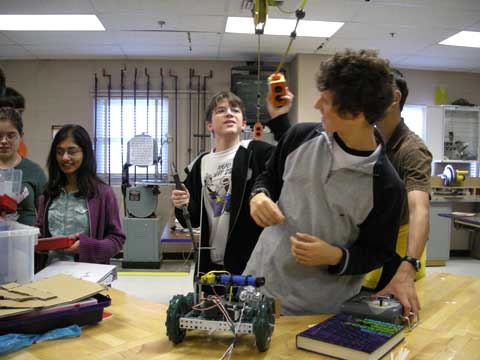 Daniel is a member of the robotics club, where the kids are building robots like this one. 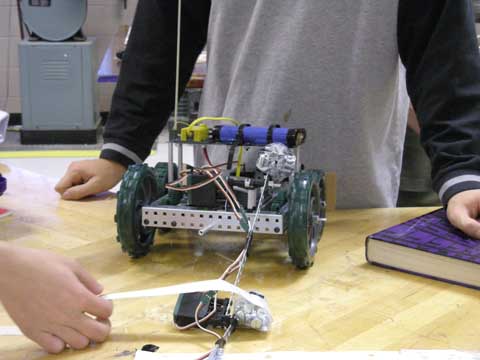 The club will build a life-size humanoid robot for the national competition in the spring. 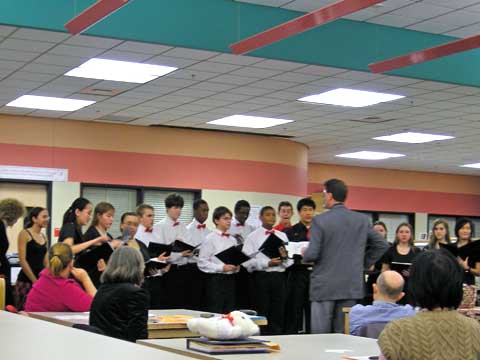 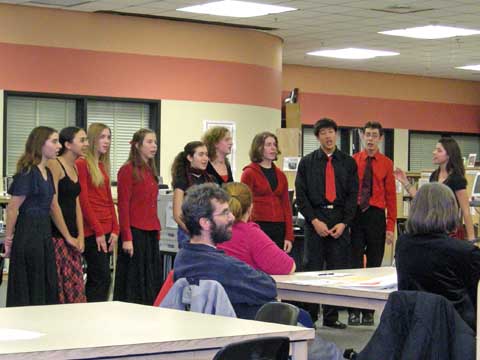 So did InToneNation, the school's award-winning student-directed a cappella group. 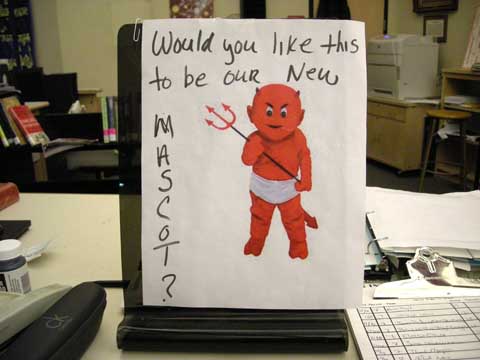 I think this sign in the library speaks for itself. 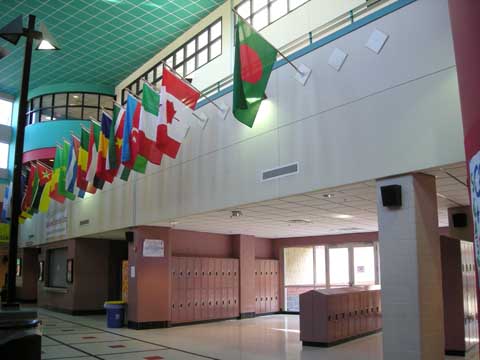 Another view of the main corridor looking from just beyond the library past the school store toward the courtyard.

We did make it home in time for Boston Legal, cracked as usual and lots of fun though again we get Alan more in serious angry mode and there's quite a bit of darkness over the holiday festivities. Spoilers: It starts with Denny, wearing light-up antlers, shooting a client with a paintball gun because the client's firm, GreenPeople, wants to drop Crane, Poole & Schmidt for having claimed to be green-friendly when there are no solar panels and no recycled computers there. Because Shirley is in Atlanta at a conference on environmental law, Carl gets the case. Meanwhile Clarence tells Alan that he lost his house -- the bank foreclosed when he couldn't keep up with the spiraling interest on top of his student loans -- and Jerry tells Katie that Lee has dumped him for an iPhone, which he finds so humiliating that he has taken to hiding under desks -- first his own, then Carl's while Carl is telling Lorraine that despite her past as a madam, she has a cleaner record than most of the partners at the firm even excluding Denny, so she is welcome to stay.

Alan goes to the bank and makes a lot of noise talking to a lobby teller about the subprime mortgage scam, which attracts the bank manager who says he's just as much of a victim -- banks are facing plunging stocks and mortgages they'll never collect. The good-ole-boy lawyer Palmer tries to claim in a friendly manner that Clarence is a lawyer and should have been smart enough to read a legal contract, but Clarence counters that no one explained what could happen to his fees if the prime went through the roof. Palmer says that even Alan Greenspan couldn't have foreseen that and gets nasty, saying that Clarence was never lied to: he made a deal, now he doesn't like it, so he deserves to lose his house. Alan points out that some of the people holding the trillion dollars worth of loans that will be called in as interest rates take off will undoubtedly be on a jury if Clarence's case goes to court. He asks who they will feel for: a man who lost his home for missing two payments, or a bank? Clarence is given time to pay off the loan and a fixed rate.

Denny's old friend from GreenPeople testifies that Denny lied about his firm's commitment to the environment. Then Katie asks him about the bottled water his lawyer is drinking, how come he goes out for ribeye steaks with Denny when eating beef is worse for the environment than driving a car, and why he drives a hybrid when their components and fuel really aren't environmentally safe at all. The plaintiff's lawyer says that the issue here is that Crane, Poole & Schmidt refuses to be held accountable for their promises even if her client personally may be a hypocrite, but Carl argues that no one can say precisely what would constitute being green: one minute we're supposed to eat farmed salmon to spare wild salmon, then the opposite, one minute we're told to walk to work, then we're told that if it will cause us to eat more meat it's better to drive, and overall the chicken littles would be far more effective if they'd stop yelling that the sky is falling and filing lawsuits when they could be giving helpful directives about the little things that make a difference, like environmentally friendly holiday lights.

Carl wins, but Denny is too distracted to care; Alan has become worried about his erratic behavior like shooting clients and drags him to his annual CAT scan. While holding Alan's hand, he hears about the proteins in his brain and is told that he ha MCI, to which he promptly responds that he knows better than that -- he has AT&T. The doctor explains that MCI is mild cognitive impairment, which appears in 29% of people under 85. In six years, about 80 percent of such patients develop Alzheimer's, but he doesn't think Denny needs to worry: as a drinker and a smoker at 75, the doctor doesn't expect Denny to live that long. While Alan is trying to cheer him up, Katie tries to cheer Jerry up by saying that Lee is obviously a total nutjob for cheating on him, even though Lorraine agrees with Lee that iPhones are sexy. Katie suggests that Jerry not limit his dating pool to mentally impaired people -- in the real world, she reminds him, sometimes women fall in love with their abusers and men with their mothers. But it's a passionate kiss under the mistletoe from Lorraine at the holiday party that gives Jerry his confidence back. He asks Katie to dance and has Whitney claiming jealousy.

Ultimately Clarence ends up dancing with Whitney while Alan snuggles Lorraine and Denny hits on one of the go-go dancers. Later, on the balcony, Denny is still angry at the doctor for telling him he wouldn't live long enough to get Alzheimer's. Alan wonders what the odds are of one man getting both Mad Cow and Alzheimer's, anyway. Denny says that he appreciates each day, which he might not do if he quit smoking and drinking, though he is considering giving up sex because blood can't go to his brain and penis at the same time and that's probably what caused his MCI. He isn't going to worry about it that night, though, because Christmas makes everything wrong go away, Denny adds, revealing that he once had sex with a Christmas tree...well, a woman dressed as one, anyway. He is resigned to never having sex with Lorraine but he asks Alan if, for a Christmas present, he can smell Lorraine's perfume on Alan. "Don't try anything," warns Alan, allowing Denny to smell him, though once Alan discovers that Denny smells like the go-go dancer, they end up hugging and sniffing each other. "Let It Snow" is playing and it's snowing in Boston.

So I know I am supposed to be delighted that Peter Jackson is making The Hobbit. But two movies? The Rankin Bass cartoon managed to fit it into 77 minutes, and while that admittedly has many drawbacks, Jackson should be able to do it in two and a half hours! It's not even like The Two Towers where there are multiple storylines unfolding. I fear that we're going to get a bloated monstrosity like King Kong. And speaking of apes, my kids were frightened to learn that monkeys can perform mental addition in a manner remarkably similar to college students!
Posted by littlereview at 4:03 AM