We had yet another glorious day at the shore, starting with a morning visit to the beach, where we saw at least four dolphins (we think one had a baby with her) jumping in the waves not 50 yards from us! There were UNC students with a net catching small fish to study the health of the ecosystem, and they let us put the sand crabs back into the surf since they didn't need any of those for their study. We ate lunch at the hotel, then drove to Carolina Beach State Park, where carnivorous local fauna grows including pitcher plants and Venus fly traps -- we would never have found the latter had we not run into a friendly park ranger collecting trash, who walked us down a closed trail past bladderworts and a colorful little skink to show them to us. We asked him if there were fiddler crabs in the park and he suggested that the best place to see those was at Battery Buchanan at the bottom of the island, so we drove there and saw hundreds of little scuttling crabs, plus son spotted a hermit crab in the river and we soon found many more.

We did a quick hike up the hill where the Confederate garrison formally surrendered after the Battle of Fort Fisher, but it was very hot, so instead of exploring the remains of the fort, we drove into nearby Kure Beach, where we got ice cream and walked onto the pier. There were many people fishing and many seagulls sitting on lampposts hoping to catch their leftovers, plus a few pelicans waddling right up the railings to see if they could snatch some live bait. In the late afternoon we went back to the beach near our hotel, where the waves were much bigger at high tide. Then we had a quick dinner and went back to the Carolina Beach boardwalk so younger son could go on some more of the amusement park rides -- unfortunately the Wheel of Fire wasn't working this evening, but he rode most of the flipping and spinning rides while the rest of us looked in tacky souvenir shops (Daniel needs a birthday present for his girlfriend and nothing makes me happier than cheap cotton beach dresses)! 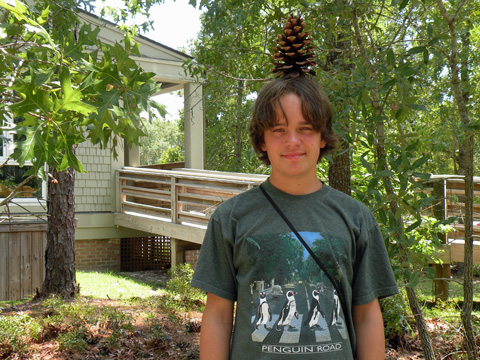 Adam balances one of the park's longleaf pine's enormous pine cones on his head. (I tossed him one like a football and accidentally gave him a splinter!) This is Battery Buchanan, where the Confederates retreated and surrendered after fighting at Fort Fisher. Many, many fiddler crabs live in the marshy grass below the fortifications. A dragonfly rests in the dune grasses near the water. 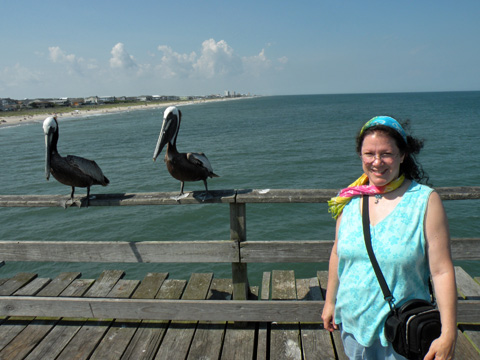 Here I am with some of the pelicans at Kure Beach's pier. They seemed disappointed that I had no fish. 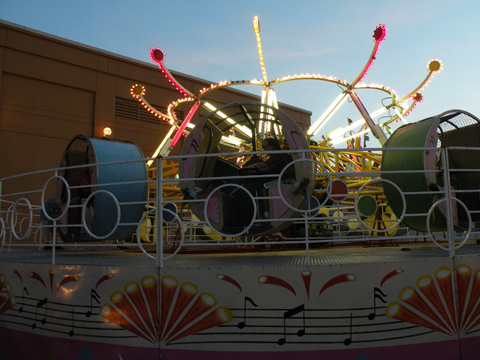 Adam rides the whirly-twisty thing -- he wanted me to go on with him, but I pleaded old age and took photos instead.
Posted by littlereview at 12:18 AM