Poem for Monday and Virginia's Falls

Republic, your cool hands
On my schoolgirl shoulders.
Not sure what allegiances meant
Until the vows were held by heart,
By memory, by rote, by benign betrothal.
Republic, you were mine, I knew
Because of Mother's religious pamphlets:
Lindsay for Mayor.
McGovern for President.
How to Register Voters.
I didn't ever want to go to school
On Saturdays. The baby-sitter said
If Nixon won, I'd have to go. Me,
Your most cherished child bride.
I wanted a white communion dress
Like the ones the Catholic girls wore.
Republic, you know I wanted to play
Cards with Mother. Mother smoking
Marlboros, watching Watergate all week.
Citizen Mother all consumed at that confessional.
I liked the name Betsy Ross.
I liked the idea of sewing flags.
I liked the tattered textbook about the colonies.
So tender, so tender. My Republic,
I am pledged by my childish troth
So strangely to you.

Our day started slowly -- Daniel had robotics, Adam volunteered at Hebrew school, Paul and I sat around reading and listening to music. After lunch we picked up Thing Two, thinking we would go to the National Arboretum to see the most recent bonsai exhibit, but it was already nearly 2 p.m., so we decided to go to Great Falls, Virginia instead. It was colder than downtown on Saturday but very sunny, so we made sure to keep moving to stay warm -- we went to all the overlooks to see the falls through Mather Gorge, then down the trail where the river gets flatter and wider, and around through the ruins of Matildaville before heading to the visitor center to see the exhibits and warm up. Can anyone explain why the ice formed these jellyfish-like circles at the base of the falls? 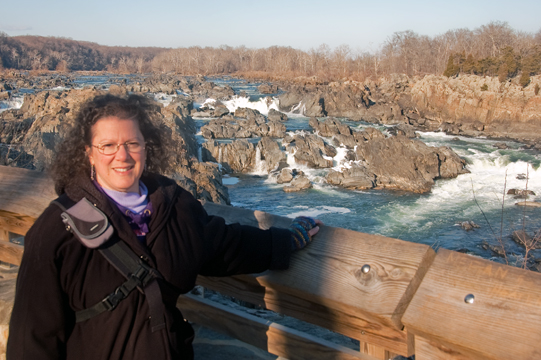 We kept up our trend of watching very little football so as not to jinx the outcome, so although we followed the Ravens-Chiefs game on espn.com on my phone and then on the radio, we saw only the highlights. I tried not to look during the Eagles-Packers game because I wanted Michael Vick to lose at least as much as I wanted the Ravens to win; we were all very happy when Green Bay came out on top! We didn't watch the Maryland-Duke basketball game either because I wanted to watch Downton Abbey, which I enjoyed a lot -- we'll have to record next week's since we won't be here!
Posted by littlereview at 12:06 AM