It is always a pleasure to spend a weekend in another century, even a very rainy one. We spent Monday at the Pennsylvania Renaissance Faire with Paul's parents, Adam's girlfriend, and Dementordelta, where we all got poured on several times but had a great time anyway. Adam and Maddy had lunch with us, went to the first Don Juan and Miguel show with us, then went off to do their own thing; the rest of us saw the abbreviated Henry V, the end of the early joust, the second Don Juan and Miguel show, the royal falcons, the rescued greyhounds, a bit of glassblowing, many street performers, lots of jewelry and craft shops, and lots of food ranging from the healthy vegan Aztec chili to the deadly deep-fried Snickers and cheesecake on a stick.

We caught up with Adam and Maddy after dinner, which for several of us involved either panini or strudel or both. Then we all went to the late joust, which as usual involved explosions, gunfire, and flames around the castle as well as jousting -- we also saw about five minutes of blue sky, the first time all day. We said goodbye to my in-laws and stopped in the Mount Hope Winery shop to get sangria and Pennsylvania Dutch spiced apple wine to bring home. On the way there, we dropped Daniel back at his dorm in College Park, then Maddy at her house, arriving just in time to keep cats from starvation. Here is one photo taken by Delta of my family, Maddy, and a Renfaire performer; more later in the week! 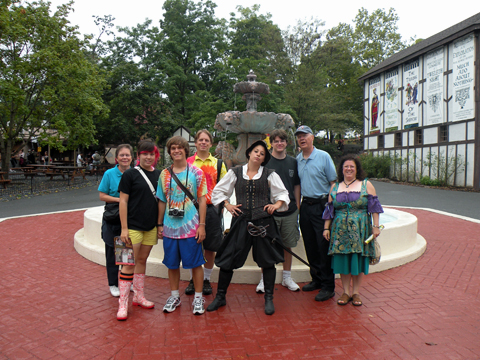