Lyrics for Wednesday and Canal in Autumn

By the shore's of old Lake Michigan
Where the "hawk wind" blows so cold
An old Cub fan lay dying
In his midnight hour that tolled
Round his bed, his friends had all gathered
They knew his time was short
And on his head they put this bright blue cap
From his all-time favorite sport
He told them, "Its late and its getting dark in here"
And I know its time to go
But before I leave the line-up
Boys, there's just one thing I'd like to know

Do they still play the blues in Chicago
When baseball season rolls around
When the snow melts away,
Do the Cubbies still play
In their ivy-covered burial ground
When I was a boy they were my pride and joy
But now they only bring fatigue
To the home of the brave
The land of the free
And the doormat of the National League

Told his friends "You know the law of averages says:
Anything will happen that can"
That's what it says
"But the last time the Cubs won a National League pennant
Was the year we dropped the bomb on Japan"
The Cubs made me a criminal
Sent me down a wayward path
They stole my youth from me
(that's the truth)
I'd forsake my teachers
To go sit in the bleachers
In flagrant truancy

and then one thing led to another
and soon I'd discovered alcohol, gambling, dope
football, hockey, lacrosse, tennis
But what do you expect,
When you raise up a young boy's hopes
And then just crush 'em like so many paper beer cups.

Year after year after year
after year, after year, after year, after year, after year
'Til those hopes are just so much popcorn
for the pigeons beneath the 'L' tracks to eat
He said, "You know I'll never see Wrigley Field, anymore before my eternal rest
So if you have your pencils and your score cards ready,
and I'll read you my last request
He said, "Give me a double header funeral in Wrigley Field
On some sunny weekend day (no lights)
Have the organ play the "National Anthem"
and then a little 'na, na, na, na, hey hey, hey, Goodbye'
Make six bullpen pitchers, carry my coffin
and six ground keepers clear my path
Have the umpires bark me out at every base
In all their holy wrath
Its a beautiful day for a funeral, Hey Ernie lets play two!
Somebody go get Jack Brickhouse to come back,
and conduct just one more interview
Have the Cubbies run right out into the middle of the field,
Have Keith Moreland drop a routine fly
Give everybody two bags of peanuts and a frosty malt
And I'll be ready to die

Build a big fire on home plate out of your Louisville Sluggers baseball bats,
And toss my coffin in
Let my ashes blow in a beautiful snow
From the prevailing 30 mile an hour southwest wind
When my last remains go flying over the left-field wall
Will bid the bleacher bums ad?eu
And I will come to my final resting place, out on Waveland Avenue

The dying man's friends told him to cut it out
They said stop it that's an awful shame
He whispered, "Don't Cry, we'll meet by and by near the Heavenly Hall of Fame
He said, "I've got season's tickets to watch the Angels now,
So its just what I'm going to do
He said, "but you the living, you're stuck here with the Cubs,
So its me that feels sorry for you!"

And he said, "Ahh Play, play that lonesome losers tune,
That's the one I like the best"
And he closed his eyes, and slipped away
What we got is the Dying Cub Fan's Last Request
And here it is

Do they still play the blues in Chicago
When baseball season rolls around
When the snow melts away,
Do the Cubbies still play
In their ivy-covered burial ground
When I was a boy they were my pride and joy
But now they only bring fatigue
To the home of the brave
The land of the free
And the doormat of the National League

I ate way too much on Halloween and did not feel great on the morning after, but I got lots of exercise to make up for it since it was the last day of the Pokemon Go Halloween event and I've already walked Vulpix, Seel, Ivysaur, and Mankey until I could evolve them (my Magnemite still needs four candies to evolve). It was a lovely cool day, and after work and laundry, Paul and I went to take a walk along the C&O Canal from Lock 8-10. I didn't realize until just before we left that I'd inadvertently changed my camera settings, so nearly every photo I took had a filter (I'm not even sure which one!), but they came out kind of interestingly watercolor-y on this overcast fall day so I kept them: 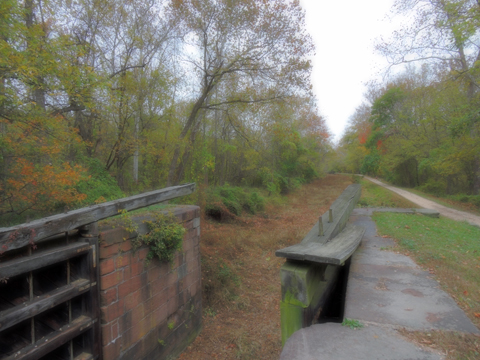 It's supposed to get ridiculously warm as the week goes on. We caught up on Once Upon a Time while I was folding laundry (this whole season would be annoying me with its rushed stories and abruptly dropped in people from characters' pasts who vanish just as quickly, but we get double Regina every week so all is forgiven). We missed Supergirl on Halloween and we're a week behind on The Flash so there was no point in watching this week, and we skipped Agents of SHIELD too to watch the World Series -- usually my teams play better if I don't watch them but the Cubs acquitted themselves very well, so we're going to miss more shows this week for baseball!