Poem for Wednesday and Midterm Elections

The last ghostly patch of snow slips away—

with it—winter’s peaceful abandon melts
into a memory, and you remember the mire
of muck just outside your kitchen window
is the garden you’ve struggled and promised
to keep. Jeans dyed black by years of dirt,
you step into the ache of your boots again,
clear dead spoils, trowel the soil for new life.

The sun shifts on the horizon, lights up
the dewed spider webs like chandeliers.
Clouds begin sailing in, cargoed with rain
loud enough to rouse the flowers into
a race for color: the rouged tulips clash
with the noble lilies flaunting their petals
at the brazen puffs of allium, the mauve
tongues of the iris gossip sweet-nothings
into the wind, trembling frail petunias.

Mornings over coffee, news of the world,
you catch the magic act of hummingbirds—
appearing, disappearing—the eye tricked
into seeing how the garden flowers thrive
in shared soil, drink from the same rainfall,
governed by one sun, yet grow divided
in their beds where they’ve laid for years.
In the ruts between bands of color, ragweed
poke their dastard heads, dandelions cough
their poison seeds, and thistles like daggers
draw their spiny leaves and take hold.

The garden loses ground, calls you to duty
again: with worn gloves molded by the toll
of your toil, and armed with sheers, you tear
into the weeds, snip head-bowed blooms,
prop their struggling stems. Butterfly wings
wink at you, hinting it’s all a ruse, as you rest
on your deck proud of your calloused palms
and pained knees, trusting all you’ve done
is true enough to keep the garden abloom.

But overnight, a vine you’ve never battled
creeps out of the dark furrows, scales
the long necks of the sunflowers, chokes
every black-eyed Susan, and coils around
the peonies, beheading them all. You snap
apart its greedy tendrils, cast your hands
back into the dirt, pull at its ruthless roots.
Still, it returns with equal fury and claim:
the red poppies scream, the blue asters
gasp for air, strangled in its vile clasp
that lives by killing everything it touches.

The sun’s eye closes behind mountains, but
you lose sleep tonight, uncertain if the garden
is meant to inevitably survive or die, or if
it matters—one way or the other—with or
without you. Maybe it’s not just the garden
you worry about, but something we call hope
pitted against despair, something we can only
speak of by speaking to ourselves about flowers,
weeds, and hummingbirds; spiders, vines, and
a garden tended under a constitution of stars
we must believe in, splayed across our sky.

I'm following the election results on TV and four web sites at once so I am distracted, though I had a pretty nice day, at least until CNN called Texas for Ted not Beto. I did chores, had lunch with a friend, went to a Pokemon Go EX Raid at the invitation of a friend, and despite the rain I even managed to take a walk. Paul and I went to vote together in the late afternoon at our kids' elementary school, with very little wait.

Meanwhile, Adam discovered that he could not vote absentee on the day of the election, so he drove around the Beltway to vote at our polling place. Since he was five minutes away, he came by the house and we went to California Tortilla together (they were giving out free chips and queso to anyone who voted). I'll try to talk intelligently about individual election results tomorrow, so here are some photos of us voting and the sunset! 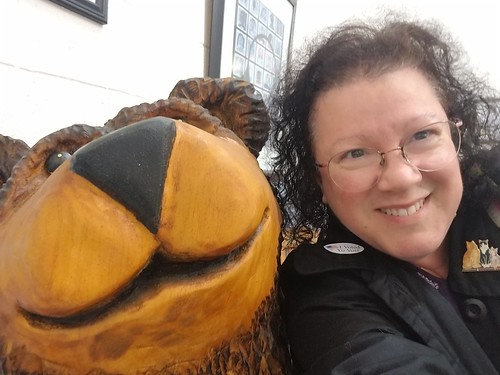 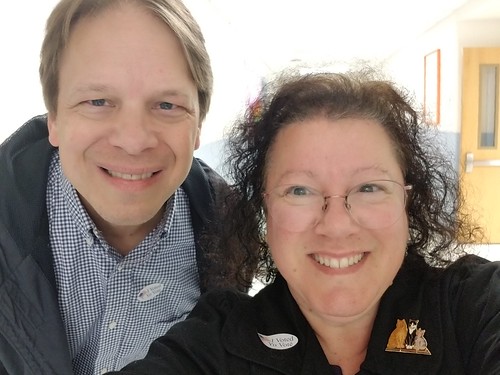 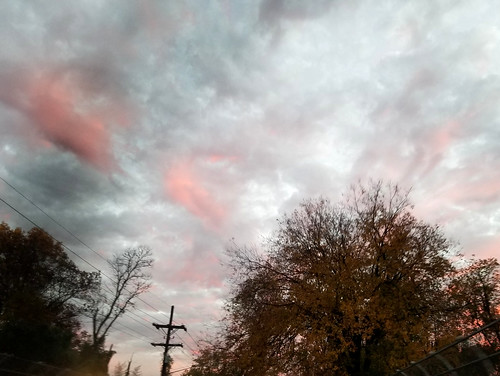