Poem for Saturday and Family Pics

For the Blind Man in the Basilica di Santa Croce, Florence
By Jeffrey Thomson

Our stories can only carry us so far. I know
there are layers beneath the layers and
you haven’t asked but I would describe
a fresco not even finished in the workshop,
discovered beneath damaged plaster here
in the <i>Scuola del Cuoio</i>. A simple Madonna
and child marked off with a draftsman’s
patience, a sketch of faces each etched
with a different kind of cross. Evidence
of a man working out art’s proportions
like a map in the sand: golden mean in
the plaster and articulation balanced
between the bridge in the distance
for scale and the sketched-in step-child
abandoned almost in the foreground,
clutching at the mother’s skirts—all
the necessary work that gets covered over
in the finish, smoothed out and blessed
with plaster and color, that blinding light
cast by the angelic child, mother adoring.
I would describe it all—but that’s easy
and I am not so foolish anymore. I know
you don’t need me to tell you this.
You know the chittering of swallows as
they fill the courtyard of the cloister and
the weight of sunlight on cypress and stone.
If meaning is made of anything you will
have heard it in the sound of great space
that flows down the stairs of the Pazzi chapel,
in the rattle of the tourist dragging
his bag on the pavers as he moves toward
enormous doors flung open into the heat.

It's Adam's last night here before flying back to Seattle with Katherine and Pepper -- by way of Reagan National Airport, which you may have seen on the news today when unhinged and unmasked MAGA-wearing rioters screamed in Lindsey Graham's face about what a traitor he is, and although I am constitutionally incapable of feeling sorry for Lindsey Graham in any way after all he's done, I am nervous both about virus spreading and general lunacy from Trump supporters slinking home after their failed revolution.

We had a pretty quiet day, since Adam had to work and also had an online get-together with the people at the company he left in San Francisco when he moved to Seattle. We did have lunch together and took a walk, and after dinner -- French onion soup, chick'n Provencal, and the leftover chocolate fondue -- we watched Blade Runner 2049 because Adam hadn't seen it and it's definitely worth a second viewing. Some more links about the near-collapse of democracy that I'm adding here for posterity, and some family photos: 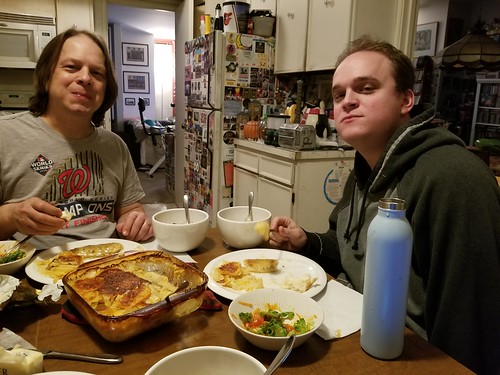 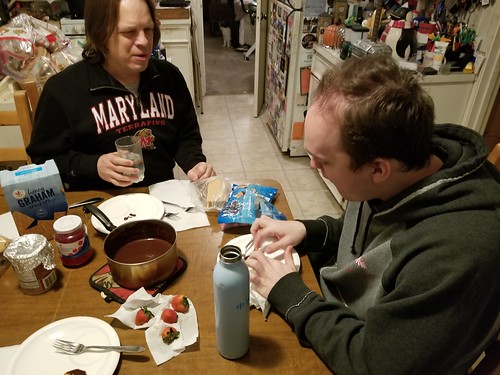 Posted by littlereview at 1:25 AM