There were a bunch of places we wanted to visit Saturday in Delaware before going home, like the Treasures of the Sea exhibit at Delaware Technical and Community College on the discovery of Nuestra Senora de Atocha and its sister ship Santa Margarita, which has a film and many artifacts from the Atocha donated by one of discoverer Mel Fisher's backers, a Delaware resident. There were coral-encrusted swords, a Swiss army knife of sorts consisting of a bosun's whistle containing a fold-out blade, toothpick and earwax-remover, quite a bit of lovely emerald jewelry and several big cannons.

We had intended to see historic Wye Mill as well, which has grinding demonstrations the third Saturday of each month (which this was), but we got a flat tire on the route out from Bethany and lost some time getting it repaired. Fortunately, there was a tire place right across from the gas station where we stopped to figure out what was wrong! We got home mid-afternoon to the usual post-trip laundries and shopping. Younger son's best friend had just returned from his own family's penguin tour, which included Niagara Falls, so they spent quite a bit of time catching up! 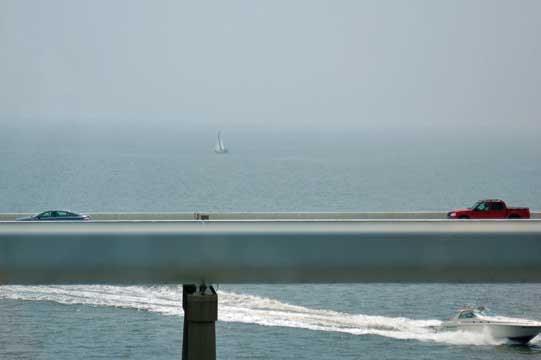 As cars and trucks pass over the Chesapeake Bay Bridge, motorboats and sailboats travel beneath it. 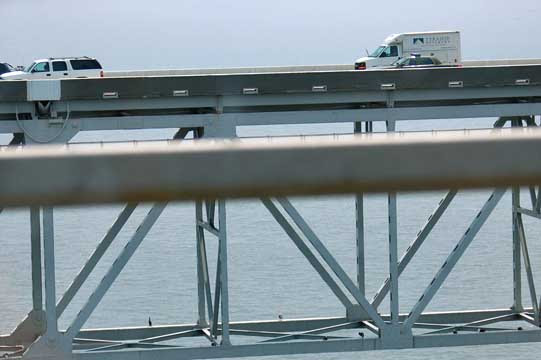 Seagulls and cormorants nest and rest in the metal struts. 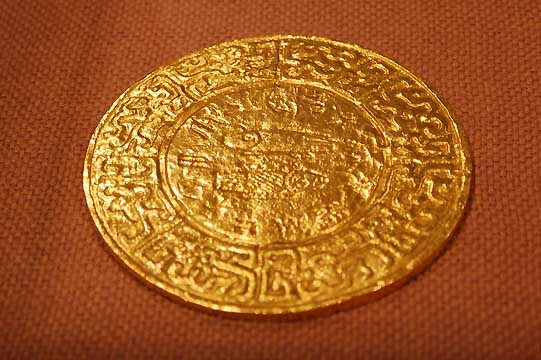 On the drive home, we stopped in Georgetown, Delaware to see an exhibit on the Nuestra Senora de Atocha shipwreck, including big silver bars, cannons and swords. Sea Shell City also had had a few pieces of jewelry from the wreck, but nothing like Delaware Technical College's collection and history of the salvage operation.

Can't deal with talking about world events right now, and I haven't managed to watch Brotherhood (Showtime is rerunning the pilot tonight with the second episode, yay!) I did manage to see the last ten minutes of the Doctor Who season two finale in the course of downloading it, so now I can 1) cry and 2) watch the rest of the second season. And back to the poem, speaking of animals, I am going to go collapse with my cats!
Posted by littlereview at 12:34 AM