I was in the mood for a sword poem because younger son and I watched The Man in the Iron Mask, which I had managed never to see before for reasons that utterly elude me. My two young second cousins (young in the sense that one is now a sophomore at Tufts and the other a senior in high school) were obsessed with the film when it was new, and at some family gathering or other they sang its praises to me so highly that I swore not to see it -- in my defense they were later obsessed with Eminem, and after that we agreed that they could have Orlando Bloom and Viggo Mortensen if I could have Sean Bean (by the time the Harry Potter movies rolled around there was not even a quarrel, as they had declared Alan Rickman and Jason Isaacs hopelessly too old and only wanted the boys who are way too young to be of interest to me). To make a long story short, at some point in the past year it came to my attention that not only had Total Eclipse cured me of my DiCaprio aversion, but that the film also stars Jeremy Irons, John Malkovitch, Gerard Depardieu and Gabriel Byrne, any one of whom would be a good enough reason for me to see most movies. Plus young Peter Sarsgaard as Malkovitch's son -- a dead ringer, it's amazing! -- and Hugh Laurie, whose show I don't even watch, as a very hot royal advisor, and Anne Parillaud of the original La Femme Nikita as the Queen Mother...yeah, I was a dope not to watch this sooner.

Anyway, younger son (whose birthday it is on Thursday) and I greatly enjoyed the film...I like the costumes, the palace decorations with all their secret passages, the grumpy old Musketeers, Irons yet again as a priest who makes rather unorthodox use of his position, Depardieu and his multiple women and his venereal complaints, Malkovitch being heartbreaking after Athos' tragedies (I wondered whether he didn't like working with Leo, because he pulled out of Total Eclipse after River Phoenix died and they recast with DiCaprio, thus paving the way for David Thewlis in the hottest scenes ever), Byrne being noble, Laurie looking good enough to eat and the guilty-pleasure royalty in which it's okay to like a King so long as he's not only an impostor but also illegitimate.

The rest of the day was taken up first with taking younger son to the orthodontist, who read him the riot act about brushing more often -- told me loudly in his presence that he was going to have stained, ugly teeth -- and then meeting with the rabbi about older son's Bar Mitzvah, our first family meeting, in which we discovered just how much of a fight we are going to have with the synagogue if we want my (practicing Christian) in-laws on the bimah and my (agnostic thus not formal convert) husband reading the blessings; this rabbi is entirely sympathetic, coming from an interfaith household (this explains a lot about how a Jewish boy got to be 6'6") but we are going to have to quarrel about policy with the head rabbi. Am planning to bring my mother the Hebrew school teacher in if necessary, since we just invited everyone she knows to the reception! 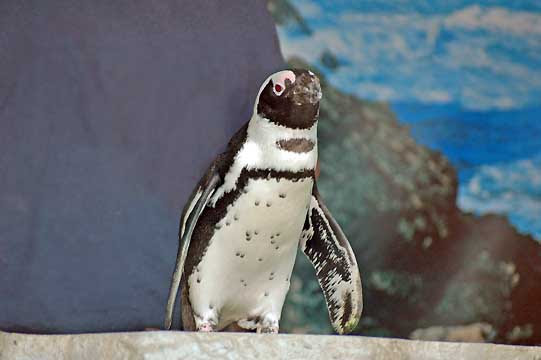 In honor of younger son's birthday, Stanley the Penguin at the National Aviary in Pittsburgh during our trip earlier this summer.

Happy anniversary of the moon landing, something I am unlikely ever to forget due to the day it's on!
Posted by littlereview at 12:11 AM