I'm alongside the Blue Ridge mountains in beautiful Staunton, Virginia, where we have just come from a performance of Macbeth at the American Shakespeare Center's Blackfriars Playhouse -- the only reproduction in the world, apparently, of the enclosed theater where Shakespeare's plays were performed. (It cracks me up that it was American investors who insisted on building the Globe in London and that the Folger, Blackfriars, etc. are here instead of in the UK or even Stratford, Ontario, where we have seen superb Shakespeare in years past.) The lights never dim in this theater, sets are minimal, audience members sit on the stage so it's more like watching a show on a thrust stage than a proscenium and there's a lot of direct audience interaction. They also perform music between the acts -- nearly every cast member plays an instrument -- and for Macbeth they did Sheryl Crow's "Strong Enough" (with the actress who played Lady Macbeth singing) and Steely Dan's "Dirty Work" (with the assassins and courtiers singing). The actor playing Macbeth wasn't particularly impressive compared to other Macbeths I've seen, but Lady Macbeth, Banquo and the Macduffs were superb. And although they did not have hazelnuts, they had fabulous roasted peanuts. 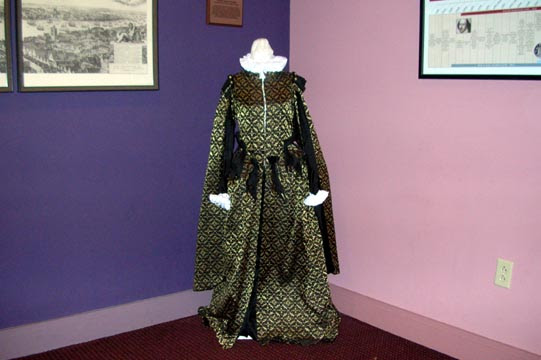 Friday night I could only take photos of the one costume on display in the upstairs lobby, from the very first production at the Blackfriars Playhouse, Olivia's from Twelfth Night... 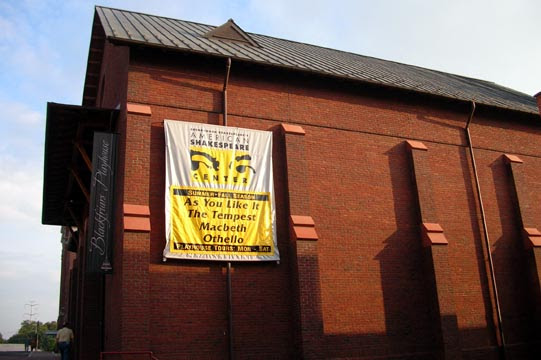 ...and the outside of the theater! We are going on a tour of the theater Saturday, when hopefully we will be able to take photos of the stage, balconies, etc.

My morning was crazy since I had to have everything ready to go so we could get up here, get settled and have dinner before the play. I did manage to crank out several paragraphs on "Spock's Brain" with a long discussion on the slashiness and have not as of yet gotten a single piece of hate mail. It was the kids' last day of camp and we picked them up early so we could go, but I didn't get any mail answered or most comments and I didn't read the news, which was so pleasant that I am considering making that a regular practice.