I have had a perfectly glorious day! We had to get up quite early since the hotel only served breakfast till 9 a.m. even on a Saturday, which left us with two hours before the theater tour at 11, so we went to the Woodrow Wilson birthplace and museum. It's funny, I always think of him as a classic northeastern Democrat -- Ph.D. from Johns Hopkins, president of Princeton University, governor of New Jersey -- but he was born in Virginia in a home with slaves and raised in Georgia and South Carolina, making him a true Southerner. I only ever really studied the war years under Wilson so it was interesting finding out the rest of his career! His father was a Presbyterian minister but the church was out to impress in those days, so they lived very nicely, with a sewing machine before anyone else had one and quite a large house and garden.

From there we went back to the Blackfriars Playhouse to tour the theater, where we ran into the actor who played Macbeth in front of the box office and were given the tour by the actor who played Banquo, a University of Delaware professor and excellent tour guide as well as an excellent actor...Lady Macbeth accompanied us as well, with a tape recorder, though I'm not sure whether she was studying to give the same tour or recording it for the Massachusetts repertory theatre where she has performed and where a replica of the Rose is being built, since a replica of the Globe is being built in Staunton not far from the Blackfriars. It's always great fun to see the costumes and props up close, and we also got to see how "Hell" and "Heaven" work -- the trap doors in the floor of the stage and the ceiling of the theater -- and to stand on the stage and see up close the painting, reminiscent of that in London's Globe, that creates the fake marble and highly decorated tapestries. They're doing the "Bad Quarto" of Hamlet in the winter season and it was interesting to hear the enthusiasm for producing that version, which is shorter and punchier but lacks many of the famous lines from the better known versions ("To be, or not to be, aye, there's the point" is how the major soliloquy starts).

After walking around the stage we drove into Shenandoah National Park and drove the entire length of Skyline Drive through the Blue Ridge Mountains, stopping for a picnic, hiking and many gorgeous views which were slightly obscured by haze but not nearly as badly as the last time we were there, when there was heavy fog in places. While climbing to the Bearfence Mountain summit, from which there is a 360-degree view, there was a deer not five yards from us in the woods, and later, when we were driving a stretch through the woods past the Big Meadows visitor center, there was a black bear with two cubs in the trees just off the road! This is the first time I have ever successfully taken a photo of a bear so close, though I dared not get close enough to get pictures of the cubs. There were more deer with fawns on this stretch of road and we did not see the rattlesnake a ranger mentioned having seen, so it must be declared an extremely successful day in the mountains. Black bear in the woods off Skyline Drive in Shenandoah National Park. 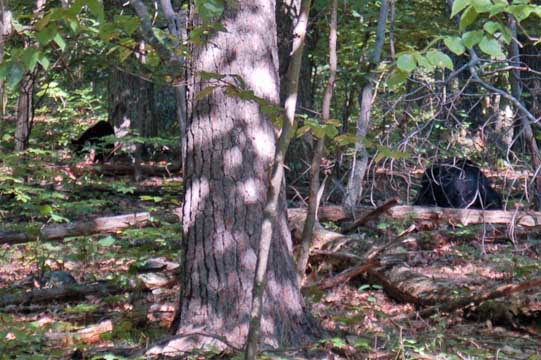 Here she is with one of two cubs we saw climbing with her in the trees. Unfortunately, in all my clearest photos, you can't see her face, but we were just thrilled to see her at all!

I was offline all day and am going to celebrate Lammas on Sunday, so sorry if I owe you any sort of comment, tag or mail! The kids are not in camp next week and on the weekend we are going to New York and Connecticut with my sister, so things are likely to be chaotic and remain so until...well, after the Bar Mitzvah. *g*
Posted by littlereview at 1:06 AM