I am still not at my sister's, but at a hotel in Connecticut somewhere between there and Mystic. My sister and her husband had longstanding plans to go out tonight and we decided not to risk exposing the kids to her daughter while she may still be contagious, so we're going to go to the aquarium ourselves tomorrow morning and however many of them meet us there will be fine, even if none of them end up coming! In any case I think we will stay there tomorrow night unless her daughter's fever goes up again; she said it was down today. Anyone know how long someone stays contagious with Coxsacki? I really do not want to expose my son to anything so close to the Bar Mitzvah (am pretty sure younger son had the virus but none of the rest of us have).

Since we knew early this morning that we were not rushing up to see the relatives and do something in New York this evening, we took our time getting up here and took the kids swimming. Then we discovered Harry Potter and the Prisoner of Azkaban on HBO, followed by Charlie and the Chocolate Factory, which we watched around dinner (chili and cheese in the hotel since we had a suite, cheap and easy), getting the kids into the bath and all that. 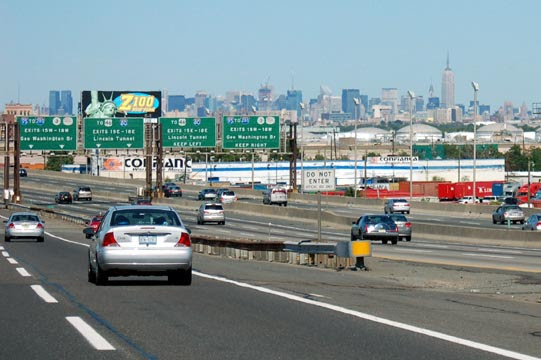 Manhattan skyline from the stretch of I-95 between the New Jersey Turnpike and the George Washington Bridge. A stretch of Meadowlands parallel to the city. No egrets today that I saw. 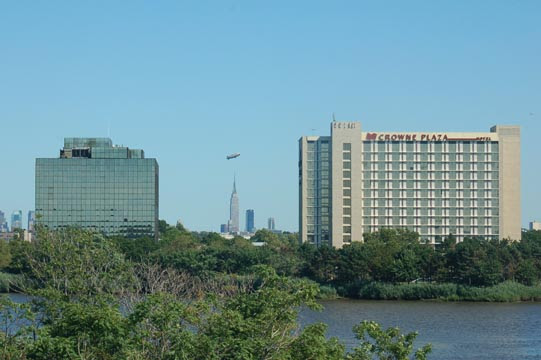 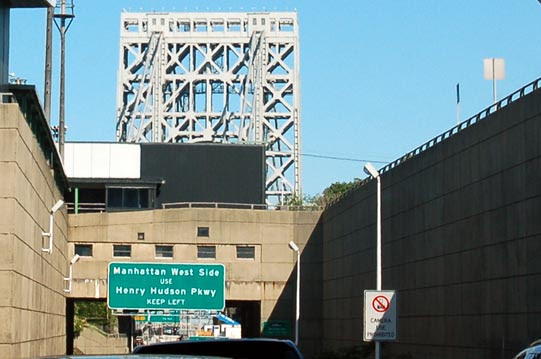 Last time we took this trip, I took photos of the cell phone tree near the Merritt Parkway and the Delaware Memorial and George Washington bridges. This time I got only this photo of the GW bridge, despite a spectacular clear view of Manhattan, because of the sign at right.

Early night tonight as we have a date with a penguin tomorrow. Hope everyone's having as gorgeous a weekend as we have here -- temperatures in the 70s! Whoo! Did anyone see the Perseids -- we seem to be in an area with too much light! Or maybe it's the moon just past full. *makes werewolf howling noise*
Posted by littlereview at 12:09 AM