Once again I am thinking it might be easier to accept Kali as my personal Destroyer than it is to put up with my mother butting into Bar Mitzvah plans, but one pina colada made with Pussers Rum later, I am feeling much mellower than I was earlier in the day and don't even care that she sidestepped my husband to schedule a time to take photos in the sanctuary that suited her own Friday night dinner plans without even asking us first. And now that I am not trapped in a shoe store with her trying to force my kids to buy loafers with idiotic tassels on them because no one has ever in the history of the Jewish people been Bar Mitzvahed in less formal shoes, I can laugh about it. You know you're having a bad day when writing about Kate Mulgrew discussing Alzheimer's for TrekToday is more relaxing than shopping.

In the evening, to go with the pina colada, we watched The Island which was on cable and which we hadn't seen even though it's been on the "to rent" list ever since we realized we'd managed to miss it in the theater. I love dystopian sci-fi, even rip-off dystopian sci-fi with big plot holes and gratuitous action sequences, and I can sit through any PG13 movie with Sean Bean, Ewan McGregor, Scarlett Johansson, Steve Buscemi, Djimon Hounsou and Ethan Phillips even if the second half degenerates into classic Michael Bay with twice the explosions and three times the product placement of any previous film of his I've seen! The view of the balcony and fake rose window (in fact, light meant to mimic the natural light of an English afternoon is beamed through it) from the stage of the Blackfriars Playhouse in Staunton, Virginia. 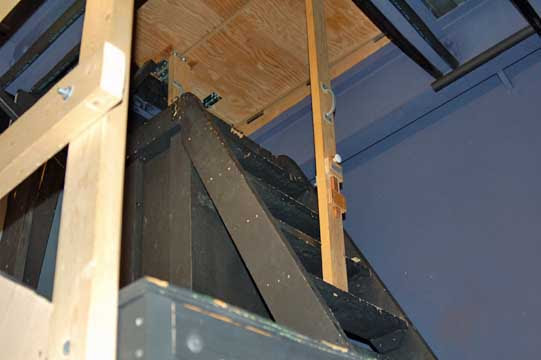 The view from Hell, as the trap door below the stage is known (when we were at the theater for a show, the witches used this to enter and to show Macbeth visions)... ...and a view of Heaven, the trap door in the ceiling! We did not get to see this one in use, regrettably, as there are no divinities or angelic beings in the current production of Macbeth. Close-up of the "marble" and "carvings" around the stage...all fake, painted wood, as it was in Shakespeare's day. (There are a couple of photos of the Globe recreation in London here for comparison.) Props from Macbeth near the trap door where they will be needed. Headpieces in the women's dressing room.

Younger son was playing with his friend across the street after dinner and they invited him to sleep over, so I must retrieve him bright and early!
Posted by littlereview at 12:11 AM