Had a relatively quiet day. Had lunch with my husband at an Indian restaurant we'd never tried before, came home and rearranged all sorts of dorky things in my bedroom because I finally tracked down Romeo & Juliet Barbie & Ken really cheaply (after nearly a decade of looking) and had to shift all my dolls around...now Aragorn & Arwen Barbie & Ken are more prominently displayed, too, and the Irish Legends which have cheap ugly boxes but are rather pretty dolls, and all the Halloween witches are in one place. I saw photos of this year's Target exclusive Halloween Barbie and she looks awesome! I hope I manage to find one in the store this year and don't have to resort to eBay!

Anyway, yeah, I said dorky things...I also split my Lord of the Rings and Harry Potter tags here because they'd become so massive (120+ each), gave Hanover a separate tag from Gettysburg, tagged all the Pattiann Rogers poems I could find because she's the one I end up pimping to people most often and since I had a Sharon Olds tag already I figured she could have one too...hey, if anyone has a favorite poet whose work you've actually bookmarked here and you want to create tags in this journal for that poet, please feel free, as I don't know where all the Whitman, Kenyon, Rilke, Neruda, etc. is! Shakespeare and Olds are the only ones I've tagged regularly!

Watched this week's Brotherhood a day late (and we figured out how to use Showtime On Demand to do it, and now we know they don't run previews for other shows over the closing credits so the episodes can be recorded uncluttered that way, yay!). This is all going to end very badly, I suspect: the brothers are not going to be smart enough to band together against common foes, for the pattern is a lot like Greek tragedy despite the modern vulgar dialogue. A lady of the court gives her hand to a Frenchman, thus breaking an Englishman's heart. 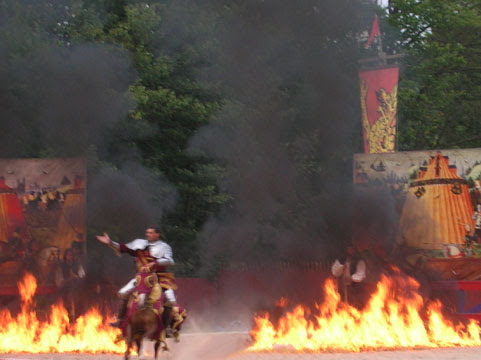 "The Bull" rides in, his horse leaping over the flames. He did a lot of the showier tricks on horseback in the joust, but the guy playing Sir Edward had to fall off his horse twice in the two jousts we saw, which I gather is something that takes enormous skill. 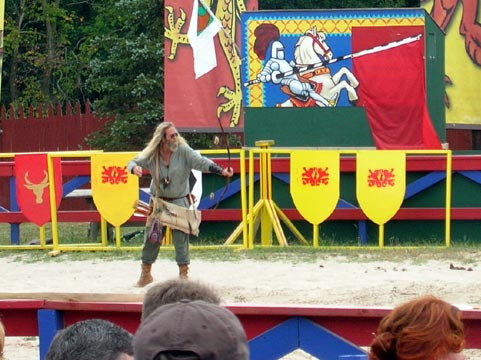 There are also excellent displays of skill with the longbow -- this archer was hitting targets from further than the length of a football field. 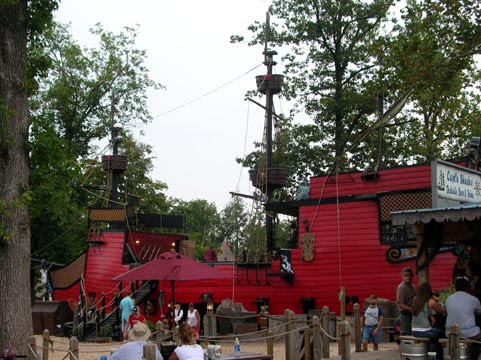 One of the armory shops is a pirate ship. This is very popular with my children despite the frustration of not being allowed to touch anything inside. (Since it was romance weekend and apparently we arrived at the right moment, my husband and his father were given tickets to get me and his mother little sword letter openers at this armory. Sweet!) Of course it is always a pleasure to see a soldier of Gondor... 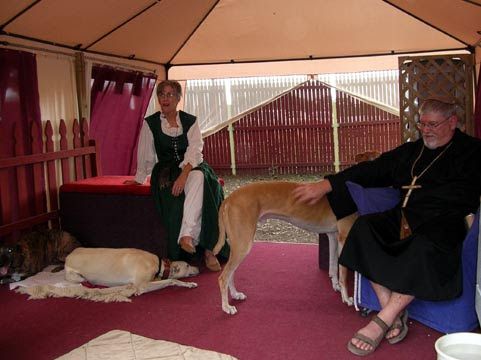 ...or one of the Queen's Hounds, which are actually greyhounds rescued from tracks and various other places. 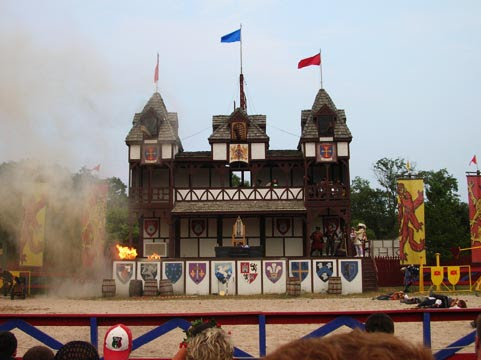 The Pennsylvania Renaissance Faire is always good for tricks with fire at the joust -- there are cannons, explosions and the like.

Tuesday I must decide whether it is worth buying Threshold on DVD or waiting to see whether Sci-Fi shows the episodes pretty complete, uncut and recordable. Do I want it badly enough to own? Nah, should save the money for Mission: Impossible!
Posted by littlereview at 12:24 AM