This is Mabel, who had a worse day than I did, on account of being a pig, and being so severely overweight that she can't see, and having only a fan and some shady trees at Star Gazing Farm to help keep cool rather than air conditioning at least part of the 100+ degree day, and having visitors on the Montgomery County Farm Tour & Harvest Sale getting into her personal space, and having had water splashed in her face by a volunteer to wake her up and make sure she was drinking enough: 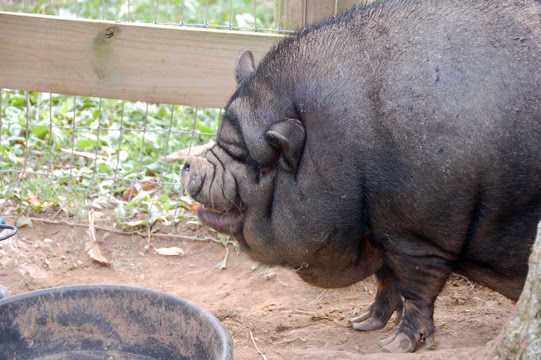 Our visit to Mabel, and Gruff the sheep and Mr. Norman the goat, and various chickens, ducks, geese, cows, donkeys, horses, and other animals at Star Gazing Farm (plus the lucky bunnies in the air conditioned bunny room), was the highlight of my day. In the afternoon Verizon sent a firmware update to my phone that completely wrecked the calendar application, and since apparently every calendar application for Android requires the the built-in one be operating and able to sync with Google Calendar, the only way I could get my calendars to work on my phone involved a lot of communication with idiots at Verizon, research on Google Forums, and the slow conclusions that 1) there is no way to fix a software problem in Android besides a factory reset or root, both of which wipe out all data on the phone, and 2) Android therefore sucks just as much as everyone says Windows does.

Why did we waste all that money on these crappy phones and why why why did I not listen to everyone who told me that for all Apple's faults, it is less heinous in so many ways than the Google-Verizon attempts at world domination?
Posted by littlereview at 12:47 AM