When the swordsman fell in Kurosawa's Seven Samurai
in the gray rain,
in Cinemascope and the Tokugawa dynasty,
he fell straight as a pine, he fell
as Ajax fell in Homer
in chanted dactyls and the tree was so huge
the woodsman returned for two days
to that lucky place before he was done with the sawing
and on the third day he brought his uncle.

They stacked logs in the resinous air,
hacking the small limbs off,
tying those bundles separately.
The slabs near the root
were quartered and still they were awkwardly large;
the logs from midtree they halved:
ten bundles and four great piles of fragrant wood,
moons and quarter moons and half moons
ridged by the saw's tooth.

The woodsman and the old man his uncle
are standing in midforest
on a floor of pine silt and spring mud.
They have stopped working
because they are tired and because
I have imagined no pack animal
or primitive wagon. They are too canny
to call in neighbors and come home
with a few logs after three days' work.
They are waiting for me to do something
or for the overseer of the Great Lord
to come and arrest them.

How patient they are!
The old man smokes a pipe and spits.
The young man is thinking he would be rich
if he were already rich and had a mule.
Ten days of hauling
and on the seventh day they'll probably
be caught, go home empty-handed
or worse. I don't know
whether they're Japanese or Mycenaean
and there's nothing I can do.
The path from here to that village
is not translated. A hero, dying,
gives off stillness to the air.
A man and a woman walk from the movies
to the house in the silence of separate fidelities.
There are limits to imagination.

I spent a lovely Sunday with Dementordelta and my family, beginning with an early start so we could see the earliest IMAX 3D showing of Deathly Hallows, Part Two in Silver Spring. We had excellent seats and the theater has a fantastic sound system, plus I love the huge screen, but I must admit that I didn't particularly notice any improvements in 3D apart from a few tricks with smoke and sparklers. I did enjoy the movie just as much -- I think the pacing is considerably better than Deathly Hallows, Part One and The Half-Blood Prince, though some of that may be that both those books are so bloated that it's hard to put together a film that doesn't drag in places. Spoilers: There were really two things that I wanted from this film: that we not see Snape's body nor any indication beyond Harry's belief that he is dead, because Rowling did a weaker job of killing off Snape than Meyer did of killing off Spock or Smallville did of killing off Lex Luthor -- she could very easily bring him back, and so can we -- and that the Malfoys survive and thrive just as they did in the books. And I got my way on both, plus the character who'd been utterly ruined for me in the book did NOT get much screen time. None of the other film changes bothered me much.

We walked a bit through the Silver Spring outdoor market, then came home for lunch. Then we went to Claude Moore Colonial Farm for the summer Colonial Market Fair. It was hot out but not bad in the shade, where we walked through the market stalls (there are jewelry, soap, clothing, household goods, teas and spices, books and prints, candles, plants, and toy vendors, plus hard and soft drink stands, chickens being roasted over an open pit, corn, bread, cheese, watermelon, and various snacks). We missed the fencing demonstration and watched the juggler from a distance, then took a walk around the farm, which has a tobacco barn and a little farmhouse -- there were fewer pigs than the last time we visited, just one adorable one that was being trained for shows since it's so friendly, and a few sheep, cows, turkeys, chickens, and geese. The birds were all in cages as they had apparently been chased by an obnoxious kid (one wonders whether he could have been more annoying than the much too young kid behind us at the movie earlier). 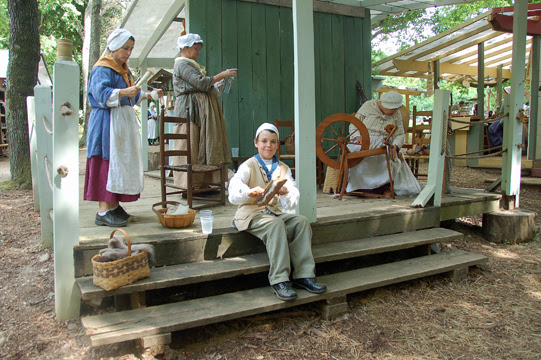 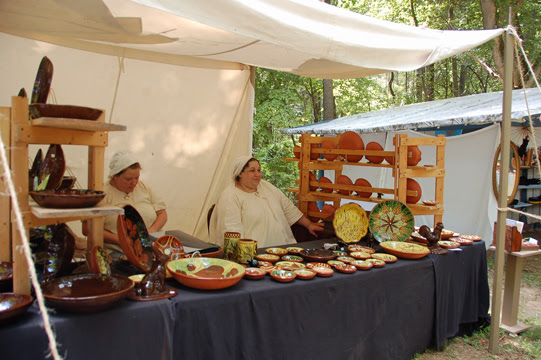 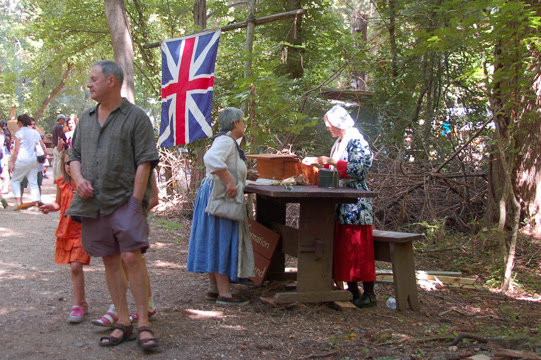 We came back in the late afternoon where Delta and I watched -- wait for it -- The King's Speech (hey, it has been weeks). Then we had to watch the scenes in National Treasure 2 filmed at the same locations. Eventually she had to go home, and my family has just spent hours around the endless scoreless Red Sox game (Orioles won, Nationals lost) and an attempt to watch Matinee (MANT 1, Nukes 0) unsuccessfully trying to figure out where older son's driver's ed packet has vanished considering that he starts class on Monday.
Posted by littlereview at 12:02 AM