A Short History of the Apple
By Dorianne Laux

The crunch is the thing, a certain joy in crashing through
living tissue, a memory of Neanderthal days.
— Edward Bunyard, The Anatomy of Dessert, 1929

My kids are with my in-laws in Pennsylvania, so Paul and I had the day to ourselves. We had ambitious plans, but that was before we knew it was going to be 96 degrees. The Nationals and Pirates were playing a double-header, but it was much too hot to sit in the sun in the cheap seats, and we thought about going to Annapolis to take a boat ride and have tea in the old tavern, but the traffic heading to and from the beach looked pretty daunting on the highway cameras.

So we went to Alexandria, where we walked along the river under the trees, had lunch at Bilbo Baggins -- onion soup, baked brie en croute with apricot chutney, spicy cilantro creole fries -- then went to the Torpedo Factory, where we visited many of the studios and the Alexandria Archaeology Museum which is on the top floor. I've loved Larry Morris's sculptures since I first saw them as a child, and I particularly liked Alison Sigethy's Sea Cores. 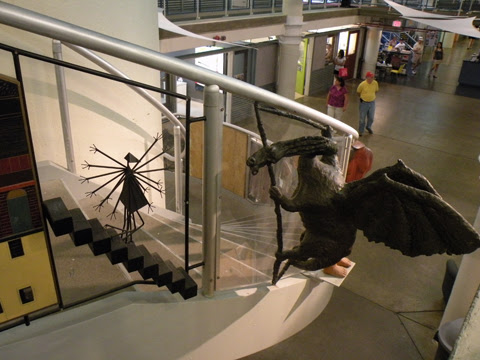 Larry Morris's "Nude Descending a Staircase" (based on Duchamp's) in the stairwell at the Torpedo Factory, overlooked by a dragon. This is Morris's "Escape Artist" in his studio. Before it was an art center, the 1918-era Torpedo Factory was, in fact, a torpedo factory and naval recruiting station. After serving as storage for dinosaur bones for the Smithsonian, the building also houses the Alexandria Archaeology Museum, which preserves items found under current buildings from the city's long history. Artists sometimes decorate outside their studios as well as within. I believe this one belongs to Marcel. This is one of Alison Sigethy's Sea Core sculptures. The building faces the Potomac River. The studios facing the river aren't the most accessible to shoppers, but I'd think it would be worth it for the views.

Since I knew my kids would not mourn about missing Colin Firth, since I've tragically managed to make them sick of him by watching both Bridget Jones movies in their presence -- apparently they spent the day walking around York and playing Frisbee and having pie -- we watched three episodes of Lost Empires, which I am enjoying a lot despite less than ideal video quality and plenty of melodrama. Colin does Sean Bean's accent very nicely and it's always entertaining watching him lose his virginity.
Posted by littlereview at 12:01 AM