I spent the morning doing things too disgusting to discuss in a public journal. They involved my kids' bathroom floor, my kids' clothes, lots of bleach and an absurd amount of lotion on my hands afterwards to make up for detergent burn. Icky yucky blecch. And then I couldn't even shower properly afterward, because, having run two loads of laundry and the dishwasher, there would not have been enough hot water for nearly half an hour and I wanted to get out of the house while the sun was still shining, so I spent the entire day smelling of chlorine and vanilla hand lotion which is not a great combination at all.

We were originally going to go down the canal to the lockhouses but it was so late by the time we left that we punted and went to Great Falls (heading in the direction of the river being on the agenda anyway because we needed things at the co-op). Great Falls was quite spectacular -- ice on much of the canal, snow on most of the grass, mud and water everywhere else, hawks in the sky, sunlight so intense that it was making rainbows in the air above the spray...well, photos below so you can see your yourself.

We were going to watch Ray tonight but by the time the kids were done showering, cleaning, homework, etc., it was too late for a two and a half hour family movie and if we'd waited till they were in bed it would have been too late for a two-hour grownup movie, so instead we all watched Ferris Bueller's Day Off, which the kids had never seen before and which I had not seen in its entirety in I don't even know how many years. It made me very, very nostalgic for Chicago, though not for '80s haircuts. I want to go to Wrigley so badly right now, and it's not even baseball season.

My very oldest friend (have known her since I was six) and her husband have had a Superbowl party every year since they got married, and have simply expanded to include children as people produced them, so we are all going to their large bash which generally breaks up around halftime so the younger kids can get to bed at a reasonable hour (hence we missed the Nipple Incident last year as we were in the car). So tonight I will be stuffing my face, catching up with people I have known since before high school and feeling completely ambivalent about the game, since my in-laws are New Englanders but there's a player on the Eagles who went to my kids' elementary school. I expect the Patriots to win but I think I'm pulling for the Eagles. 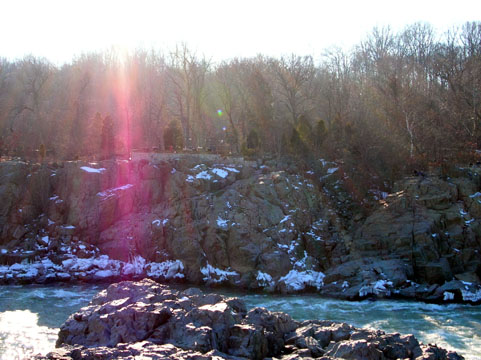 One really had to squint to look across at the Virginia side of Great Falls Park, as the sun was extremely bright and situated just behind the major overlooks for the park there. 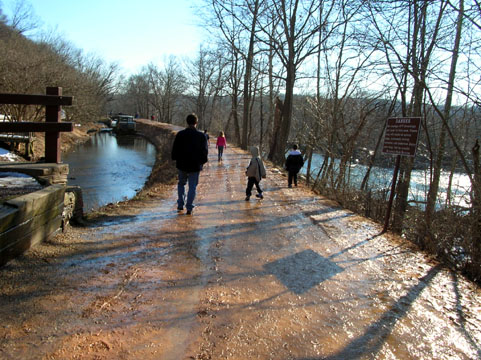 The canal towpath is mud, mud and more mud! That's the canal and barge on the left, and the Potomac River on the right. 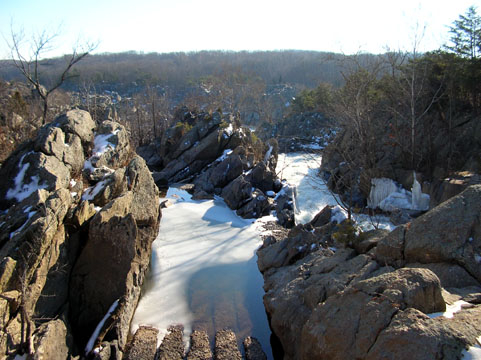 Here the river is a sheet of ice on the left where it's dammed from the refuse of Hurricane Isabel, while on the right it's tumbling down thunderously. Note the ice caked around the tree roots in the middle right. 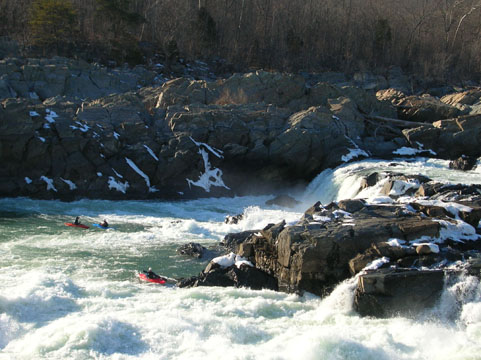 Kayakers brave the extremely cold water and the rapids. 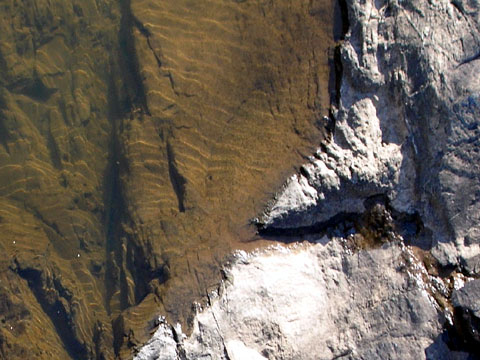 Beneath the rock and ice, sunlight on the ripples on the water. 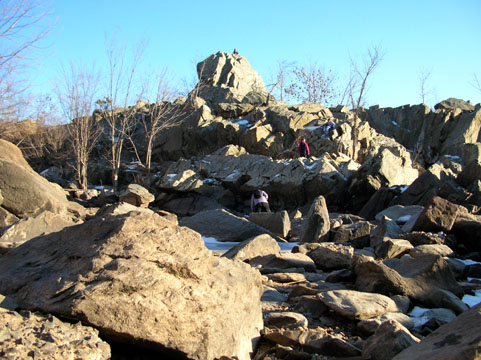 That's my son at the top of the high rock atop this cliff. 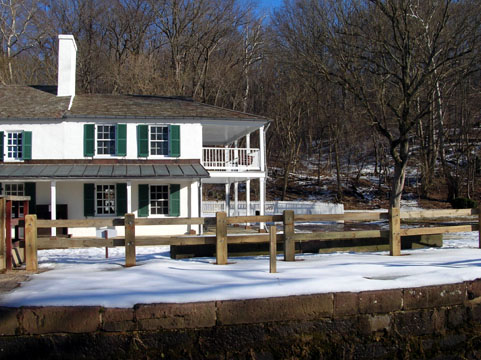 The tavern, which is also the visitor's center and park headquarters, seen from the far side of the lock with snow covering the grass.
Posted by littlereview at 12:23 AM