Posted by littlereview at 12:14 AM No comments:

Posted by littlereview at 12:03 AM No comments:

I had a Stupid Day, as I kept forgetting to do things I needed to get done while doing other things that were unnecessary. Going to drive my older son's carpool, for instance: I had totally forgotten that he had a field trip canoeing on the Anacostia River, and that they were getting back to school so late that
Posted by littlereview at 12:11 AM No comments:

So Tuesday night's Veronica Mars really pissed me off. I did see some local animal news that made me smile: a baby porcupine was born at the National Zoo (and has no spines yet, just red fur) and an expectant duck who made her nest in front of the Treasury Department has Secret Service protection for her eggs. Okay, it would be nice if the people living in the district got as much protection as the animals, but it's nice to hear happy animal news anyway.

Had lunch today with my mother, who is going to Florida with my father for a week (someone please remind me to pick up their newspaper in a comment tomorrow around lunchtime). Mailed a bunch of packages that have been sitting for weeks waiting for me to get the rest in order and get them out...
Posted by littlereview at 12:04 AM No comments:

My work hate mail is back to...well, hate mail, now that people are back at work themselves and not writing from their personal addresses. In the Enterprise review round-up this week I didn't include Jammer because, frankly, I've stopped checking his site particularly on weeks where we have more than eight reviews to include already, since his are pretty much never done within a week by the time the roundup is posted. He gave "Bound" one star and called it one of the worst episodes ever. I also pretty much never include Cinescape since they don't review every episode and when they do it tends to be a preview short, not a full review, and they rather liked "Bound." So over on the BBS I am now getting bashed for 1) obviously choosing only negative reviews, as I left off Cinescape, even though it is noted by the same people that I 2) left off Jammer, who thought the episode sucked like a sucking thing. I wish people would decide whether I am guilty of gross negligence or a deliberate and evil attempt to sabotage Enterprise by citing only bad reviews...

My day elsewhere involved packages, kids, late afternoon sun serving as a distraction, fighting with dreaded amnesia!fic that is going to be a long scary mess and must be finished by July 16th (of course I wrote the climax first), fighting with even more dreaded fic that I dare not even name, neither the title nor the fandom and certainly not the pairing as
Posted by littlereview at 12:05 AM No comments:

Sunday my older son had a meeting (possibly the final one, for now) with his science group from school, so we drove out to watch them rehearse their class presentation which needs to be somewhat more detailed than the brief one they did for the school science fair. Then we went to Borders, which kindly sent internet users 25% off coupons good this weekend only and because
Posted by littlereview at 12:39 AM No comments:

Today was taken up with work, younger son's soccer game (they tied) and relatives. My in-laws drove down from Pennsylvania to spend the afternoon with us and come to the seder at my parents' house, along with
Posted by littlereview at 1:10 AM No comments:

Happy birthday, William Shakespeare. Would that I were in Stratford-upon-Avon for the birthday celebrations this weekend. (It is not, in fact, known for certain whether Shakespeare was born on April 23rd, but assumed based on the record of his baptism three days later; it is, however, known that he died on that date, aged 52. Imagine if he had lived and kept writing until he was 80.)

Here is my "In a Mirror, Darkly" review for TrekToday. I rather enjoyed it, though I didn't think it was a particularly good episode -- well-filmed and entertaining to watch, sure, with a lot of fun production details and some fun performances, but it seems pretty trivial to spend two of Star Trek: Enterprise's last episodes in the alternate universe which makes no contact with the familiar one. The good news is that I expect to receive far less hate mail about this week's review than I did last week. I decided to take the plunge and write a column about those letters, because I was so disturbed particularly by the virulently homophobic ones (I couldn't care about the ones calling me "feministic" and "lesbianic" though I do object to "frigid," heh). Now I am getting even more hate mail, though I am also getting some thank yous, so it will be interesting to see which wins out. I also finally got up the review round-up from "Bound" and was delighted at how many other reviewers thought the episode was terrible...some for reasons of sexism and heterosexism, others just because it was so stupid.

Had a relatively uneventful day, other than writing and reading rants...had lunch with
Posted by littlereview at 1:18 AM No comments:

Tonight we watched last night's Smallville, "Heathers Meets Carrie" (that wasn't the episode title but it might as well have been). It had no Lionel and not nearly enough Lex, but it did have

Besides lunch with
Posted by littlereview at 12:25 AM No comments:

I have had an utterly chaotic day...entertaining, but I am so behind on everything I could cry. My sister and her family are leaving town tomorrow, so we were trying to fit in as much time seeing them as possible. I had a quick lunch with
Posted by littlereview at 12:28 AM No comments:

I am pleased to report, my master mistress, that I have found

...because we saw these after lunch at Target and managed to resist buying them in favor of pirate ships, but could not resist the idea of photos of Anakin and Obi-Wan together at last. (Note: No book or movie spoilers, only large action figures behind the cut.)
Posted by littlereview at 4:40 PM No comments:

Quieter Tuesday than Monday -- sister and her family were downtown sightseeing most of the day, older son had his model seder at Hebrew school so wasn't terribly hungry for dinner, younger son did his homework quite willingly because I told him that we could go to the card store afterward to see if we could find a Slivers Magic deck, if that is even the right name, for older son and some new pirate ship card game for him. Turns out the card store had neither -- the Slivers cards are a couple of years old and quite expensive on eBay (hey, anyone around here have a used deck in non-mint condition that your kids no longer want that you're willing to part with for less than mint-condition prices?) and the pirate game wasn't cards exactly. Then
Posted by littlereview at 12:49 AM No comments:

I had an insane Monday -- mostly good-insane, though seriously marred by my not being able to find
Posted by littlereview at 12:14 AM No comments:

Sunday was indeed busy, though not in the ways I expected. Because there had been such an explosion of Star Trek news yesterday, news was relatively light today and I wrote an article about the movie Shatner is making for the Sci Fi Channel...I know that TrekUnited announced tonight that the good fight was over, and there are allegations of all sorts of misdeeds being passed around, but other than to glance through my mail about it I did not read any of the public posts and I officially have no opinion on the campaign that's any different than the opinions I stated when the play to raise $30 million to buy another season of Enterprise was announced. I know there are people saying they're sorry that it's officially over, but I felt that it was officially over the day UPN announced its plan not to renew the series. This has always been about money and ratings, and I'd rather fight for a really good Star Trek that people will watch than for another year of a show that couldn't make it even with a Paramount budget, a decent cast and better writing than it had when it started out. And let me add that by "really good Star Trek", I do not mean that I want a new vision a la JMS or Galactica -- I want what Gene Roddenberry was doing in the first place!

My in-laws arrived in the early afternoon and we had a low-key day with them, walking with their dog, enjoying the spring and showing them trip stuff. My sister and her family never arrived -- apparently one of her kids was sick, but I heard this only third-hand when I called my father to ask what the deal was -- so I am not entirely sure what is going on there. We brought in California Tortilla for dinner and watched the pets circle each other suspiciously under the table. In the evening when they left I watched Desperate Housewives, which could easily become a guilty pleasure -- I rationalize that I really need to keep up with it for Get Desperate! but CSI Files has never made me feel any need or desire to watch any of the CSI shows.

I must wake up very early as hubby has to see an orthopedic surgeon about his knee, so I had better go collapse. Still many pretty flowers. Sinuses still clear. Head still foggy though. Am confused. 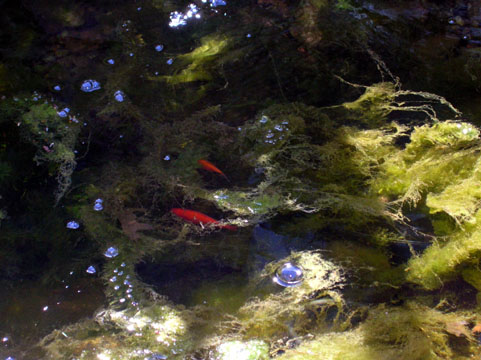 The house in our neighborhood by far most likely to win some kind of garden award is this one, which in addition to having very lovely annuals around the borders of its garden also has this fish pond with fountain in the middle, with the walkway to the front door built right over it. Here you can see the sunlight on the water, the bubbles from the fountain, the fish, and the greenery which already seems to be growing out of control this spring.

Posted by littlereview at 12:09 AM No comments:

Had an insanely busy day...had to get up early for a Saturday to get ready for my younger son's Hebrew school's model seder (this year we only had to bring seder plates, not hard-boil eggs for 40, at least). This was fun, as my mother is a Hebrew school teacher and it's been a family event since my older one started attending the nursery school there nearly 10 years ago. Then we came home, rushed to change and went to the younger son's soccer game (they won again) while older son played at a friend's house. Picked him up on the way back (
Posted by littlereview at 12:50 AM No comments: