From Pennsylvania In A Thunderstorm

Having a lovely time in Hanover, where we arrived early this afternoon. There was a Dutch Craft Fair going on today so we went and walked around the tents -- Dutch here meaning Pennsylvania Dutch, meaning lots of furniture and food and some jewelry. Then we went out for an enormous dinner at the local Chinese buffet, being my younger son's favorite sort of restaurant, since we were celebrating his birthday belatedly with my husband's parents. Both kids got these arm things that shoot little discs (oh joy) and he got a build your own T-Rex skeleton, so he is very happy even though he doesn't know he's also getting a GameCube game but not till right before coming home so he doesn't get bummed that he can't play it while visiting here.

Tonight the local symphony did a free concert of patriotic music which we listened to a little of, since it was outdoors at the YMCA next door to this development. We saw lots and lots of bunnies and groundhogs but they were on the far side of the hill -- the dreaded Wal-Mart side -- on the way to dinner, so I have no pictures! The only wildlife photo I got in the backyard was of a big scary cat that had caught a bird. Woe. Also, Maximus appears to be a bigamist; there he was, all big and HUGE, with at least four littler groundhogs around him, and perhaps some of those were his adult children but they looked suspiciously amorous. 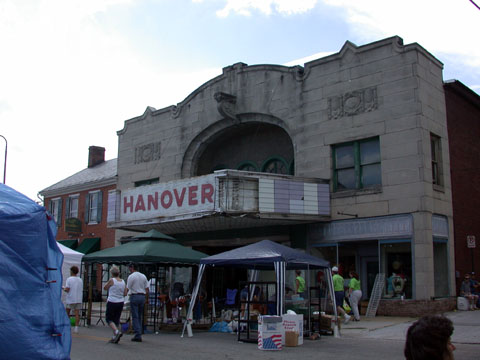 The old, abandoned Hanover movie theater, with some of the street fair visible in front. 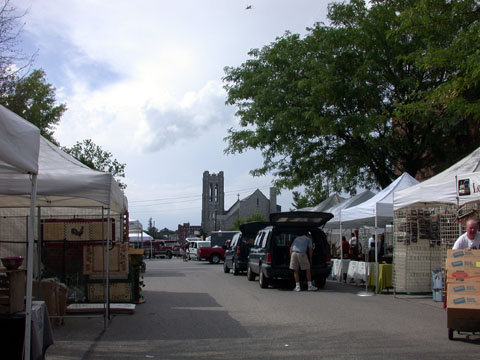 St. Matthew's Lutheran Church, with the seventh largest organ in the world, in the distance behind the Dutch Craft Fair. 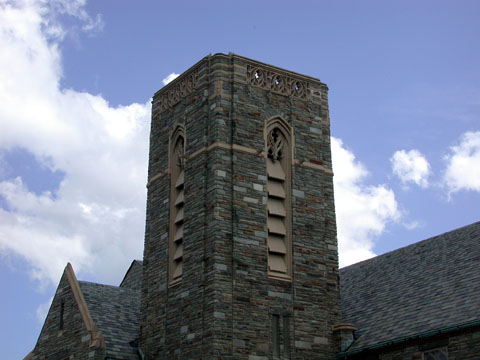 And the First United Methodist Church of Hanover, because I promised

I finished The Far Side of the World, which is one of those books that just gets better every page, and so completely different from the movie particularly near the end! I was very lukewarm on Stephen in this book; on the one hand he defends the Polynesian Amazons and the reasons women might wish to shun men forever in the sort of world they all know, but on the other hand he's still a raging hypocrite when it comes to women terminating pregnancies; he'll try to save one from dying from it but he won't help her avoid getting into a near-death situation to begin with. Well, he's a great improvement on that misogynist Martin anyway -- ick. I loved Stephen thinking of Diana dancing while defending women who enjoy sex and frolic and don't want to sit home taking care of babies when he and Martin are arguing about bird nesting behavior. And Jack is so gay in this book that it makes up for anything I didn't like (worrying like an old woman, hee). Ahh, desert island fantasies. Favorite quotes tomorrow night if I can get to them.
Posted by littlereview at 9:23 PM No comments:

Rush rush rush to Pennsylvania this morning and back tomorrow evening, so I am way behind on everything as usual again (and we are going out of town for two weeks a week from today so ain't gonna get better before it gets lots worse). Had better remember to post in
Posted by littlereview at 10:23 AM No comments:

Poem for
Posted by littlereview at 12:28 PM No comments:

GIP courtesy
Posted by littlereview at 11:00 AM No comments:

We were watching the Hornblower episode The Wrong War last night and noticed there was a documentary on the disc hosted by Edward Windsor. Somehow this did not ring a bell and make me say "Oh, Prince Edward" until he showed up onscreen. The documentary was quite good -- a history of British naval warships, with interviews with the historians on the HMS Victory and officers on the current HMS Manchester -- but Edward himself was really quite a revelation, sounding like a cross between Eric Idle and Ian McKellen and having a good sense of humor about atrocious aristocratic behavior, naughty sailors, naval tradition and toasting the Queen. He seems unsnobbish and fairly intelligent. Why is he not the most popular member of the Royal Family?

Anyway, The Wrong War was probably my least favorite Hornblower thus far, despite better visuals than some of the earlier ones and more homoerotic potential than I knew what to do with (I know I'm supposed to be slashing Horatio/Archie at this point in the series but I'm all about Captain Pellew, I can't help it). I appreciated Archie's "I don't want to die in someone else's bloody war" sentiments, but I felt like the actor was a bit over the top in several scenes and the guy playing the Marquis seemed to have gone to the John Cleese School For Playing Outrageous Foreign Aristocrats. Maybe it was the director, as even Hornblower had a few moments where I wanted to tell Ioan that we got it, he didn't have to keep making SUCH an agonized face.

But speaking of Hornblower, yesterday I got the remaining books in the series so now I can actually read them when I finish O'Brian. And in the mail I got a package that made me SO happy. When we were in Stratford-upon-Avon a year ago last April, I bought a little tin of tiny round mints made by the Chambers Candy Company with Shakespeare on the front. The mints lasted until about four days after we got home from England, then I started using the tin as a pillbox and became frantic for more mints. But I discovered that Chambers Candy didn't export directly, while their US distributor Christopher Brookes only sold in huge quantities for retail and none of the stores around me seemed to carry them.

Last week while researching the colors of Smarties for a Snape/Lupin story -- never say that fan fiction is not educational -- I discovered British Traditionals, which not only has my Shakespeare mints but aniseed comfits, and Williamson & Magor tea in elephant tins as well! And Smarties too. And my order arrived with a free tin of mints with angels on it. I am blissful.

It rained so hard this morning that our sump pump has been running every few minutes for the past two hours, even though the downpour stopped by 8:30. I had to Drano my tub drain and have not even braved the shower yet. Lazy day.
Posted by littlereview at 11:08 AM No comments:

I don't really know where yesterday went; I don't seem to have accomplished anything of note other than writing some unpostable smut with
Posted by littlereview at 10:28 AM No comments:

Posted by littlereview at 12:04 PM No comments:

Science Museum With A View 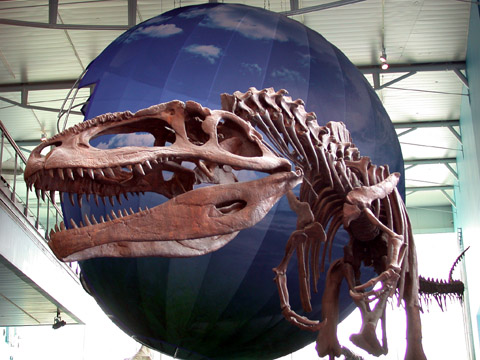 The Maryland Science Center is twice as big as it was when we had our older son's birthday party there two years ago. 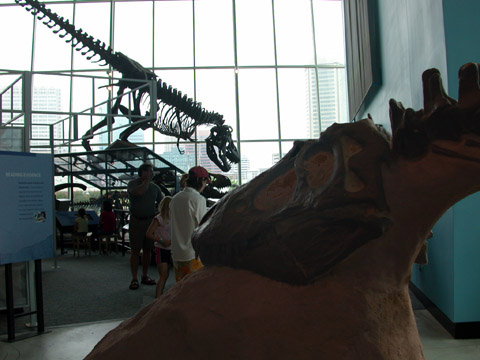 This is the dinosaur exhibit at the newly renovated museum, with some of the Baltimore skyline visible out the windows. 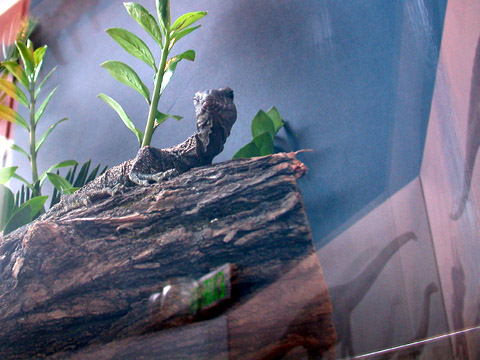 The dinosaur exhibit also had more modern lizards, but you can see the reflections of the dinosaur display in the glass of this guy's cage. 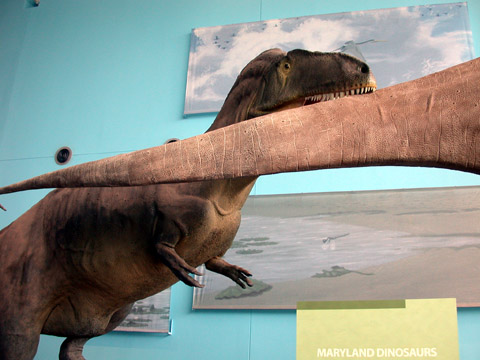 The Baltimore area as it looked a few years ago. 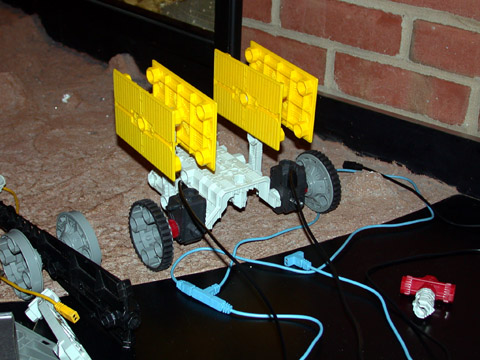 You can also design and test drive your own Mars rover... 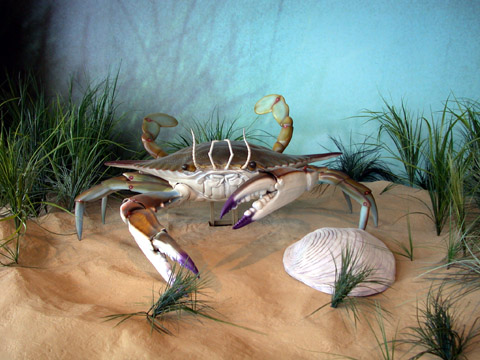 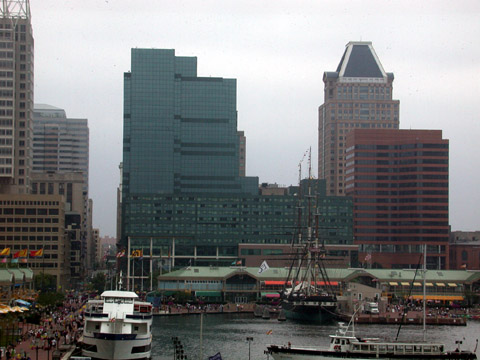 ...look out the big windows at the Inner Harbor and the post-game crowds after the Orioles blew it to the Twins... 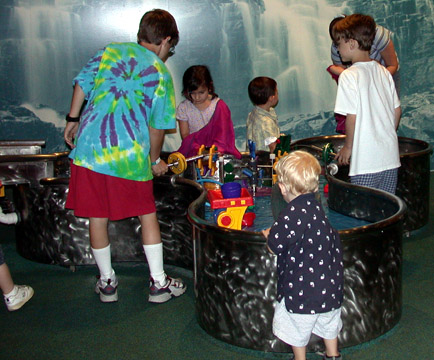 ...play at the water tables in the kids' area, where one can design contraptions with pipes, make water volcanoes erupt or squirt one's siblings... 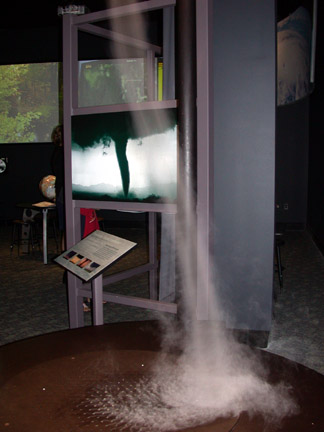 ...or visit the environmental exhibit, where there's a device that creates tornadoes.

After the Maryland Science Center we walked to Harborplace to browse, but left fairly soon as it started drizzling and was getting crowded with post-Orioles dinner crowds. The only drawback to the afternoon was horrible traffic on the Beltway going past the Mormon Temple, which we wrongly assumed at first might be baseball crowds headed all the way to Baltimore (as it turned out, the traffic even right past the stadium wasn't bad). When we went around one of the S-curves, we could see fire trucks, EMTs, road crews, police and a crane blocking two lanes next to a shattered barrier. Later we learned that a tractor trailer carrying mail had slid off the road and hit the barrier, jackknifing and hitting two cars. The lanes had been closed since before sunrise. I'm glad no one was seriously hurt, based on how bad the accident looked, but a little worried about packages I'm expecting, as the mail was apparently totaled as badly as the mail truck.
Posted by littlereview at 10:34 PM No comments:

Posted by littlereview at 11:47 AM No comments:

Poem for
Posted by littlereview at 11:30 AM No comments:

My children demanded television rights for the evening to watch The Fairly Oddparents Channel Chasers, which I expected to hold as little interest for me as most cartoons. Instead I have spent the past hour laughing my head off. Timmy gets a remote control that lets him travel through TV-time, where he meets his adult self who's like the Ghost of Television Past. So far they've parodied Peanuts, Scooby-Doo, Sesame Street, Blue's Clues, Speed Racer, Rugrats, The Simpsons, Dragonball-Z, Peter Pan and several Christmas specials among other things. Oh, and Billy Joel's Glass Houses. If you get Nickelodeon, it's on again tomorrow night at 8:00 p.m., and Sunday at 4 p.m. and it may not have aired at 8 p.m. yet tonight in Mountain or Pacific time. It is truly hilarious.

Also,
Posted by littlereview at 9:18 PM No comments:

I am never going to catch up on my life; it's that simple. How in hell did Martha Stewart do it for so long? Does one have to be a crook with a team of cronies?

Also, sex with Legolas. I mean, he's not really my type but how bad could it be?

Your sex with Legolas would be more like making
love. Sweet and tender, romantic and loving...
Probably occuring in the forest of Lothlorien or
Mirkwood under a star studded sky, it would be
long, slow and sweet, most likely with Legolas
gently whispering beautiful Elvish poetry in
your ear. Could anyone really ask for more? :)
What Kind Of Sex Would You Have With Legolas?
brought to you by Quizilla
Posted by littlereview at 11:29 AM No comments: 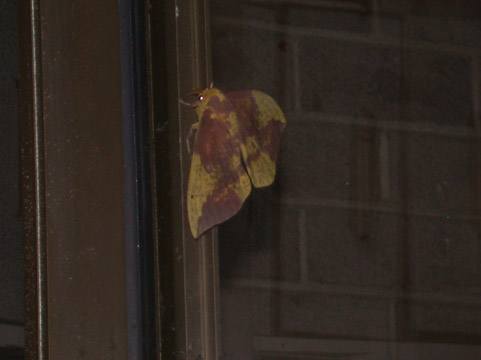 This moth is easily five inches across with its wings spread; I've never seen the like before. Does anyone know what kind it is? 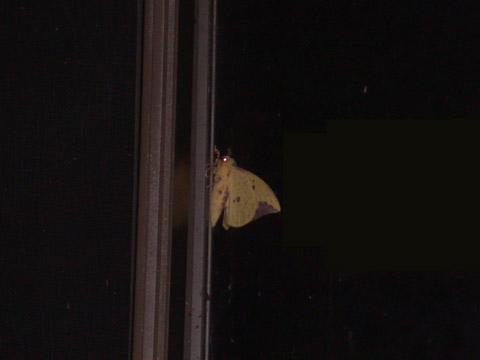 It doesn't have big red eyes when you look at it, by the way; that's what the flash did to it. 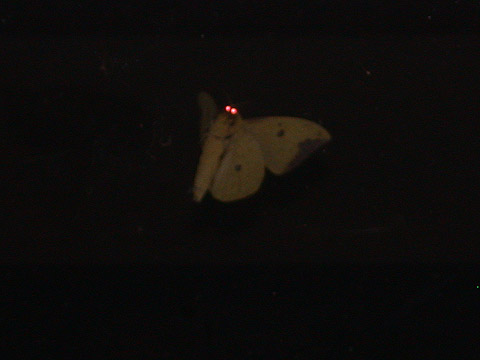 It made quite a racket for half an hour, bumping into the window, then clung to the bricks for awhile, and then disappeared. I wonder how long their lifespans are. 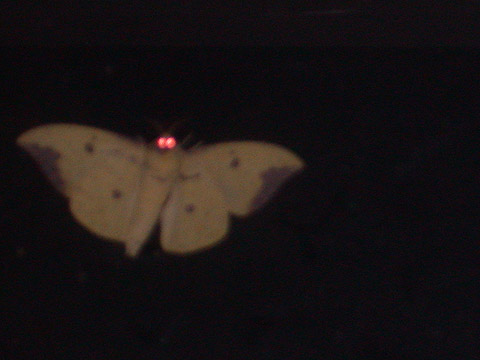 And sorry about the blur but I was shooting through a glass door with light reflecting in the pane (which is why the moth was there in the first place).


It's been a really long day, though not much has happened since I last posted...I did some work, tried to keep my son entertained (he had a friend over for a couple of hours in the afternoon before his violin lesson), made soup, reorganized my bookshelves and put all my Star Trek comic books away in boxes. Am not going to admit that this is so I have room for the Hornblower books when I get them. I have, like, ten packages that have to go to the post office for mailing overseas, and I still have not managed to drag myself there and deal with the lines.

And my house is still a total disaster. And I know I owe a billion comments -- tomorrow, hopefully, sorry I suck.
Posted by littlereview at 10:46 PM No comments: