Today we went to Scotland! We started out in England in Carlisle, the Celtic settlement that became a Roman town, then Saxon, then part of Norman Britain, holding off invaders from the north. Mary Queen of Scots was held in a tower in Carlisle Castle, which was also taken by Bonnie Prince Charlie's troops, as we learned when we toured it (and after seeing the dungeons and imagining the conditions with dozens of people packed down there, I have great admiration for the courage of anyone who chose to be political rather than staying out of it!) There are excellent displays in the Keep of the history of the city and the castle, with great views from the battlements of the rooftops, the cathedral and the remaining cannons at the castle. It's been a strange experience being in so many former Catholic churches and abbeys during what seem to be the last days of this Pope, seeing people praying around the world during the spare moments when we catch the news.

We drove across the Scottish border to Gretna Green, where we ate lunch and took photos in a touristy historic blacksmith's shop that's a popular place for weddings, as England had a higher age of consent and people apparently used to sneak across the border to elope. We also discovered a Cadbury factory outlet there. After the chocolate, we went to several Roman sites along Hadrian's Wall, including the fort at Housesteads where sheep were wandering among the ruins, the Mithraic temple at Carrawburgh sunk in the mud, and the museum and bath house ruins at Chesters which descend a hill toward the beautiful North Tyne River. There are wonderful intact stone carvings of gods and animals at Chesters, while Housesteads sits high on the moors and the sun broke through the mist to create absolutely amazing views.

We drove back to the cottage by way of Raby and Barnard Castles, where we stopped to take pictures (and to pick up groceries for dinner in the town of Barnard Castle, which has a 12th century church, a museum in a French-style chateau and a circular butter market which was once used as a prison). Barnard Castle itself is quite decayed, while Raby Castle is still inhabited by the family that took it over in the 1600s, and there are lovely grounds where we saw several pheasants during our very brief stop. We came back to Dove Cottage relatively early to pack, so we can get a very early start tomorrow (Portsmouth via Nottingham, Stonehenge, Avebury and Salisbury), and the kids watched The Living Daylights in between baths and bedtime. 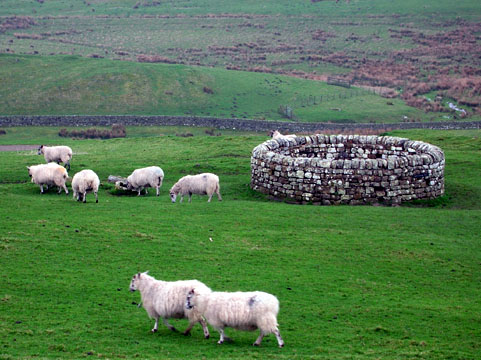 Sheep wander around the Roman ruins at Housestead beneath Hadrian's Wall.
Posted by littlereview at 3:55 PM