On Thursday we took a long ride to the coast -- first to Torquay, a pretty resort area which has a marine life zoo called Living Coasts, then to Plymouth. At Living Coasts we saw three different kinds of penguins (African, Gentoo and Macaroni) as well as puffins, dozens of other seabirds, seals and the cormorants and gulls that live outside the flight cage on nearby rocks. The penguins have free run of the enclosure, so a couple were right on the path next to us, and there are also underwater viewing areas and educational displays in the exhibits connected to the big enclosure with the birds. The kids were very happy to be so close to the animals.

We had lunch in Plymouth a few dozen yards from the Mayflower Steps, or at least the former site of the Mayflower Steps since the originals have apparently had to be rebuilt. There is a monument above them now, and a museum across the street from the water with exhibits on the departure of the Pilgrims and how it affected Britain both before and after, as well as a brief history of Plymouth and Sutton Harbour. We parked in the Barbican area and walked around the citadel up to the lighthouse and statue of Sir Francis Drake on the other side while eating ice cream, since it was spectacularly warm and there were many ships to see in the bay. The sun was almost blindingly bright as we watched a Channel ferry pass a big frigate that was flying a flag I didn't recognize. The English sailors held captive in Iran had been released the day before, so the mood was festive.

We tried to visit Drake's home, Buckland Abbey, but apparently it is closed on Thursdays (no great loss to younger son, since we got to walk right up to the sheep that live there). Then we drove into Dartmoor, where there were wild sheep and horses walking across the roads and fantastic stone formations, some natural, some neolithic. We hiked to a pair of stone rows dating back thousands of years and the Merrivale stone circle, surrounded by sheep that grudgingly marched out of our way when the kids to get close enough to pet them. We didn't actually see much of the forest, which is massive, apart from a couple of stands of evergreens and the animals on the moors. We stopped for dinner at the Highwayman Inn in Shepton Mallet, a pub with excellent fish & chips. Unfortunately I had no internet connection again last night, so no posting was possible till now and these are just a handful of the photos! 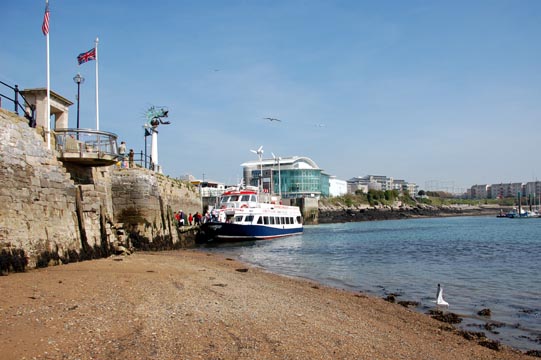 From the beach at Plymouth, the memorial at the Mayflower Steps. 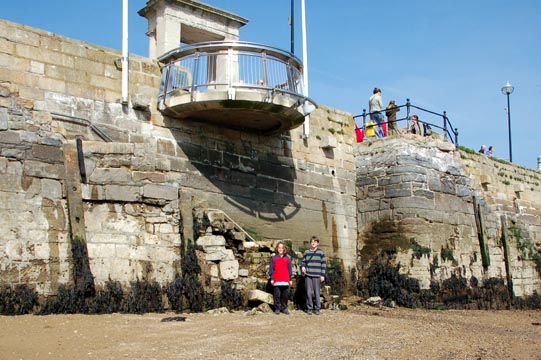 The kids at the bottom of the steps... 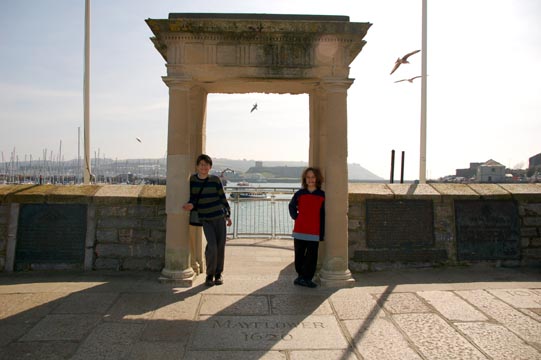 ...and above it at the monument. 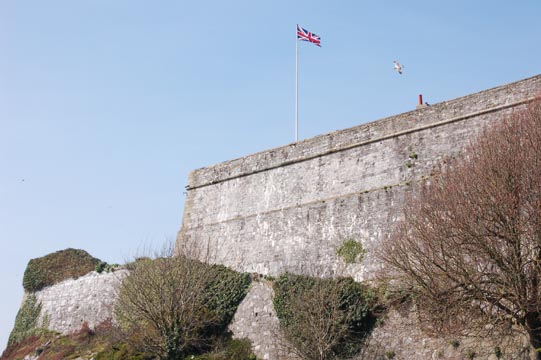 The citadel from Sutton Harbour. 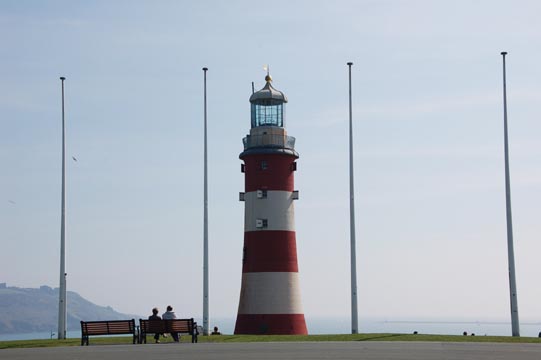 Smeaton's Tower and the Sound beyond. 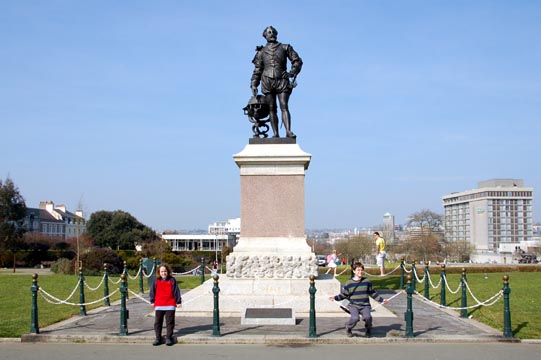 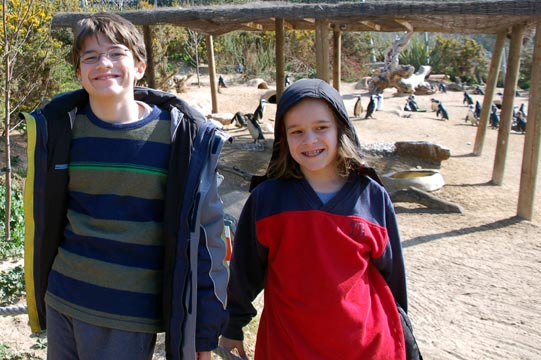 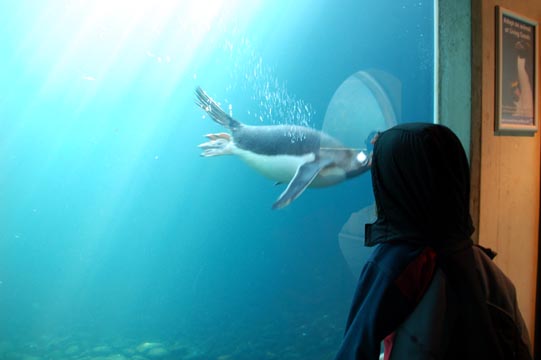 Adam with a swimming Gentoo. 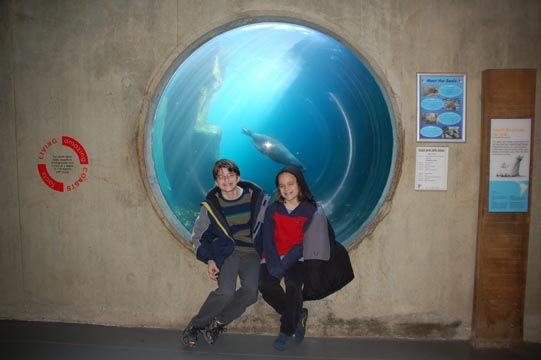 Daniel and Adam with a swimming seal. 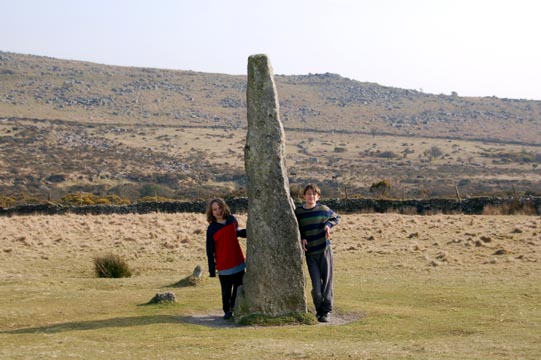 And with one of the Merrivale Stones. 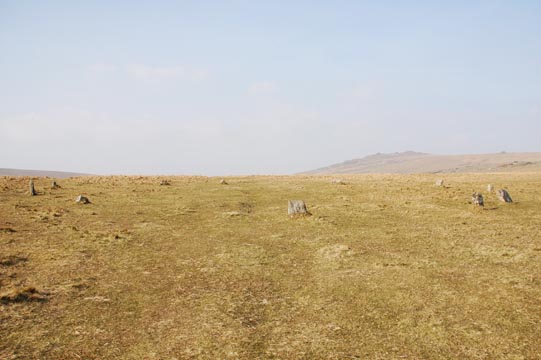 Here are some of the others. 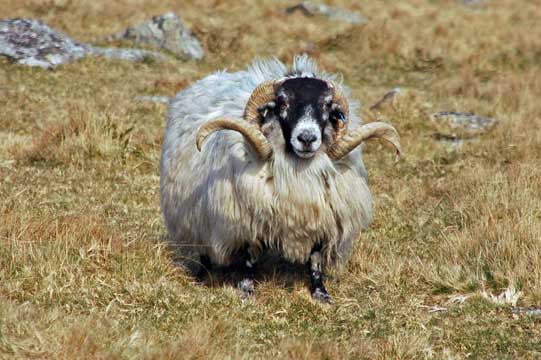 And one of the hundreds of sheep, rams and lambs that wander free all over Dartmoor.
Posted by littlereview at 12:46 AM