In the Barn
By Elise Partridge

One morning, on the mud floor of the barn,
we found a snake glittering in the sun --
ten inches patterned like an argyle sock,
black diamonds on gray. Puffing beside his neck

was a red bubble. No--wait--then we saw
he had a frog clamped in his propped jaw.
The bubble was blood. The frog sat elbows-out,
inscrutable, a drowsy magistrate

hearing a plea. His skin was mottled brown,
dark mud splattered on light. His eyes were open,
gold-rimmed, fixed. He blinked; the eyes looked moist.
His neck bulged; the oversized mouth seemed set.

Desperate-eyed, the cows stared up at us,
clinking linked chains, swaying in their stalls.
The snake glanced sideways, but he couldn't budge,
avid, like we were, edging nearer to watch.

At last the frog looked uncomfortable,
as though trying to be dignified. Willful,
the snake was helpless too, frog jamming his jaw.
We ran when a calf started to bawl.

"A strong tradition in poetry concentrates on the precisely detailed description of the natural world, with emotion seeming to come from the narrated, visual experience itself, rather than from the words that report it," writes Robert Pinsky in Poet's Choice in The Washington Post Book World. "The vividness [of "In the Barn"] arises from an almost chilly attentiveness and almost ordinary language -- 'elbows out' and 'couldn't budge.' Only at the end does it become clear that the mingled fascination and horror come from the viewpoint of children. 'In the Barn' is about the strict, unavoidable grip of matter on life: Living things are stuck in the material world. As the poet says here, 'the snake was helpless too.'"

I spent all day Sunday at a really lovely and surprisingly uplifting funeral and memorial service for my Uncle Paul. I had expected the funeral in particular to be depressing -- the only graveside ceremonies I have ever attended were my grandparents' brief religious services -- but it was at a big sunny cemetery with a large flock of Canada geese arranged like a procession by the road, where some of my aunt's siblings are buried as well as a couple of names of local people I recognized. My cousins chose the readings -- a couple of Psalms, Ecclesiastes 3, a sonnet -- and my parents led the mourner's kaddish because my cousins don't read Hebrew. We all did the traditional three shovels of dirt. It was a nice blend of secular and Jewish, which I imagine is what my uncle would have wanted. They took the entire family to and from the funeral in limousines, so I rode with my husband and older son, my mother, my uncle's 12-year-old and my aunt's niece, whose husband and son were in a different car.

We all had lunch at the senior center where my aunt lives -- my father's brother and his family, my Uncle Paul's two daughters and their families, my aunt's brother and his wife, my aunt's niece and family, plus another local cousin. Then we went home for a while to let older son rest. There was a 4 p.m. memorial service that over 100 people attended -- my sister flew in with her oldest daughter, more local cousins arrived, and a great many local friends came including my mother's good friends and my aunt's longtime neighbors from before she and my uncle retired, plus people from the senior center. It was really more of a celebration than a memorial, with my cousins, parents, uncle and various other relatives remembering my uncle -- there were letters from people he served with in Europe and people who lived too far away to travel. There was a reception afterward where I talked to my cousins who were in from various colleges and some of my parents' friends. No one would have enjoyed it more than my great uncle himself. I had the same feeling I had at my grandmother's funeral, namely that they should have done the funeral two years earlier while the deceased was there to appreciate it. 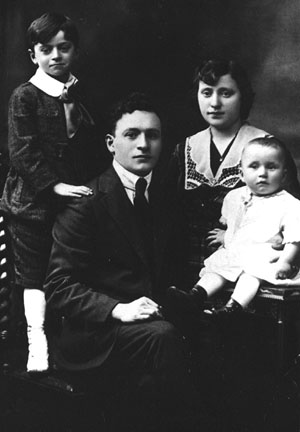 The adults in this photo are my great-grandparents. The older boy is my father's father. The baby is my Uncle Paul.

I have the Grammys on but am pretty fried -- I see the Foo Fighters just won best rock album and Amy Winehouse (inexplicably, to me) won best new artist and song of the year. And Obama beat Clinton...well, Barack beat Bill in the spoken word album category (at least he also beat Jimmy Carter). All my younger cousins are voting for him, while most of the older ones are voting for Hillary. Interesting that the national schism among the Democrats is demographically reflected in my own family. I can't think about the primary till tomorrow.
Posted by littlereview at 3:08 AM