Obscurity and Regret
By C.D. Wright

The hand without the glove screws down the lid
on the jar of caterpillars, but the apple trees
are already infested. The sun mottles
the ground. The leaves are half-dead.
A shoe stomps the larvae streaming
onto the lawn as if putting out a cigarette on a rug.
It was a stupid idea. It was a stupid thing to say
the thought belonging to the body says to its source
stomping on the bright-green grass as it spills its sweet guts.

Dementordelta and her friend Lin picked me up this morning for a lovely Cinco de Mayo. We drove to Arundel Mills Mall to meet another friend of theirs for lunch...Mexican food, in honor of the date (I had grilled chicken tacos and black beans which I could not finish since the platter was so big). Then we went to Geppi's Entertainment Museum in Baltimore, right next door to Camden Yards, which we walked around from the parking lot, first time I've ever seen the stadium without game day crowds. We wanted to get there this month while the special exhibit on Barbie's 50th birthday was still on display. This is my favorite display case of Barbies in the exhibit because I own more than half of the dolls on display here. In addition to displays like this collection of Dolls of the World... ...there's a table of Barbies, Kens, and their clothes to play with! (And posters about the history of Barbie and her controversial position among female icons; anyone who wants to read my take on this can look up my Barbie Tarot.) Dementordelta was very pleased to find Snape on display with other Tonner Harry Potter dolls. 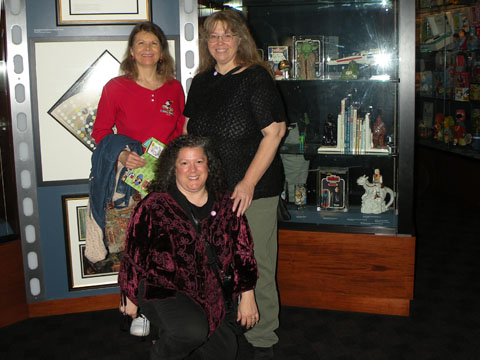 And she was pleased by all the Darth Vader items, too. Here we are with Lin in the room with the main Star Wars collection. 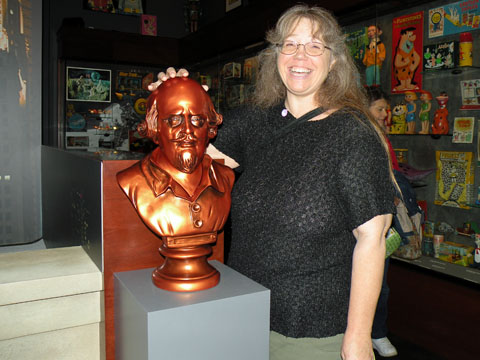 And here is Dementordelta on her way into Batman's lair. She was very impressed by the size of Batman's package. Er, I meant statue. Batman is a popular figure all over the museum. Here is a cardboard standee from the movies with the Bromo-Seltzer clock tower out the window.

After Dementordelta dropped me off at home, I watched the Kline-Pfeiffer-Friel-Bale-Flockhart-Strathairn-et al A Midsummer Night's Dream with younger son and his friend since they're reading the play in English -- everyone in the household enjoyed it a lot, though son's friend's was mostly interested in all the sexual innuendo their English teachers apparently didn't explain, which the film makes more obvious. Then we watched The Tudors On Demand, not one of my favorite episodes -- I'm never happy when there are no major female characters involved in the proceedings -- but reasonably diverting as always. And now Jon Stewart is explaining the New Republicans to me, whom I can't tell from the Old Republicans.
Posted by littlereview at 12:35 AM