Poem for Sunday and Snow Everywhere

The Blizzard of 2010 dumped more than two feet of snow overnight and all day Saturday, which did not break the 1922 storm record but that is fine with me considering that lots of people died in that storm from roof collapses. We lost power briefly during the night, resulting in our sleeping late since we couldn't tell what time it was, but we were lucky -- my parents and several local friends had no power for hours. Mostly we had a quiet day interspersed with snowy kids coming in and out -- we recruited them for a lot of the shoveling, particularly dumping the snow off the deck before it could bring down the deck. The neighborhood was quite quiet and peaceful considering that the plow got stuck in the middle of the night, so they sent a smaller Bobcat-type thing to scoop up piles of snow and dump it in bigger piles off the middle of the street, which did not make it possible to move vehicles any distance, as a couple of our neighbors discovered.

So we had a quiet, relaxing day, mostly reading and catching up on computer stuff -- I uploaded a boatload of stuff to Google Docs, only to have it alert me to a previously unmentioned maximum number of files, and now it not only won't let me delete some so I can add others, it won't even show me the largest of my folders, arrgh. In the afternoon when most of us were sick of basketball, Paul -- who made Ethoipian food for dinner, mmmm -- suggested that we put on Harry Potter and the Chamber of Secrets, and although it was never my favorite, I never say no to Lucius Malfoy with his hair tied back. The kids wanted to beat some Chocobo level in the evening, so we listened to classical music and had cats snuggled in various spots. The real question is whether we will be able to get out of the parking lot on Sunday to go to my oldest friend's Super Bowl party, and even if we can get out, whether her street will be plowed sufficiently for us to park there. 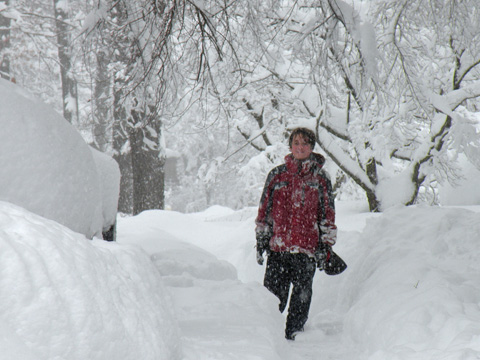 The view from my front porch when I got up this morning -- that's our neighbor's tree collapsed between the doorway and the vehicles. The berries on the neighbor's tree were quite surrounded by snow. A first photo out the back from the kitchen overlooking the deck. This was about 9:30 a.m., so several more inches of snow fell before evening, though we had brushed off the railing before it finished. The neighborhood was blanketed in white. (The splotches are snowflakes that fell on my lens while I was taking the photo.) Eventually people emerged from their houses and tried to clear off their cars a bit. Help arrived in this form during the afternoon, while snow was still falling. By dusk the trees were still nicely snow-laden and we had little icicles hanging over the deck.
Posted by littlereview at 12:02 AM