Poem for Thursday, the Bay and the Baysox

Returning To My Cottage
By Wang Wei
Translated by David Young

A bell in the distance
the sound floats
down the valley

one by one
woodcutters and fishermen
stop work, start home

the mountains move off
into darkness

alone, I turn home
as great clouds beckon
from the horizon

in the marsh to the east
new growth
vibrates with color

it's sad
to walk in the house
and shut the door.

Paul took the afternoon off, since it was supposed to be a nice day, he has phone conferences tomorrow, and the kids start school next week, so we could go to eastern Maryland to the beach and a baseball game! We had a quick early lunch and drove to Flag Ponds State Park, where unlike previous years it was neither outrageously hot nor surprisingly crowded -- it was overcast and barely in the 80s, and we had the beach practically to ourselves. It would have been a perfect couple of hours except Adam got stung by a jellyfish not long after we arrived, which ruined his enthusiasm for wading half a mile offshore (the sand stays so level once one is in up to one's waist that one can walk a long, long way out), and Daniel was bothered by the tiny sand flies on the beach when he'd had enough of floating. Still, it was very pretty and quiet, we saw lots of gulls and leaping fish plus a couple of crabs, and the walk to and from the beach through the woods is always lovely.

We drove for about 45 minutes to Prince George's Stadium, home of the Bowie Baysox. PG County's schools opened for the fall this week -- a week earlier than my county's -- which I gather really cuts into baseball revenues because they had $1 tickets for this game against the Akron Aeros. The game did not go well for the Baysox, who gave up several runs in the first inning and ended up losing 8-1, though we didn't stay till the end of the game since it's nearly an hour home from the stadium; still, what's fun about minor league baseball is that the crowd is low-key and there's lots of goofy fun audience participation stuff, so it feels much more like a local gathering place than the big-money, big-mob major league ballparks. I'm a bit sleepy from all the sun and fresh air, but here are some photos from across Maryland: 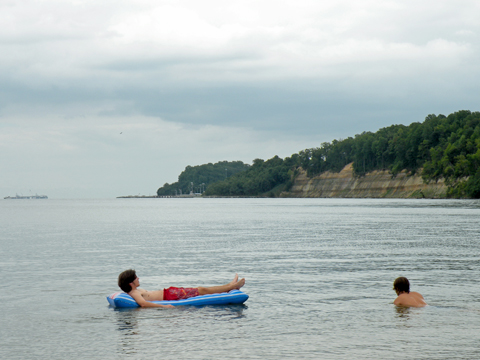 My kids enjoying the warm Chesapeake Bay water at Flag Ponds State Park with Calvert Cliffs in the background. Unfortunately, Adam encountered a much larger one of these... ...and ended up with a very painful arm for the rest of the afternoon. There were no such menaces at the Bowie Baysox game... ...well, at least not unless the team's mascot counts. His name is Louie. Don't ask me what species he's supposed to be. In addition to baseball, we got to meet Mrs. Maryland, who threw out one of the ceremonial first pitches -- her real name is Allison Zmuda and she teaches eighth grade English, so I approve. One of the between-inning events involved kids racing on inflatable horses. (When Adam was about five, he and I were chosen for one of these events at a Frederick Keys game -- we raced on tricycles and won a bike helmet.) By the time it was dark, the stadium wasn't very crowded, as you can see -- it's a school night there.
Posted by littlereview at 12:01 AM