I hardly slept Sunday night, so Monday morning I decided it was time to visit the doctor, make sure my poison ivy really was poison ivy and not some infection, and get something stronger than over-the-counter hydrocortisone cream and calamine lotion to put on it. So after lunch I went to see my dermatologist. And now I must rant about health care, though not about the health care legislation, the Supreme Court decision, or anything like that. Compared to most people in the U.S., I have very good insurance, one of AETNA's PPOs, which we get through my husband's employer. I get to choose my doctors and apart from office co-pays, a great deal is covered without any deductible. I have dental and vision insurance.

I should feel quite spoiled, but today I realized I need a new dermatologist. This is not because I am unhappy with the quality of the health care I receive from my dermatologist: quite the contrary, he's removed every mole on my body that ever looked suspicious, he's always been quick to call with test results, and on days like today when I called for an appointment in the morning with a specific concern, I've always been able to see him within 24 hours.

It's because this is the second time -- and he is, in fact, my second doctor, along with my former GP, to do so -- he gave me a prescription that I was positive was chosen not because it was the best medication for my condition, but because he was getting a kickback from the pharmaceutical company. In today's case, I needed a hydrocortisone cream that's a higher concentration than is available over the counter. I should have known that something was up when the doctor handed me a coupon. I figured he was saving me $20 on an $80 medication that my insurance would cover at least in part. I didn't realize he was saving me $50 on a $500 medication. Which has an older version, still on the market, for which there is a generic drug that's much less expensive, but of course that's not the one he prescribed.

Apparently pharmacists are not allowed to sell you the non-emollient version of a skin cream when the emollient version is what the doctor prescribed, even if there is only one single ingredient differing between the affordable and the insanely expensive, not-covered-by-insurance poison ivy treatment. CVS is often screwy in general -- sending text messages saying that prescriptions are ready when they're not, claiming not to have received faxes from the doctor without bothering to mention that their fax machine is broken so the doctor needs to call it in -- but so far as I can tell, they are legally in the right here.

I like my GP, who is always quick to call with test results and is frank about the advantages and disadvantages of medicines, procedures, nutrition changes, etc., and I like my ophthalmologist, who answers his own calls on weekends while he's at golf tournaments. But I'm also utterly sick of watching how personal and corporate greed interferes with my medical treatment.

Ahem. Anyway, to chill out, I watched both parts of Voyager's "Future's End" with Daniel -- now that I neither really love nor really hate the show, I can enjoy it with a kind of nostalgia. The woods were full of awesome spiderwebs on the rotting fallen trees and the bunnies were out enjoying the damp grass. After dinner and Adam's art class, we watched Sharpe's Company. Here are some more dresses from Prêt-à-Papier in Hillwood's Adirondack Building: 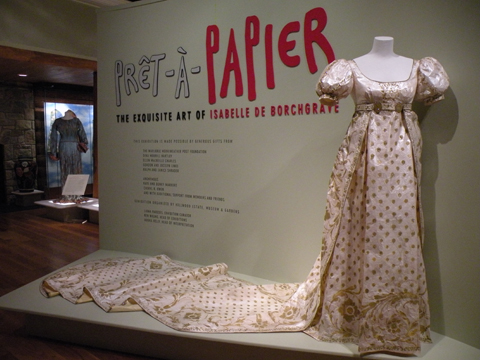 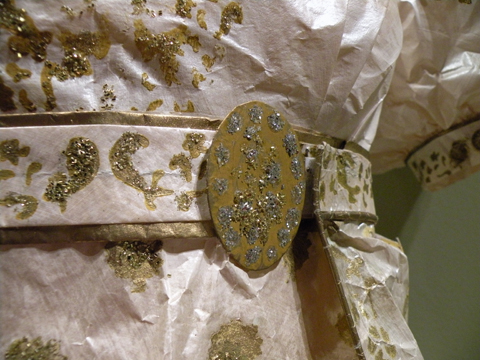 ...Isabelle de Borchgrave used cardboard and glitter for embellishment over paper painted to look like satin. 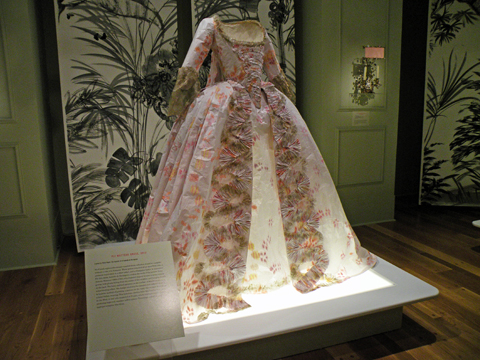 The Pli Watteau dress, created for this exhibition, evokes the work of painter Jean-Antoine Watteau, who painted women in gowns with similar pleats falling from the neckline. 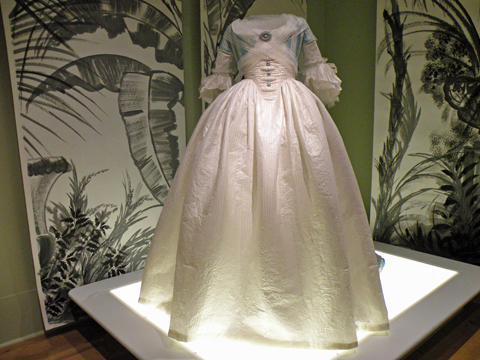 The Vaporeuse Dress is based on the dress in Rose-Adelaide Ducreux's Self-Portrait with a Harp, a robe a l'anglaise lacking the boned bodice and hooped skirt of the generation before. 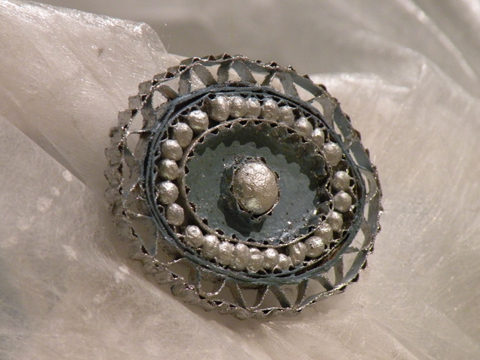 Here you can see the use of corrugated cardboard and crumpled paper in the embellishments. 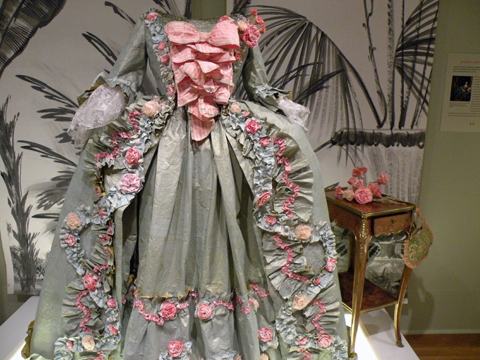 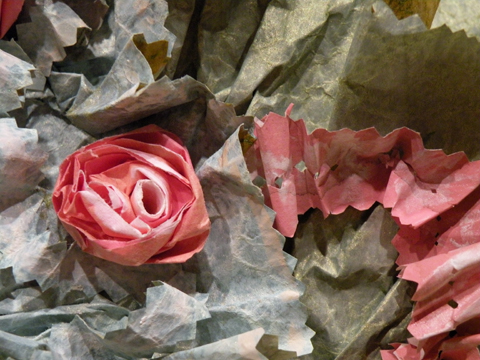 ...has more than 100 paper roses stitched to the paper-as-silk-taffeta... 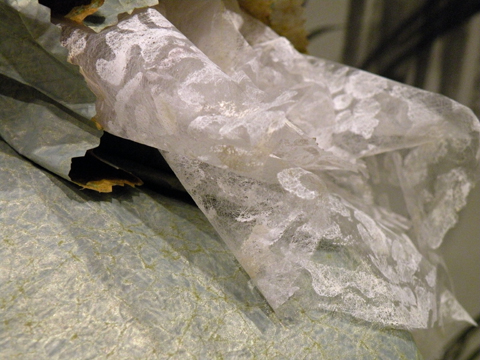 ...and rococo "lace" sleeves made by painting designs onto paper mesh.
Posted by littlereview at 12:01 AM