I'm in Hanover with my husband's family, where there is a little tree and lots of Scandinavian decorations -- they have a straw goat, an orange painted horse and several tomtens on their shelves. We had a very lovely drive up here looking at Gettysburg memorials out the window and listening to the Redskins defeating the Giants -- who would have guessed from how they started their season that they would have a shot at winning their division? My mother-in-law decided when she retired that she was sick of spending all day before Christmas Eve cooking, so instead of having anything traditional, we had Red Lobster, which was excellent (younger son and I split the coconut shrimp and grilled salmon). There are also many kinds of cookies and mints and chocolate. 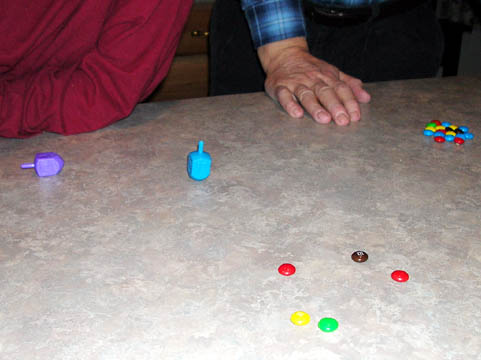 How we spent the night before Christmas...playing dreidel. (I believe my father-in-law won, though that may be because my younger son ate half his pieces before counting.)

On Sunday my parents are driving up, and we are having a mixture of Ashkenazi Jewish and Swedish holiday foods (latkes, meatballs, korv, sufganiot, etc.) Pickled herring crosses the cultural divide. Too bad it's just about the only fish I don't like! Hope everyone is having a wonderful holiday, whatever you're celebrating -- happy slash season (Christmas/Chanukah/Midwinter/Kwanzaa/Yule), or, as my kids have been saying, Happy Christmakwanzukule!
Posted by littlereview at 12:14 AM