It's like falling from an airplane
before the masked face of a creator
who's dressed in a scrub suit
and latex gloves.
Now they are bringing, bedded in melting ice,
the new heart,
like some trophy
from the Eightieth Olympiad of Calamities.
Atrium is sewn to atrium,
aorta to aorta,
three hours of eternity
coming and going...

From Poet's Choice in Sunday's Washington Post Book World. "Late Czech poet and immunologist Miroslav Holub mined greater treasure from the sciences than any other poet I know," writes Mary Karr. "Holub swings open the operating-theater door in 'Heart Transplant' and reveals technology's new beauty...a few recent poets have peppered their work with technical gobbledy-gook, but only Holub has made lovely -- at a cellular level -- how both hemophilia and interferon function.

Saturday was another long travel day broken up by stops at scenic locations in Wisconsin, Minnesota and South Dakota, where we are staying tonight near the only Corn Palace in the world. *g* Some of the highlights I couldn't photograph included herons in standing water in flooded fields, red-winged blackbirds perched on fence posts, huge wind farms with spinning propellers visible for miles and dozens of signs alerting us to our impending arrival at Wall Drug along with all the wonderful things we can do there. Here are some of the highlights I could photograph: 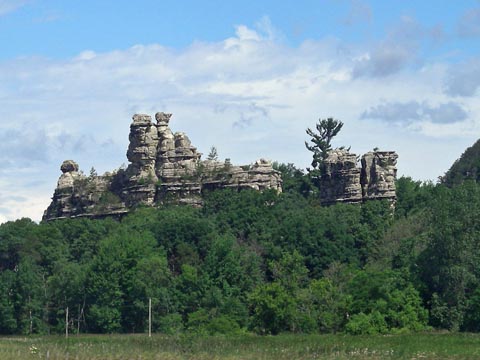 Rock formations high above the onetime path of the river near the Wisconsin Dells. 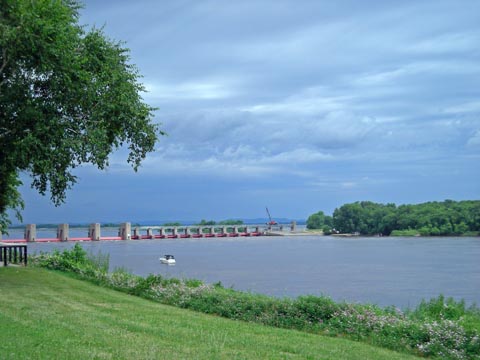 Looking back at Wisconsin from the banks of the Mississippi River near Winona, Minnesota. 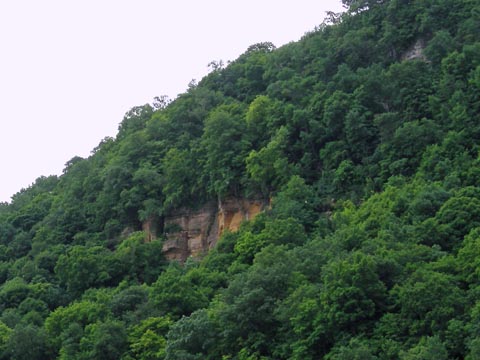 Just a few hundred feet away, the bluffs rise far above the highway, revealing sheer rock where not covered by trees. 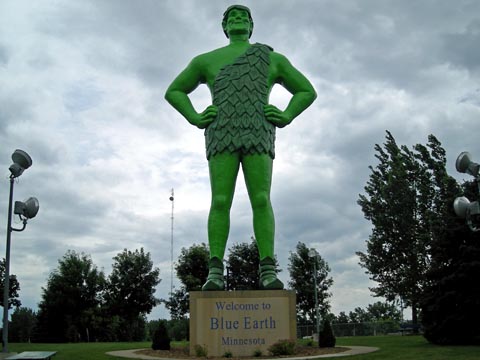 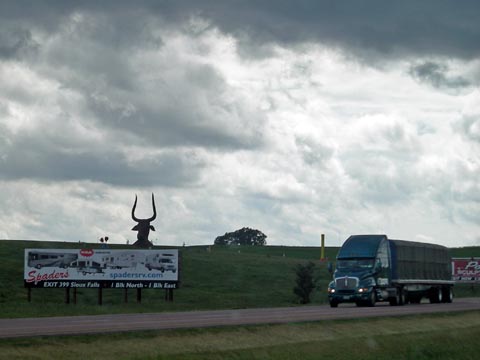 A giant steer's head sculpture on a farm in South Dakota. 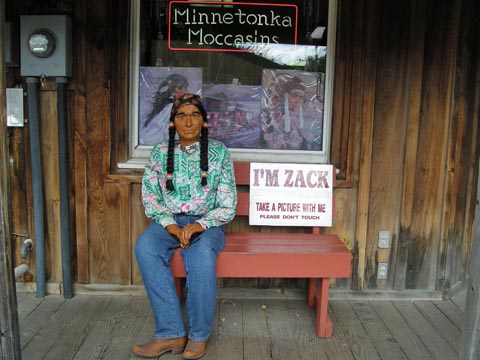 I'm afraid that I cannot label Mitchell, South Dakota's gift shops among the more tasteful we've come across, though they do have Black Hills gold...as well as "Homeland Security" t-shirts showing Dakotans with their guns and polyester Indian headdresses. 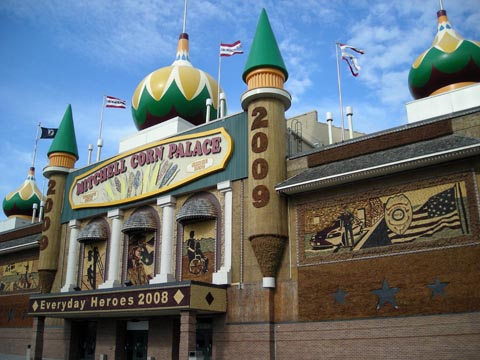 Here is that height of tastefulness, the Corn Palace... 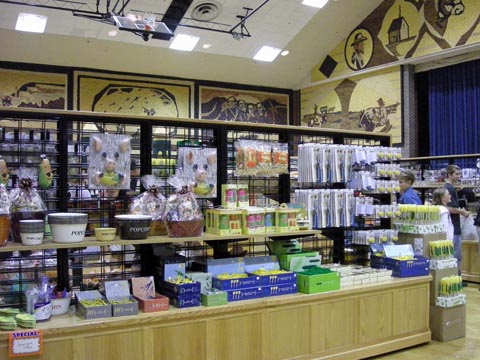 ...within which one can purchase every corn-related product and condiment known, except biofuels!

Thanks to the wonders of wi-fi, we were able to download and watch "The Stolen Earth" in between dinner and a quick trip to K-Mart for drinks and mustard. I am too distracted for anything resembling analysis so here is some gratuitous out-of-order squee. Spoilers: I was so pleased that Donna figured out the connection among the missing planets -- not just recent ones but all the ones she's ever heard about from the Doctor or anyone else. That impressed me far more than the Doctor speaking Judoon. I squealed every time someone else popped up -- Jack, Gwen and Ianto, Sarah Jane, Luke and Mr. Smith (whom Sarah Jane tells to dispense with the fanfare), Martha in New York...and then when Harriet Jones shows up and makes everyone work together! And Grandpa fighting the Daleks with a paint gun! And the Doctor (again using a tip from Donna) following the alien bees!

I had told my friend in London that I might forgive anything and everything if the episode gave me some hope for future Doctor/Jack/Sarah Jane fic, and it did not disappoint. My favorite scene all season may be Jack flirting with Sarah Jane, who tells him she's been trying to keep Luke away from his big guns, which of course doesn't faze Jack in the slightest and Harriet has to tell them this isn't the time. Whereas the Doctor tells Donna that it will NEVER be the time...figures he wants to be everyone's center of attention on top of his God complex. My reaction to Rose being back and griping that she was there before Martha was less amused than eye-rolling disgust; at one time I would have found it amusing, but if I have to watch a bitch-fight over the Great and Powerful Doctor in the wake of saving the world, I will puke. If the most loyal companion is indeed going to die, I hope it means Rose rather than Martha at this point, though I suspect given the cues we've had all season that it's actually Donna. I admit to snickering during the Rose-and-Doctor-race-toward-each-other-like-Maria-and-Tony-in-West Side Story sequence; I was expecting the shot, and that it would hit him rather than her. I wish I'd actually cared.

Because I'm afraid my biggest regret is the same one that I've had all season, namely that I'm slowly discovering that Doctor Who is often my least favorite character on Doctor Who; I was so thrilled to see Harriet, Torchwood, Sarah Jane and Martha all working together and would have been utterly delighted to see Rose as well, except that Rose this season is even worse than Martha last season preaching the One True Gospel of the Doctor, refusing to sanction the idea that there might possibly be some other saviour, perhaps even one born of her own planet. No wonder Baltar's Messiah fantasies aren't bothering me on BSG so much these days!

Someone who watched previous Doctors will have to fill me in at some point on Davros, the Medusa Cascade and all the things that have clearly been important at some point in the past. We brought most of the Tom Baker series with us but haven't watched any yet. My kids adore the Daleks but I sort of feel like we're seeing stories that have been told before...oh, so now the Time War and the destruction of Gallifrey aren't time-locked, immutable events? Why am I afraid we could have piles more Time Lords around to interfere with humans in upcoming seasons? Give me the good old human connections between everyone else without the Doctor being the center of the world. Or maybe what I mean is, give me Torchwood and The Sarah Jane Adventures and more stories about Donna, but i'm not sure how sorry I'll be to see this Doctor's season end.

My mom says my uncle is doing much better, though he still has pneumonia, so that is a relief! Sunday night we will be at Devil's Tower and I have no idea if I will have an internet connection, so this may be all besides Twitters for the weekend!
Posted by littlereview at 3:08 AM