Five Houses Down
By Christian Wiman

I loved his ten demented chickens
and the hell-eyed dog, the mailbox
shaped like a huge green gun.
I loved the eyesore opulence
of his five partial cars, the wonder-cluttered porch
with its oilspill plumage, tools
cauled in oil, the dark
clockwork of disassembled engines
christened Sweet Baby and benedicted Old Bitch;
and down the steps into the yard the explosion
of mismatched parts and black scraps
amid which, like a bad sapper cloaked
in luck, he would look up stunned,
patting the gut that slopped out of his undershirt
and saying, Son,
you lookin' to make some scratch?
All afternoon we'd pile the flatbed high
with stacks of Exxon floormats
mysteriously stencilled with his name,
rain-rotted sheetrock or miles
of misfitted pipes, coil after coil
of rusted fencewire that stained for days
every crease of me, rollicking it all
to the dump where, while he called
every ragman and ravened junkdog by name,
he catpicked the avalanche of trash
and fished some always fixable thing
up from the depths. Something
about his endless aimless work
was not work, my father said.
Somehow his barklike earthquake curses
were not curses, for he could goddam
a slipped wrench and shitfuck a stuck latch,
but one bad word from me
made his whole being
twang like a nail mis-struck. Aint no call for that,
son, no call at all. Slipknot, whatknot, knot
from which no man escapes—
prestoed back to plain old rope;
whipsnake, blacksnake, deep in the wormdirt
worms like the clutch of mud:
I wanted to live forever
five houses down
in the womanless rooms a woman
sometimes seemed to move through, leaving him
twisting a hand-stitched dishtowel
or idly wiping the volcanic dust.
It seemed like heaven to me:
beans and weenies from paper plates,
black-fingered tinkerings on the back stoop
as the sun set, on an upturned fruitcrate
a little jamjar of rye like ancient light,
from which, once, I took a single, secret sip,
my eyes tearing and my throat on fire.

I had a lovely day with Dementordelta, Gblvr, and Hufflepants. The former got here first and we watched some Merlin and I dragged her to the bank with me. Then we met the others for lunch at the mall food court -- easiest place with all of us plus my kids. And after a stop in Hot Topic to check out the new Harry Potter merchandise (which seems sadly outnumbered by the new Twilight merchandise), we came back to my house, sent the kids to the pool, and watched Nobel Son (because some of us wanted to watch Alan Rickman and some of us wanted to watch Eliza Dushku).

The opening sequence was so graphically violent that I wasn't sure I'd make it through the rest of the movie, but the rest of it was largely quite entertaining, though this is very black comedy -- terrific cast (Mary Steenburgen, Danny DeVito, Bill Pullman), unpredictable script, most amusing car chase sequence I've ever seen (in a mall via remote control). Parts of it are actually quite sad, though Alan is hilarious as a man completely infatuated with himself. When the movie ended, I showed them the business card scene from Arrested Development and we had cookies. Here are some photos of Cisne Branco in Baltimore yesterday: 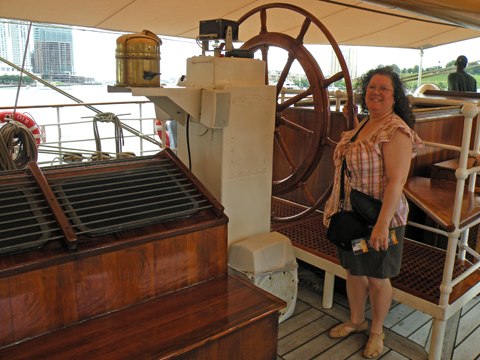 Dementordelta brought me a DVD about Faberge eggs with an emphasis on the ones we saw at the VMFA in Richmond, so we watched that in the evening and did chores in preparation to travel in two days when Hufflepants will be watching our cats. Tomorrow means lots of laundry!
Posted by littlereview at 12:42 AM