At Lake Scugog
By Troy Jollimore

Where what I see comes to rest,
at the edge of the lake,
against what I think I see

and, up on the bank, who I am
maintains an uneasy truce
with who I fear I am,

is just wide enough to contain
the remains that remain
of what I assumed I knew.

Out in the canoe, the person I thought you were
gingerly trades spots
with the person you are

When I promised I will always give you
what I want you to want,
you heard, or desired to hear,

something else. As, over and in the lake,
the cormorant and its image
traced paths through the sky.

In addition to being the 40th anniversary of the moon landing, Monday was Adam's 13th birthday. We celebrated by having lunch at Bagel City (the boys split tuna and nova lox spread bagels, plus a black and white cookie), then coming home so Adam could go to the pool and Daniel could get ready for his first day of health class -- mandated by the county for graduation, taken in the summer so he doesn't have to stop performing in the school choir, which is a course that must be taken at school.

Both my parents stopped by to say happy birthday. Paul made poached salmon for dinner for Adam, so I was the third-party beneficiary of his birthday -- okay, technically I suppose I deserve some credit for his birthday. After we retrieved Daniel, we had ice cream sundaes, plus the blackberries we picked over the weekend with Cool Whip, while we watched the History Channel's specials on the moon launch...I prefer the actual footage to the reenactments, but it's all good. 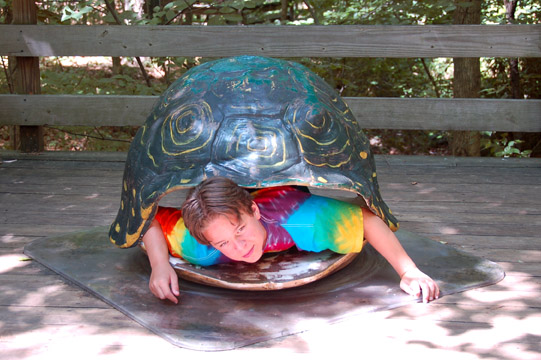 Adam in one of the turtle shells at the Maryland Zoo on Saturday. Baby elephant Samson and his mother Felix working with keepers at the zoo. The leopard acted like a big cat, growling and rubbing his face against the fence until he was fed. Mother and baby sitatunga, a species of African antelope, hiding in the tall grass. 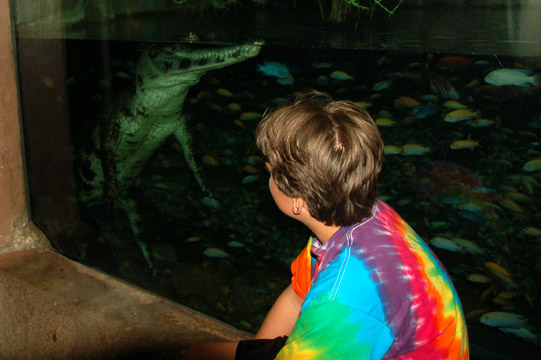 Adam with one of the crocodiles that live in the same building as the chimpanzees. The youngest chimpanzee, out enjoying the lovely weather last weekend. The river otter in the Maryland region of the zoo diving underwater. Giraffes stretching their necks to try to grab leaves out of the trees that grow just outside their enclosure.

Pushing Daisies season two comes out on DVD on Tuesday! And Sean Bean will apparently be starring in the adaptations of those George R.R. Martin novels I've never read but I guess I will be watching!
Posted by littlereview at 12:47 AM