The Solipsist
By Troy Jollimore

Don't be misled:
that sea-song you hear
when the shell's at your ear?
It's all in your head.
That primordial tide --
the slurp and salt-slosh
of the brain's briny wash --
is on the inside.
Truth be told, the whole place,
everything that the eye
can take in, to the sky
and beyond into space, lives inside of your skull.
When you set your sad head
down on Procrustes' bed,
you lay down the whole universe. You recline
on the pillow: the cosmos
grows dim. The soft ghost
in the squishy machine, which the world is, retires.
Someday it will expire.
Then all will go silent
and dark. For the moment, however, the black-
ness is just temporary.
The planet you carry
will shortly swing back from the far nether regions.
And life will continue --
but only within you.
Which raises a question that comes up again and again,
as to why
God would make ear and eye
to face outward, not in?

"Perhaps it was inevitable that I would eventually write a poem about a solipsist: a person who thinks that he is the only person in existence and that everything else, the entire world, is just his experience, with no independent reality of its own," writes Jollimore in Poet's Choice in The Washington Post. "I make my living teaching philosophy, but I'm always wary of putting philosophy explicitly into my poems," he adds. "I let myself try it -- partly because solipsism is not a position I hold. In fact, the way the poem is supposed to work is that by the time you get to the end, you realize how utterly absurd and ridiculous the position is."

Days do not get much better than my Saturday. We left the house early to pick up the Paul McCartney tickets in Rockville, dropped Daniel off for a robotics meeting in Silver Spring, then drove practically to the Pennsylvania border to meet Paul's parents at Union Mills, which was having its 39th Annual Old-Fashioned Corn Roast Festival, plus the 8th Virginia Infantry Regiment was camping on the grounds. Union Mills was the Shriver family homestead for many generations and General J.E.B. Stuart's cavalry camped there, taking the family's horses, though one son (a slaveowner) sided with the Union, and another son (not a slaveowner) sided with the Confederacy. The mill still produces flour, plus there's a working blacksmith shop, tannery, and various other historic buildings. At the corn roast, one pays $12 for the fundraiser and gets a quarter chicken, drink, roll, fruit and veggies, plus all the fresh-roasted corn that one can eat (which in Adam's case was five and a half ears). There was live music, mostly jazz, though at one point the band started playing "Maryland, My Maryland" and the people next to us pointed out that it was because former governor Bob Ehrlich had just arrived.

We walked around the grounds and visited the blacksmith and woodcarver, though we didn't take the longer tour of the mill and homestead, before leaving late in the afternoon -- we had thought about stopping by the Baltimore Ravens' scrimmage in nearby Westminster, but we were afraid we'd run late if we did that. It started to rain when we went to pick up Daniel and we got nervous, but by the time we'd eaten dinner and gone into FedEx Field, there was a huge rainbow covering all of the parking lot and Landover beyond. I have already posted at length about Paul McCartney -- see previous entry -- so I will simply reiterate that it was the most amazing concert experience of my life, and mention that getting out of the parking lots at FedEx Field really is as horrible as you may have heard...we weren't home till after 1 a.m., though the concert was over before midnight. So we were still pretty fried on Sunday, and our major activity -- since more rain was forecast -- was going to see Harry Potter and the Half-Blood Prince again, with my reaction being very much the way it was the first time (liked the movie better than the book, particularly Ginny, Narcissa, and Tonks, even though there are many plot points that really must be filled in later). 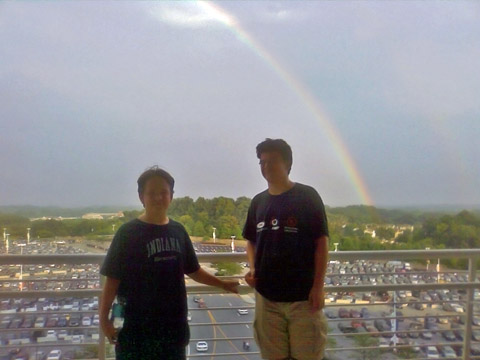 My kids with the rainbow visible for more than half an hour over the parking lot. The stadium was only half-full when Thievery Corporation opened.

From where we were sitting, it was much easier to see Sir Paul on the big screens than on stage, at least without binoculars. And all my photos are crap because I took them with my phone, having obeyed stadium rules that no cameras were permitted inside. Once I saw the number of flashbulbs going off and realized that a lot of people had not obeyed, I figured I could snap a couple. There were many big flashy strobe light effects on the stage, which I could have lived without, but the kids loved them, particularly the full fireworks display during "Live and Let Die." Here you can see how smoky the air was after the fireworks. And now I am done posting self-indulgent terrible photos!

Belated TheFridayFive: Cleanliness
1. How often do you clean your home? My entire home from basement to ceilings? Hahaha, hasn't happened yet.
2. What domestic chore do you hate? Dusting. I'd rather do toilets every time.
3. What domestic chore do you enjoy? Folding laundry.
4. Do you own a washing machine or go to the laundrette? Own.
5. Do you iron underpants and/or bed sheets? Not one single time in my life have I ironed either.

Belated Fannish5: What are the five most heartbreaking things that have ever happened in your fandom(s)?
1. Voyager's writers opted for T&A over better stories, a stronger captain and a more ensemble-oriented show.
2. Pushing Daisies got cancelled without a proper resolution.
3. VR5 got cancelled without an ending.
4. The West Wing's John Spencer died, so Leo had to die too.
5. Deep Space Nine's writers decided to kill off or scatter a huge percentage of the characters in the very last episode after letting them survive most of the Dominion War.

Watched Due South's "Victoria's Secret." I know this is a fan favorite, but there is so much misogyny in this episode, both overt and stuff that falls under the macho code, that I am tempted to write about all the ways it bothers me and how often I find this in shows often celebrated for their subtle homoerotic content. But I think I am instead just going to try to forget about it, because I really love this show when there aren't women involved in any sort of romantic scenario...which is a really sad commentary on women on the series, but there you have it.
Posted by littlereview at 12:37 AM