but also under growth
where we sink
down in bogs
filled
with resolve
nothing we utter
is true
still
we groan
gape
and push a new
thing out.

We spent Sunday downtown at the Newseum and the National Gallery of Art, both of which have temporary exhibits that we wanted to see before they closed. The Newseum has half-price admission this month for anyone who mentions WTOP while buying tickets, and we wanted to see Woodstock at 40, celebrated both with a photo/souvenir display and a montage in the Robert H. and Clarice Smith Big Screen Theater with music and interviews, plus G-Men and Journalists, a brief history of the FBI and the news with such artifacts as the electric chair where Lindbergh's son's kidnapper died and Patty Hearst's gun.

There is always much more to do at the Newseum than can be done in a single visit. We went to the documentary retrospective on Walter Cronkite narrated by Nick Clooney, the sports journalism theater, the News History gallery, the 4D film, the map of freedom of the press, the 9/11 gallery, and the First Amendment exhibit. We also had late afternoon ice cream, and watched on the giant screen spanning several floors above the lobby while Woodstock organizer Michael Lang talked about organizing the concert and why it had the impact that it did. A collection of memorabilia from the Newseum's commemorative Woodstock exhibit... ...which is clearly still relevant all over the world, as this image came not from that exhibit, but from the front page of an Austrian newspaper in the Newseum's daily display of front pages from around the world. An Oprah Winfrey quote and the "Bong Hits 4 Jesus" banner that triggered the Morse v. Frederick suit in which the Supreme Court ruled that the First Amendment does not protect from expulsion students who promote drug use at school events. From a photographic display on Barack Obama, a picture of the president weeping as he remembered his recently deceased grandmother. 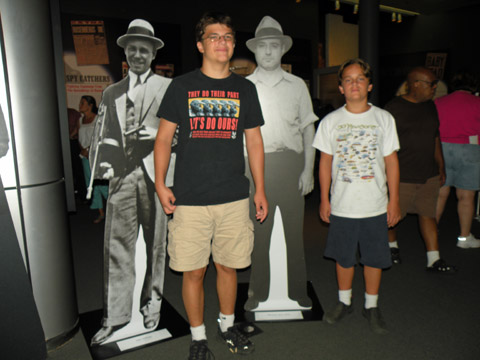 My kids in the G-Men and Journalists exhibit next to cutouts of mobsters. From the same exhibit, an unhappy reminder of an event that disrupted my own children's lives -- the snipers who terrorized Montgomery County in 2002, choosing victims at random, including a student wounded in front of a school. A recent sign about the importance of social networks in the recent Iranian post-election uprising. The view of the Canadian Embassy and U.S. Capitol from the roof terrace of the Newseum on a nearly 100-degree day.

When the Newseum closed, we walked to the National Gallery, where we went to Heaven On Earth, a display of medieval manuscript illuminations, plus The Art of Power, a wonderful exhibit on the Spanish Royal Armory that displays both the armor worn by Holy Roman Emperors Maximilian I and Charles V and Spanish Kings Philip II and King Philip III, plus paintings by Rubens and others of the rulers in their armor. We also saw the Beffi Triptych -- rescued from Abruzzo after the Italian earthquake last April and loaned to the National Gallery in gratitude for assistance preserving other artistic treasures -- and the small exhibit on the designers of the Lincoln Memorial and the statue carved by Daniel Chester French. In the evening we watched the Woodstock director's cut...boys were not impressed, declaring it "on weed" which in this particular instance was fair!
Posted by littlereview at 12:16 AM