Psalm: It Must Be the Medication
By April Bernard

So the hip rises, oh so slightly, in its golden socket,
and music continues despite the dawn

And memory sound as a wooden bucket, more sound

Why fuss with innuendo, when
gold and russet fruit lie across the forest floor?

Here, the loon's vocal cascade, absolute,
for the moment without remove, write, "I can't stop laughing"

I am delighted to have caught up with Beeej after far too long -- we went to Bombay Tandoor and chatted about online life and our various fandoms and stuff. Traffic was a nightmare getting to Tysons Corner -- I knew there was construction on Route 7, but for some reason the Beltway was at a standstill between River Road and the Dulles Toll Road -- but the food was fantastic and Beeej is always a delight. Plus she brought me tea and an infuser as a holiday present! And at least I wasn't in Baltimore, which had a massive water main break that closed roads all over the northeas; I think they're still asking city residents to minimize water use. On the way home I indulged myself some more, because my mother gave me some Brighton charms as a birthday present and some money with them, so I stopped at the mall and bought a couple of pretty spacers and one of their heavy necklaces. I love all their charms -- I can tell that even looking at the beads will be very dangerous! 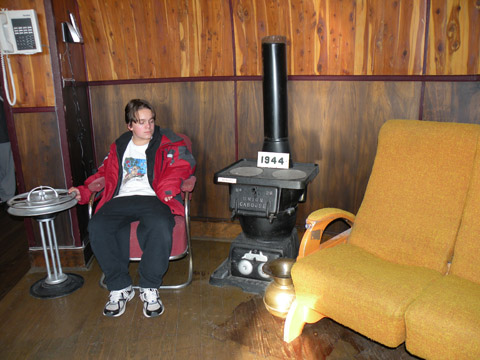 Adam checks out an old stove and spittoon at the Brunswick Railroad Museum last weekend. Most of the top floor is taken up with the huge model train display that starts at Union Station in historic DC... ...then heads out to the suburbs (Germantown in this era was all farms, not box stores and housing developments). There are some cute displays of a church wedding, a pig farm, and this fire-and-landslide disaster as the train goes by. The trains go over Seneca Creek and the Monocacy River... ...ending up at the old roundhouse, no longer standing, in Brunswick. The parking lot for the museum is down by the tracks, where trains pass through many times a day. On February 16, 1996, a MARC train from Brunswick en route to Union Station collided with an Amtrak train near Kensington, Maryland; 11 people died, including the MARC engineer and two conductors, and they are memorialized in Brunswick.

We watched Merlin's "The Sins of the Father" in the evening, and although the show has obviously taken as many liberties with Morgause's background as they have with Morgana's, Mordred's, et al, it's an utterly enjoyable episode with lots of wonderful Anthony Stewart Head moments as well as Bradley James' best acting job all series. I love the number of women who can seriously kick butt on this show, and although I'm a bit sad because Morgause's storyline would seem to suggest that Nimue won't be back any time soon, I love getting the backstory on why Uther is such a nutter and why Arthur will let his father get away with pretty much anything without calling him out. Plus there are lots of delightful funny moments --

Adam got a penguin game for Chanukah that we played in the evening, and I got Paul the Grateful Dead Monopoly so that will have to be for the weekend when we're supposed to get piles of snow. It would have been my grandfather's 99th birthday on Friday.
Posted by littlereview at 12:18 AM