I have behind the sky a sky for my return, but I
am still polishing the metal of this place, and living
an hour that foresees the unknown. I know time
will not be my ally twice, and I know I will exit
my banner as a bird that does not alight on trees in the garden.
I will exit all of my skin, and my language.
And some talk about love will descend in
Lorca poems that will live in my bedroom
and see what I have seen of the bedouin moon. I will exit
the almond trees as cotton on the brine of the sea. The stranger passed
carrying seven hundred years of horses. The stranger passed
right here, for the stranger to pass over there. I will soon exit
the wrinkles of my time as a stranger to Syria and the Andalus.
This earth is not my sky, yet this sky is my evening
and the keys are mine, the minarets are mine, the lanterns are mine, and I
am also mine. I am the Adam of two Edens, I lost them twice.
So expel me slowly,
and kill me quickly,
beneath my olive tree,
with Lorca . . .

"This poem is part of a long sequence, 'Eleven Planets at the End of the Andalusian Scene,' that Mahmoud Darwish wrote in 1992 to commemorate the 500th year of the expulsion of Arabs and Jews from Granada, Spain," writes Joudah in Poet's Choice, excerpted from If I Were Another. "Darwish lays out his vision of what happens after time proclaims a new end or a new beginning. This poem is remarkable if only for invoking the spirit of reciprocity and love with the poetry of the early 20th-century writer Federico García Lorca. There is a circular bond between these two great poets, who borrowed from the same well of language in the way love drinks from a 'bedouin moon.'"

Anyone who lives on the East Coast or who saw news from anywhere within 200 miles of me knows what I spent Saturday doing -- the same thing everyone else was doing, meaning admiring and enjoying the snowfall in between shoveling and digging out. We knew it was coming, though initial estimates were far below what we eventually got (yesterday they were saying 6-8 inches, then last night it was 10-12 inches, and by this morning it was 15-20 -- I think we got about 17). So we had toilet paper, milk, etc., and we had white bean chili for dinner to keep warm, and it was quite nice, relaxing day. 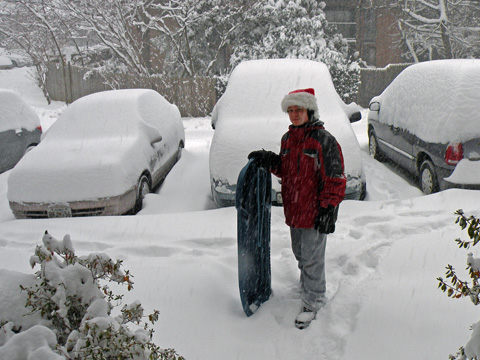 Adam left to go sledding behind their school with his friends. This is how the deck looked at about 9 in the morning... ...and here it is around 2 in the afternoon. We dug out the sidewalk three times. 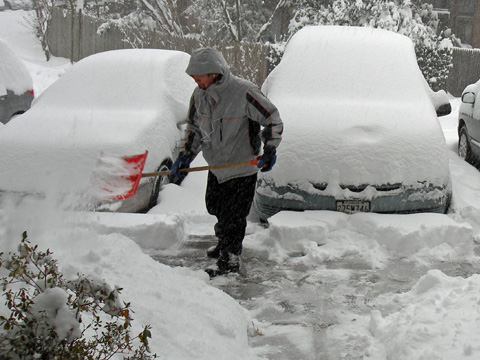 Here is Paul shoveling during one of the early rounds. And this is what my hair looked like after an afternoon shoveling session. The snow fell throughout the day. The cardinal spent a lot of the day on our bird feeder... ...and his mate spent some time singing in the bushes in the front of the house.

We spent the evening tuned in to BBC America, rewatching Doctor Who's "The Waters of Mars" -- I am positive that Comcast keeps track of how many people are tuned into which channel and I want to make sure they know we were watching, even though we've seen it before -- then we watched The Graham Norton Show with David Tennant and Inside the TARDIS, both of which were new to us and both of which we enjoyed a great deal, even though I've had it with RTD and his pontificating about what makes the Doctor meaningful (the Doctor was meaningful before him and will be after him; he's best-qualified to talk about what makes the Doctor commercial, since he sold the franchise to audiences on a grand scale in a way no one had managed to do before). I can't resist recaps involving Nine, Rose, and Donna, though.

New Orleans...nooooo! I hate the Cowboys!
Posted by littlereview at 12:08 AM