From the Lives of My Friends
By Michael Dickman

What are the birds called
in that neighborhood
The dogs

There were dogs flying
from branch to
branch

They were a smooth sheet
They grew

Not frightening at all
but beautiful, shiny, and
full of promise

What kind of light

They take a break in summer
to mow the piss
yellow lawns, blazing
front and
back

There is no break in winter

I am in love with the sisters of my friends
All that yellow hair!
Their arms
blazing

They lick their fingers
to wipe my face
clean

We will all be shipped away

painted on the outside

Left alone, for once

and then
we were shipped away

As soon as we retrieved Adam from volunteering at Hebrew school, we drove up to Howard County to meet Paul's parents at the fairground for the Maryland Sheep and Wool Festival. Apart from the incompetence of the local police as traffic cops -- they sent everyone arriving from Montgomery County past the parking lot, forcing them to U-turn more than a mile away and circle back through terrible traffic rather than simply letting people make left turns, delaying us more than half an hour and causing us to miss nearly all of Maggie Sansone's performance on hammered dulcimer -- it was a lovely afternoon. We had a picnic in the shade by the performance tent, then we walked around the barns to admire both the sheep and the products made with their wool (though it was very disconcerting to have lamb kabobs for sale right next to stalls with bleating lambs). Adam made a "techno sheep" video of some of the sheep. A ewe and her lamb at the Maryland Sheep and Wool Festival. 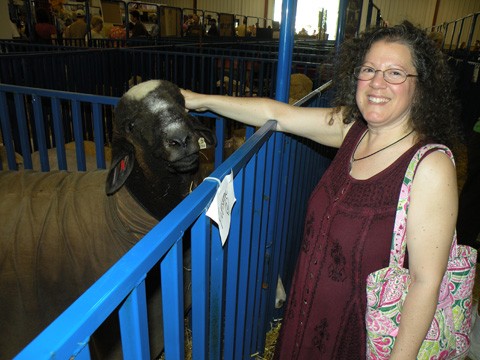 Here I am visiting with one of the many sheep at the festival... 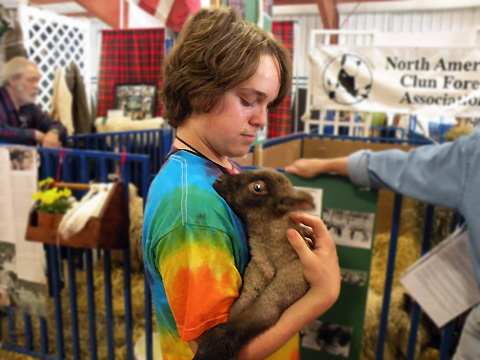 ...and here is Adam holding an eight-day-old lamb. In addition to sheep, the festival has knitted and woven goods made with yarn from alpacas... ...and angora goats and rabbits. There is also live music -- this is Maggie Sansone on the hammered dulcimer with other local musicians. And there are many vendors selling wool, yarn, and finished products. This is the tent of Dancing Leaf Farm, whom we visit regularly (a woman near us objected to the bare-legged plastic sock model on the right).

Since we arrived late, we stayed until after 5 p.m., looking at the judged craft show with my in-laws and visiting the tents of Dancing Leaf Farm and Tuatha, whose crafts we usually see on the Countryside Artisans Tour. We came home in time for a late dinner, since Daniel needed to study for AP exams, and we all watched "Victory of the Daleks," which I found very entertaining -- it's definitely the fluffiest Doctor Who episode in years, but I also haven't laughed that much during an episode in years, so if it's a change of pace rather than what Eleven's run is going to be like, it's all right with me.

Spoilers: The idea of comparing the Daleks to Hitler is pretty over-the-top -- I have news for the Doctor, if I had a Dalek I could have aimed at Third Reich HQ, I would not have hesitated any more than Churchill did -- and hahahaha I want one of the Dalek "Victory" posters! The progenitor device seems even more gimmicky than the past several ways of bringing back the Daleks after they were exterminated once and for all, and I missed the old Daleks as soon as the new crayon box Daleks exterminated them. But my bigger concern is that Amy and the Doctor just haven't interacted all that much in her first two episodes as his companion; they've been separated for a lot of the storylines. That's been great in terms of Amy's independence and character development, but I hope it doesn't mean she gets ditched in favor of River Song and Sarah Jane Smith (do NOT tell me anything if you're watching the UK episodes, I'm just speculating aloud!).

Now we're watching the Times Square bomb scare unfolding on MSNBC, which is scarier than Daleks. Hope everyone I know up there is all right and finding a place to sleep if necessary!
Posted by littlereview at 12:40 AM