Poem for Wednesday and Even More Sheep and Wool!

was a gift from Angus, came with his new Harley
which no ladies deigned to perch their buttocks on
and was therefore sold minus the shirt—
net cost: three thousand dollars, I wear the money
in my sleep. The black braid flowing from the man

herding dice at the Squaxins' Little Creek casino
cost two hundred thirty-five, well worth it
for the word "croupier." Work seven months on a poem,
then you tear it up, this does not pencil out,
especially for my mother, who ate potatoes

every day from 1935-41. Who went to the famous
Jackson Pollock show after the war—sure, she was a rube
from across the Harlem River, snickering
at the swindle of those dribbles until death squelched the supply
and drove the prices up. I've known men

who gave up houses worth half a million just to see
the back of someone whom they once bought diamonds.
And I've known women to swallow diamonds
just to amplify the spectacle of their being flushed.
The Gutenberg Bible, O.K., I get that:

five-point-four million dollars for a book of poems
written by God on the skin of a calf. A hundred years ago
the Squaxins could tell you easily
who the rich man was. He'd be dressed in a red robe
made of epaulettes from red-winged blackbird wings.

We finally have Adam's Bar Mitzvah album, only 11 months after the event! It looks great, though -- after considering less expensive options, we went with one that's similar to Daniel's book. I went with my mom to pick it up after taking Daniel to his statistics AP exam, which was administered in the church across the street from his high school. After we went over the album with the photographer and got her to glue the invitations to the blank pages, we went out for frozen yogurt with blueberries and a bit of shopping. Then I came home to wait for both kids to call -- Adam had been at the state orchestra festival and I wasn't sure they'd be back in time for his bus home, which they were, and Daniel was supposed to let me know when he was ready to be picked up from the exam, which turned out not to be till 5 p.m.

Paul discovered on the Internet that it was Star Wars Day -- "May the Fourth Be With You" -- and since we actually own a Star Wars cookbook, he made Boba Fettucini (with zucchini and low-fat, low-sodium sauce) and Wookie Cookies (with chocolate chips and cinnamon), plus Princess Leia Pillsbury Buns. You may stop laughing at any time. The producers of Glee apparently decided that this should be Bad '80s Week, which were my formative years and I own pretty much every song they did except "Run Joey Run" (yes, even "Ice Ice Baby," which along with "Can't Touch This" is on one of our many greatest hits of their year collections). I feel like all the characters jumped the shark several episodes back (except Sue, who was always larger than life and can therefore get away with anything) but when I'm singing along with "Total Eclipse of the Heart," I don't care. Sheep waiting for their moment in the spotlight at the Maryland Sheep and Wool Festival on Saturday... ...while another sheep is primped for her turn. This mommy and her babies didn't have to be paraded around to display their cuteness. 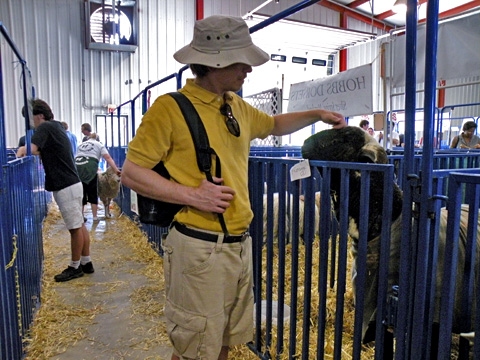 Neither did Paul. (He's the one in yellow, not the sheep.) I love being someplace with so many sheep all around! Of course, the Sheep and Wool Festival also has alpacas... ...and animals for sale, including this poor goat who maaaaaaed piteously the entire way through the parking lot.

Bueno Cinco De Mayo!
Posted by littlereview at 12:01 AM