It's so late I could cut my lights
and drive the next fifty miles
of empty interstate
by starlight,
flying along in a dream,
countryside alive with shapes and shadows,
but exit ramps lined
with eighteen wheelers
and truckers sleeping in their cabs
make me consider pulling into a rest stop
and closing my eyes. I've done it before,
parking next to a family sleeping in a Chevy,
mom and dad up front, three kids in the back,
the windows slightly misted by the sleepers' breath.
But instead of resting, I'd smoke a cigarette,
play the radio low, and keep watch over
the wayfarers in the car next to me,
a strange paternal concern
and compassion for their well being
rising up inside me.
This was before
I had children of my own,
and had felt the sharp edge of love
and anxiety whenever I tiptoed
into darkened rooms of sleep
to study the small, peaceful faces
of my beloved darlings. Now,
the fatherly feelings are so strong
the snoring truckers are lucky
I'm not standing on the running board,
tapping on the window,
asking, Is everything okay?
But it is. Everything's fine.
The trucks are all together, sleeping
on the gravel shoulders of exit ramps,
and the crowded rest stop I'm driving by
is a perfect oasis in the moonlight.
The way I see it, I've got a second wind
and on the radio an all-night country station.
Nothing for me to do on this road
but drive and give thanks:
I'll be home by dawn.

It's nearly midnight and I'm watching Jane Lynch on Saturday Night Live (which so far has been utterly mediocre even with Jane Lynch, but that's probably not Jane Lynch's fault), so I will present in photos my awesome day at the airpark and in the agricultural reserve of Montgomery County. (Adam, who is taking photography in school, was using my DSLR and took better photos, which you can see in his blog.) The sheep who provide the wool for Dancing Leaf Farm, which produces gorgeous homemade yarns and needlecrafts, graze beneath Sugarloaf Mountain. All the artists on the Countryside Artisans tour are in or near the Sugarloaf Mountain foothills. This is the porch of Sugarloaf Studio, where Susan Due Pearcy displays her paintings and prints. Our first stop of the day, however, was not a craft studio but the Montgomery County Airpark, which was celebrating its 50th anniversary with many planes on display and flight demonstrations, including two WWII bombers. Hours after we saw them on the ground at the airpark, we saw the Liberator fly above Sugarloaf Studio. In addition to art, the theme of the day was stinkbugs. We had a picnic at Little Bennett Regional Park, where we found ourselves surrounded by them and kept finding them in the car with us all afternoon thereafter. Little Bennett has a Mound Builder Trail that goes past these massive anthills built by ants that were very busy moving bits of leaves on this sunny, warm fall day. We visited Art of Fire, where we watched a demonstration of this goblet being blown from a blob of molten glass. Because the stem turned out uneven, it met an unhappy end, being melted down again. And we visited A Paca Fun Farm, an alpaca farm that is not actually part of the Countryside Artisans Tour, but which we've visited before to see their woolens and their large herd of award-winning alpacas including this four-day-old baby. 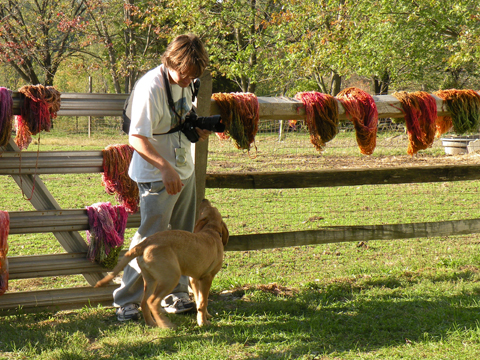 Younger son made friends with the puppy at Dancing Leaf Farm. Shortly after I took this photo, the puppy jumped on him and knocked him down.

We had leftovers for dinner because I wasn't sure whether we were meeting my parents and sister's family somewhere (in fact, I am not sure whether the latter even made it to town, since I never connected with anyone). Then we watched the new Merlin, which starts as yet another Lord of the Rings episode but then borrows from Mary Stewart instead, which is delightful (it's a long time since I've read The Crystal Cave because Marion Zimmer Bradley ruined me for later Arthurian novels, but maybe it's time for a retread).

Spoilers: I absolutely loved "The Crystal Cave" on Merlin even though I'm deeply ambivalent about its big revelation because I still want Morgana and Uther to have totally wrong dirty sex in which she ties him up and makes her do her bidding -- don't lecture me, Excalibur was one of my formative texts and Helen Mirren's Morgana has totally wrong dirty sex with her brother in that. And Uther/Morgana would be a million times hotter on Merlin than Arthur/Morgana ever could.

Plus Uther is crazy in love with Morgana, even if he's pretending it's paternal, and she's obsessed with him, whereas she barely thinks about Arthur. Uther never cried like that when Arthur's life was threatened, and I'm not sure he'd know for sure whether he was her father or not, so canon can play this a lot of ways. It is a total waste not to let Anthony Head have totally wrong dirty sex with someone, and Katie McGrath has really come into her own since they've been letting her be a villain!
Posted by littlereview at 12:38 AM