Poem for Wednesday and National Zoo

You heap the logs and try to fill
The little room with words and cheer,
But silent feet are on the hill,
Across the window veiled eyes peer.
The hosts of lovers, young in death,
Go seeking down the world to-night,
Remembering faces, warmth and breath—
And they shall seek till it is light.
Then let the white-flaked logs burn low,
Lest those who drift before the storm
See gladness on our hearth and know
There is no flame can make them warm.

I had a somewhat frustrating Tuesday. Yesterday I discovered that there was a small rip in one of our ratty, desperately-in-need-of-replacement sofa slipcovers that have survived two boys and three cats, so I figured I'd go look at slipcovers at various local stores...only to discover that none of them carries slipcovers in the shop any more. My first stop, Kohl's, claims only ever to have sold them online, though I was sure I'd looked at them there before. Bed Bath & Beyond only had a few flimsy solid-color covers that would be stained/ripped in a matter of hours. Target only sells slipcovers online, meaning I wouldn't even know how flimsy they were until they were delivered. Instead of taking a walk in the woods while Adam was at tennis, I went to the mall and checked Sears and Macy's...who only sell slipcovers online. I'd have had to go to Gaithersburg for JCPenney or Kmart, and I'm not doing that till I find out if they actually have them. Pottery Barn makes nice ones but they cost nearly as much as a new couch.

My other big project for the day was one I had not planned and can't discuss here or it would ruin a surprise for someone, but it involved organizing a great many files with new labels and was quite enjoyable...akin to reading old love letters from someone with whom you still adore. After dinner, we all watched the first two episodes of the fourth season of The Sarah Jane Adventures, which I loved...part one more than part two, since as often happens, the climax got a bit pedantic for kids, but it's all good, and I was more nostalgic for this cast than I am for the Eleventh Doctor and his crowd. Spoilers: I'm bummed that Luke is leaving as a regular, and I totally related to Sarah Jane sending her son off to college, though at least his application process seemed relatively painless! I was snickering at the dialogue when Sarah Jane offered to get Luke some cool new clothes, then asked whether cool was the right word -- "Is 'cool' cool?" -- at which point Adam said, "Fool." And I also snickered at K-9 to Mr. Smith: "You were adequate company." "You could always contact me if you need to." "I knew you would miss me." Mechanical dog/computer bromance!

Here are some more photos from my family's visit to the National Zoo over the weekend...flamingos, a tiger, a gecko, a cuttlefish and nautilus, a cassowary, a fishing cat, a lobster, and a spoonbill: 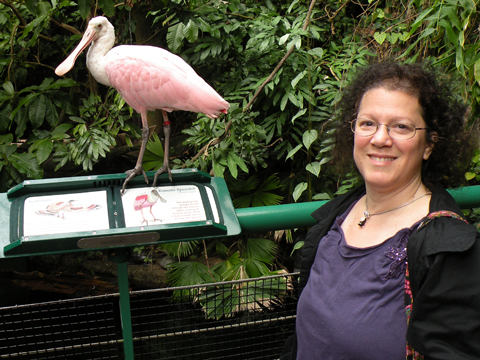