Poem for Monday and Family at National Aquarium

The Bluefish
By Isaac McLellan

It is a brave, a royal sport,
Trolling for bluefish o'er the seas;
Fair skies and soaring gulls above,
A steady blowing breeze;
A shapely yacht whose foaming prow
The billowy plain divides,
That like a gallant courser speeds
Far, free o'er ocean tides.

First from West India seas they came,
Haunting the Cuban coast,
Cruel as Spanish buccaneers,
A fierce, rapacious host.
But now by Northern seaboard shores
Their murderous way they take,
From Mexic Gulf to Labrador,
Wherever billows break.
The weaker tenants of the main
Flee from their rage in vain,
The vast menhaden multitudes
They massacre o'er the flood;
With lashing tail, with snapping teeth
They stain the tides with blood.

Rakish are they, like pirate craft,
All matchless to assail,
With graceful, shapely, rounded sides
And the sharp, forked tail;
And when the angler's hook is fixed
They fight, they struggling bleed,
Now leaping high, now plunging deep,
Darting with lightning speed.

And yet these sea marauders,
These tyrants of the main,
By fiercer, mightier ruffians
Are hunted, conquered, slain;
The tumbling porpoise hunts them,
Dorado fierce pursues,
And when the shark assaileth,
Blood-stains the waves suffuse.

We spent a delightful Sunday in Baltimore with Paul's parents, youngest brother Jon, and Jon's wife and twin eight-year-old boys, primarily at the National Aquarium, which none of Jon's family (who live in Oregon) had ever seen. We went through very slowly, starting with the Australia exhibit, then the dolphin show, for which Hufflepants joined us since she lives in the neighborhood and has met Paul's parents before several times. Then we went through the jellyfish exhibit and the four floors of exhibits above the central shark and ray tank (which is also home to a sea turtle, and which had divers feeding the animals while we were there). The newly renovated puffin and Atlantic seabird habitat was a highlight, though one of my nephews was pretty fried at that point and had a quarrel with his brother that escalated into a tantrum. We didn't get to the rainforest until the sun had already gone down, which made it hard to see the birds and sloth, since most of the light there comes in through the glass ceiling.

The overtired nephew had recovered by the time we got to the coral reef and the sharks, so we took our time going down those levels before we headed out for dinner. We ate at Uno's Pizza (which would have donated 20% of our meal cost to the aquarium's conservation programs had I known to bring a coupon, though I didn't know we were going to end up eating there) -- I had eggplant, spinach, sun-dried tomatoes, and feta on a thin wheat crust, but everyone seemed pleased with what they ordered. We already knew by dinnertime that the Redskins had beaten the Titans with a push in overtime and the Ravens had beaten the Panthers with many points to spare, thus confirming my belief that my teams will win as long as I don't see a minute of the game, and we got to see the Patriots beat the Colts on the restaurant TV, so my in-laws were happy. None of us wanted Michael Vick to play well or even tolerably against the Giants, but we weren't so lucky in that regard. And though we watched Boardwalk Empire, we forgot about the Futurama special until it was too late, so must wait for the Wednesday rerun! There are always seagulls all around Baltimore's Inner Harbor, hoping to catch a crumb like these. There used to be decorated crabs all over the harbor. Now there is just this one in honor of Harborplace's anniversary. 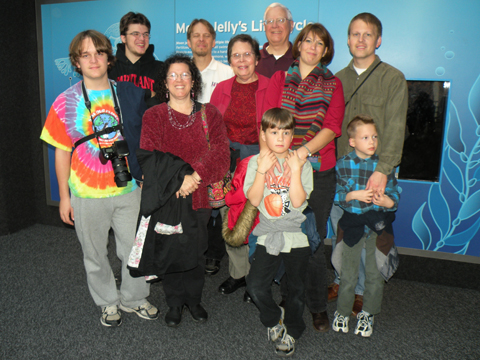 Hufflepants took this photo of my extended family near the entrance to the jellyfish exhibit. We saw the dolphin show, where dolphins and trainers together greet the crowds... ...and to visit the puffins and seabirds in their newly renovated home. We got to see rays and eels and guitarfish and puffers and awesomely patterned urchins and fish like these. 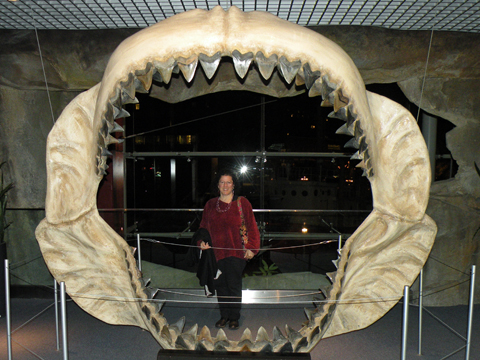 And I was nearly eaten by a huge dead shark mouth.
Posted by littlereview at 12:44 AM