I am in the Outer Banks with my family and Dementordelta at the end of a really fabulous Monday whose only drawback is that someone stole Adam's and my flip-flops off the steps to the beach after dark. We got up and drove to Richmond, where we went to the wonderful Faberge exhibit at the Virginia Museum of Fine Arts -- the museum has a terrific collection at all times but there was much more detail about Faberge and the development of both European arts and Russian politics during the era in which the eggs and other decorative items were made, including the spectacular Nobel Ice Egg which I had never seen before since it usually resides in Houston. Even the kids were chatty despite being in an art museum.

We had lunch there in the cafe, then we drove in separate cars to Kill Devil Hills, where we spent the late afternoon on the beach -- mostly in the gloriously warm Atlantic -- surrounded by fish, pelicans, seagulls, and sand crabs, though not a lot of people, which was glorious too. We had dinner in our hotel room (Paul had made veggie chili with corn for Lammas), watched Warehouse 13, then went back to the beach to look for ghost crabs, which were plentiful, and to the grassy area behind our hotel (which faces the Wright Brothers monument) to look for toads, of which we saw several. Beach and animal photos tomorrow because I am very sleepy; here are Delta and myself outside the Faberge exhibit! 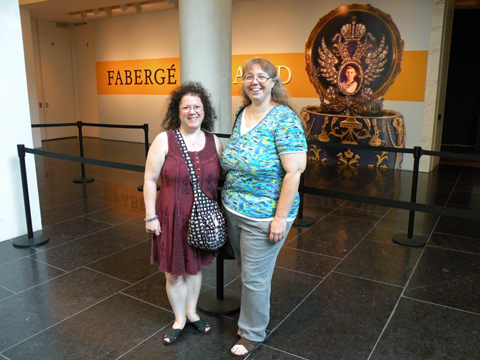