At the Equinox
By Arthur Sze

The tide ebbs and reveals orange and purple sea stars.
I have no theory of radiance,

but after rain evaporates
off pine needles, the needles glisten.

In the courtyard, we spot the rising shell of a moon,
and, at the equinox, bathe in its gleam.

Using all the tides of starlight,
we find
vicissitude is our charm.

On the mud flats off Homer,
I catch the tremor when waves start to slide back in;

and, from Roanoke, you carry
the leafing jade smoke of willows.

Looping out into the world, we thread
and return. The lapping waves

cover an expanse of mussels clustered on rocks;
and, giving shape to what is unspoken,

forsythia buds and blooms in our arms.

Friday was a gorgeous, clear, cool day. Adam had no school due to a county-wide teacher's convention and Paul had taken the day off thinking we were going to meet his parents in College Park for the University of Maryland's Family Weekend, though as it turns out, Daniel had fencing practice for an event this weekend and a concert he was going to see for a class, so we decided that we would have all four grandparents meet us tomorrow after Adam's track competition. Since Paul had the day off anyway, we went instead to Riley's Lock and Pennyfield Lock on the C&O Canal, where the leaves are a lovely mix of green, yellow and brown with some reds and golds mixed in, and where we saw a heron, a snake, and several turtles, though we did not see the ruins of Pennyfield's Inn as we did the last time we visited in 2009, since the house had fallen into such disrepair that it was demolished. We also went to Homestead Farm to visit the animals -- goats, sheep, chickens, turkeys, a calf, guinea fowl, ducks -- and pick out a Halloween pumpkin. Leaves are turning over the C&O Canal at Riley's Lock. The squirrels there are preparing for winter... ...though the turtles are still trying to enjoy what sunshine they can find in the swollen canal water. Though Pennyfield Inn is gone, the rock formations and colorful trees remain at Pennyfield Lock... ...where we found this snake heading onto the asphalt and turned it around toward the grass. The goats at Homestead Farm are happy to take imperfect apples from the people who picked them. 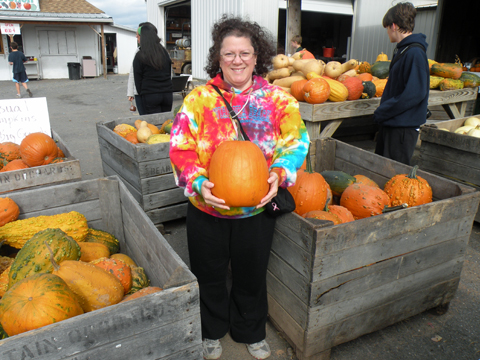 Here I am with our Halloween pumpkin, which will be a jack-o-lantern in several days. The farm also has plenty of fall flowers, gourds, squash, and pumpkins of all sizes.

Then we came home so Adam could go to dinner and Footloose with a group of friends while Paul and I had dinner with my parents (we had tried to make plans with the parents of one of Adam's friends, but they were crazy busy with their other children, and my mother made zucchini quiche which was awesome). In between I finished and posted my review of the even more awesome "Past Prologue", which not only gives us a proper introduction to the brilliance that is Kira Nerys and to her friendship with Odo, but throws in the start of the Garak/Bashir flirtation for good measure. Nothing on either of our evening shows, Nikita and Sanctuary, came close, though I do love all the female characters and doubt we'd have any of them on TV if Kira had not paved the way.

Fannish5: Five favorite ships - sailing ships, spaceships, etc., not relationships.
1. USS Enterprise, Star Trek (no bloody A, B, C, or D)
2. HMS Surprise, Master & Commander: The Far Side of the World
3. TARDIS, Doctor Who
4. The Interceptor, Pirates of the Caribbean
5. The Renown, Horatio Hornblower
Posted by littlereview at 12:01 AM