The men would sometimes try to catch one,
throwing a looped wire at the great white cross
that tracked their every turn, gliding over their deep
gulfs and bitter waves: the bright pacific albatross.

Now, with a cardboard sign around his neck, the king
of the winds stands there, hobbled: head shorn,
ashamed; his broken limbs hang down by his side,
those huge white wings like dragging oars.

Once beautiful and brave, now tarred, unfeathered,
this lost traveller is a bad joke; a lord cut down to size.
One pokes a muzzle in his mouth; another limps past,
mimicking the skliff, sclaff of a bird that cannot fly.

The poet is like this prince of the clouds
who rides the storm of war and scorns the archer;
exiled on the ground, in all this derision,
his giant wings prevent his marching.

Dementordelta is here because we are going to Longwood Gardens on Sunday -- sans enfants, since Adam is going to work at Hebrew school and Daniel is going to hang out with my parents until they take him back to College Park -- so once again I will keep this short. I had a lovely afternoon with my family and Paul's parents at South Mountain parks; we couldn't go to Gambrill this year because of road closures and Catoctin still has trees down across the major pass up the mountain, so we started at Washington Monument State Park, where the leaves are a bit past peak but there's still plenty of color, then we went to Gathland, which is always beautiful in fall.

We stopped at South Mountain Creamery both to pick up cheese and eggnog and to visit the animals -- there are many calves now and the fall festival chicks are nearly chickens. From there we drove to the nearby Reno Monument and hiked through the woods to the North Carolina Monument, which is very dramatic under the trees. Then we came home, where we had bangers & mash and parkin for Guy Fawkes Night. Now Delta and I are watching Edward and Mrs. Simpson and Daniel and Adam are watching various things on their computers that Old People apparently cannot understand. Here are some photos from earlier in the day: 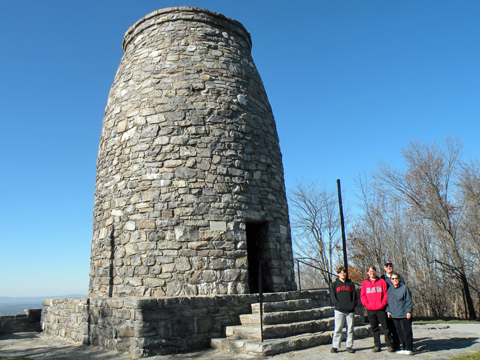 Many ladybugs were climbing on the monument -- the only Washington Monument in the DC area that can currently be climbed. Looking toward Boonsboro, it is obvious that the leaves are thinning. ...and around the ruins of the barn. Baby cows were smooching (or more likely licking milk off each other) at South Mountain Creamery. And there were three litters of piglets in the barn. The North Carolina Monument is in the woods about a quarter mile from the Reno Monument at Fox's Gap.
Posted by littlereview at 12:30 AM