We got up early and drove to Baltimore to go see Toby's Dinner Theatre's production of Beauty and the Beast, in which my cousin-by-marriage Emily is a member of the ensemble -- she was among other things a wolf, a plate and a girl in town. The food was okay -- lots of packaged pastries, waffles, sausages and desserts, plus a carving station, eggs and poached salmon which was the main thing I ate -- and the show was very good, with some excellent choreography and great singing. The woman who plays Belle is married to the guy who plays Gaston, which made it kind of amusing to listen to her swearing that she would never marry him. Cogsworth was our waiter and he was quite friendly and funny.

I liked the musical better than the Disney movie, though it still can't hold a candle to Cocteau's film. Belle's relationship with her father is fleshed out better and some of the details that were in the direct-to-video sequels in which Belle taught the Beast to read were in the show. And Gaston was made a much more physical bully, while the Beast's physical brutishness was toned down, which made it slightly less a comparison of abusive men for Belle to choose between. Can't say I adored the additional sappy love song even if Tim Rice did write the lyrics! The kids liked it a lot and I was very glad we'd just watched the movie because they both have perfect memories for songs -- hear them once and remember the words, so they knew everything that had been changed. 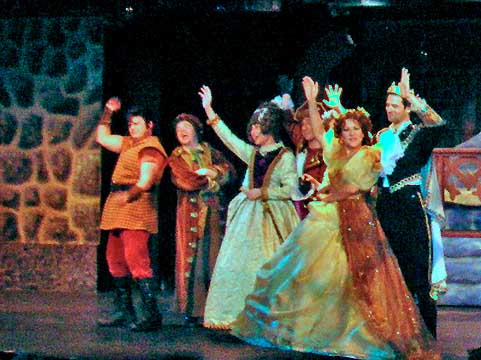 When we got home a little after four, we decided the kids really needed some exercise after spending so many hours sitting at the show and in the car, so we went hiking at Locust Grove Nature Center which was covered in spring flowers. The ground was very damp from all the rain the past couple of days and the peepers in the standing water were very loud...we snuck into the marsh enough to get muddy to see if we could see the frogs, but although we could hear them all around us, they were hiding in the tall grasses in the middle of the water! We did, however, see a big box turtle in the woods that my younger son spotted. And we spent some time skipping stones into the creek, only to be joined by a big black dog that apparently lives in one of the houses at the far end of the nature center, since we could hear his owner yelling at him to come back. He chased our stones, shook water on us and followed us all the way to the parking lot where we were yelled at by naturalists for failing to leash "our" dog.

At night we watched Mulan with the kids all the way through because we were all in the mood for it after the teaser the other day...I wish there was a way to stage that one, but I don't see how the battle with the Huns could work onstage! I just find that story so much more appealing...she makes the men rethink their priorities and she gets the guy without having to compromise herself or suck up to him in any way. Plus, you know, she saves China and the Emperor! I kept meaning to look up the historic Fa Mulan in more detail after I first saw that and never did, other than what little George Takei said about her (he played the eldest ancestor). I need to remember to do that. And, of course, we watched The West Wing.
Posted by littlereview at 12:03 AM