We had rain nearly all day, which meant that soccer was cancelled for younger son, and since it is spring break, older son did not have to work in my mother's Hebrew school class. So we did lots of movie-watching. In the morning I partook in my annual ritual for the week before Easter: watching Jesus Christ Superstar.

I got all the laundry sorted and folded while watching that, and then after lunch it was still raining, so we took the kids to see Ice Age: The Meltdown, which I actually think I liked better than the first, though I have not watched the original in several years so I may be misremembering. I have nothing profound to say about it -- it reminded me of the Land Before Time movie where the climate changed and the dinosaurs had to leave the Great Valley, only the characters in Ice Age have much less annoying voices and sing much funnier songs, plus there is a Sabertooth Squirrel and Queen Latifah as a mammoth who thinks she's a possum, and what more does a movie need? We all enjoyed it, especially the "Food, Glorious Food" parody performed by the buzzards (though the kids did not know the song from Oliver).

It was still raining when we left, but by dinnertime the clouds had broken a little and just after sunset, this was the view through the damp flowers toward the cul-de-sac. 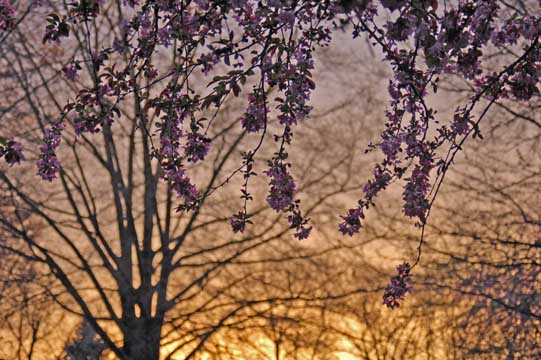 One of my cousins (young actress, NYU Tisch graduate) is in a local pro dinner theater production of Beauty and the Beast so we are spending most of Palm Sunday there...brunch buffet opens at 10, the show's at noon, the theater's outside Baltimore so it'll be a long drive there and back. We realized talking to the kids about Ice Age that neither of them remembered the Disney movie, so that was our evening entertainment. Both boys resisted it on the grounds that it was a baby movie (that it was a girl movie was not quite said aloud but definitely in the subtext), and then they sat and watched and were totally entertained.

I was the one rolling my eyes about everything I really despise about the Disney version of that story...given a choice between the Beast and Gaston, I'd have entered a convent! Yes, ladies, you too can turn a beast into marriageable material so long as he has a library and you take responsibility for his temper. It left a bad enough taste in my mouth that I had to put on the "Be A Man" scene from Mulan afterward -- my favorite Disney moment in my favorite Disney film. I've been told the stage musical of B&TB is better than the film so I shall look forward to that...I do like the music, but I need to go reread my U of Chicago prof Richard Strier's lecture notes on how Shakespeare portrays disobedient servants in a far more favorable light than Disney, where everyone is supposed to be a happy helpful teapot.
Posted by littlereview at 12:09 AM