At Pegasus
By Terrance Hayes

They are like those crazy women
who tore Orpheus
when he refused to sing,

these men grinding
in the strobe & black lights
of Pegasus. All shadow & sound.

"I'm just here for the music,"
I tell the man who asks me
to the floor. But I have held

a boy on my back before.
Curtis & I used to leap
barefoot into the creek; dance

we used to pull off our shirts,
& slap music into our skin.
He wouldn't know me now

at the edge of these lovers' gyre,
glitter & steam, fire,
bodies blurred sexless

by the music's spinning light.
A young man slips his thumb
into the mouth of an old one,

& I am not that far away.
The whole scene raw & delicate
as Curtis's foot gashed

on a sunken bottle shard.
They press hip to hip,
each breathless as a boy

carrying a friend on his back.
The foot swelling green
as the sewage in that creek.

We never went back.
But I remember his weight
better than I remember

my first kiss.
These men know something
I used to know.

How could I not find them
beautiful, the way they dive & spill
into each other,

the way the dance floor
takes them,
wet & holy in its mouth.

Another from Poet's Choice in Sunday's Washington Post Book World. "Hayes didn't grow up in any mythic 'post-racial' America, but his high school was integrated, and his South lacked the colored water fountains I was yanked away from as a girl," writes Mary Karr. "Hayes's poems enact the new race struggle, more up-to-date than the pre-civil rights poems of his lit'rary ancestors (Langston Hughes, say), but equally instructive to this white reader."

We've left Salem, where Brooke and Jon made us a huge breakfast with sausages, eggs, cinnamon crumb cake and fried potatoes, then took us to Minto-Brown Island Park, a nearly 1000-acre park along the Willamette River with lots of birds and wildflowers. After a walk, we stopped at a local mall to exchange for a larger size an Oregon t-shirt they had gotten Adam for his birthday. Then we walked across the street to a nearby Thai restaurant for a late lunch. The food seemed very good, but I was so blinded by a migraine that I barely ate anything. I'm afraid I was a pretty dull guest, having had trouble keeping my eyes open for the past two days. 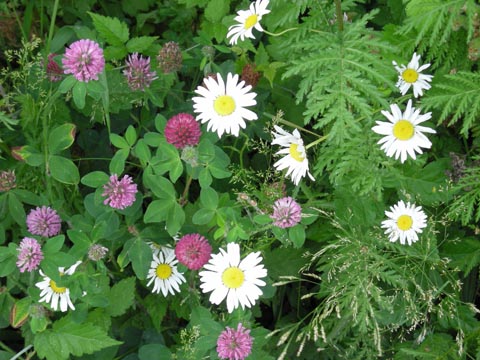 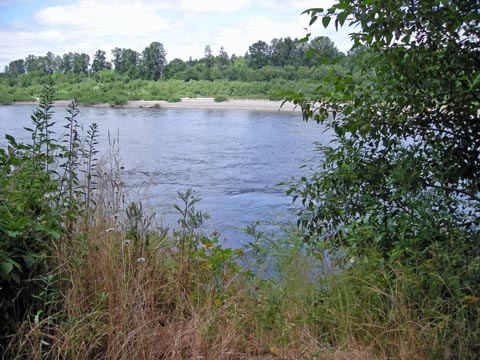 Riverside itself is very pretty, with currents in the water and tall grass growing on the banks. 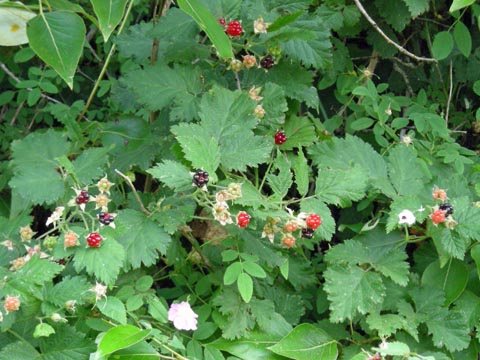 Wild blackberries aren't yet ripe, but they are plentiful near the river as well. 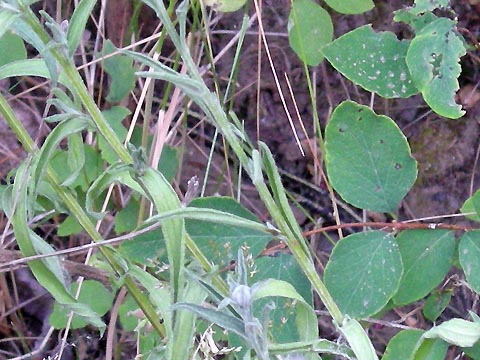 The dark diagonal stripe beneath the leaves is a garter snake fleeing from my camera. I had stepped over to see the blackberries when it startled me by making an appearance. 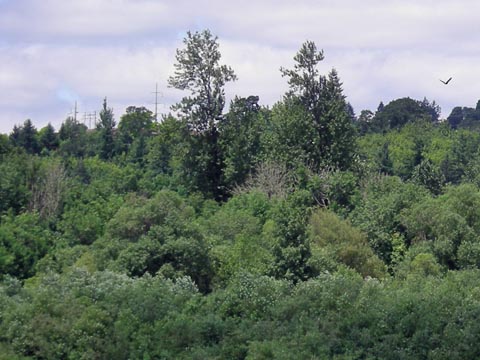 A hawk (or maybe an eagle or osprey) flying over the trees across the Willamette River. 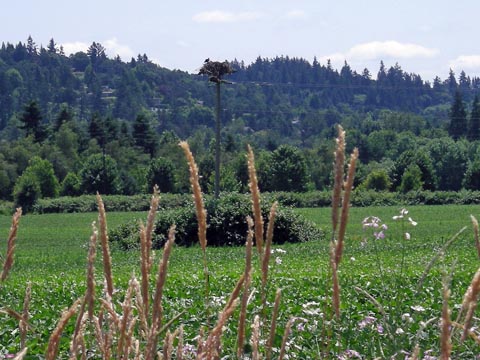 Another large bird had made a nest at the top of this telephone pole in the middle of the working farm at the park. 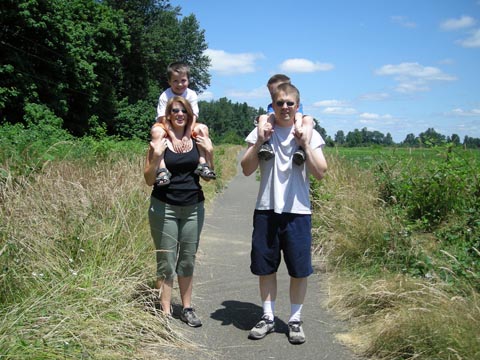 Brooke and Jon were recruited to serve as transport when the twins got tired of walking. 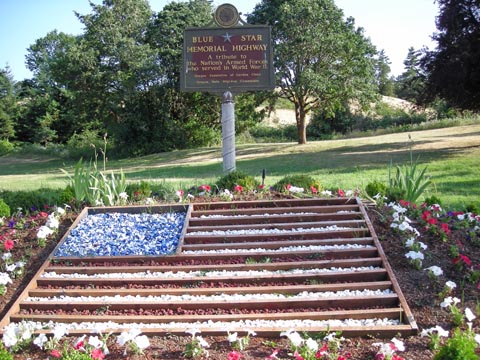 A memorial in stone on the I-5 between Eugene and Ashland.

Now we're in Ashland, sadly without time to see anything at the excellent Oregon Shakespeare Festival so we can get to Yosemite by Monday evening. The weather is gorgeous and my head is somewhat better. We had a lovely drive past Mount McLoughlin with wild deer and domesticated sheep at roadside in various places, and since no one was very hungry after lunch out, we had sandwiches in our room while watching The Simpsons movie.
Posted by littlereview at 3:10 AM