The Piano Player Explains Himself
By Allen Grossman

When the corpse revived at the funeral,
The outraged mourners killed it; and the soul
Of the revenant passed into the body
Of the poet because it had more to say.
He sat down at the piano no one could play
Called Messiah, or The Regulator of the World,
Which had stood for fifty years, to my knowledge,
Beneath a painting of a red-haired woman
In a loose gown with one bared breast, and played
A posthumous work of the composer S—
About the impotence of God (I believe)
Who has no power not to create everything.
It was the Autumn of the year and wet,
When the music started. The musician was
Skilful but the Messiah was out of tune
And bent the time and the tone. For a long hour
The poet played The Regulator of the World
As the spirit prompted, and entered upon
The pathways of His power—while the mourners
Stood with slow blood on their hands
Astonished by the weird processional
And the undertaker figured his bill.
—We have in mind an unplayed instrument
Which stands apart in a memorial air
Where the room darkens toward its inmost wall
And a lady hangs in her autumnal hair
At evening of the November rains; and winds
Sublime out of the North, and North by West,
Are sowing from the death-sack of the seed
The burden of her cloudy hip. Behold,
I send the demon I know to relieve your need,
An imperfect player at the perfect instrument
Who takes in hand The Regulator of the World
To keep the splendor from destroying us.
Lady! The last virtuoso of the composer S—
Darkens your parlor with the music of the Law.
When I was green and blossomed in the Spring
I was mute wood. Now I am dead I sing.

"Allen Grossman's poetry is tethered to an antiquity that he both honors and subverts," writes Mary Karr in Poet's Choice in Sunday's Washington Post Book World. "Grossman's grand and bardic style echoes the High Modernist capital-T Tradition that bred both Yeats and Eliot (about whom Grossman has written). He leavens his work with the hilarity of honky tonk and the Borscht Belt. "The Piano Player Explains Himself" is an ars poetica, in which the piano is an actual Messiah -- as poetry is, I think, when it's played right. Grossman's lyric strategies sometimes involve repeating themes with the biblical-sounding circularity of Eliot's 'Four Quartets' (themselves inspired by Beethoven's late quartets): 'We shall not cease from exploration/And the end of all our exploring/Will be to arrive where we started/And know the place for the first time.'"

We are home! Somewhat blearily, as we had to drive more than 500 miles on this last leg, which required getting up very early this morning in case we hit traffic, which for the most part we did not -- we were incredibly lucky this trip both in terms of the driving conditions and in terms of the weather -- we're now seeing news about both the fires near Yosemite and the flooding in Missouri where we were earlier in the month. We had thought about stopping in Columbus for lunch, but we got such an early start and made such good time that we were long past it by the time we found a Quizno's further on in Ohio. We took I-70 to I-79 to I-68, which took us through a bit of Pennsylvania and a longer stretch of West Virginia. Once we got into Maryland, we made two stops: Noah's Ark in Frostburg, which is very obviously the inspiration for the ark in Evan Almighty, and Sideling Hill, a vertical cut to make way for a road that reveals the geological history of the Appalachian Mountains. 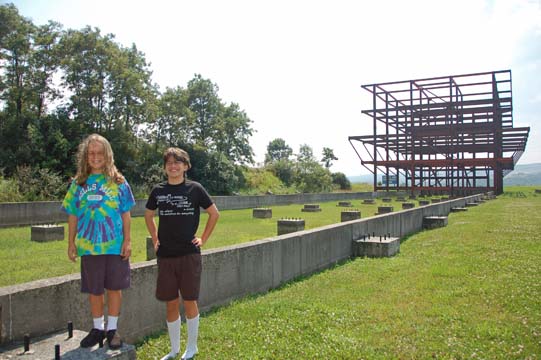 Like everywhere else in the US, there are two competing schools of thought on how the state of Maryland's geology and biology came into existence. 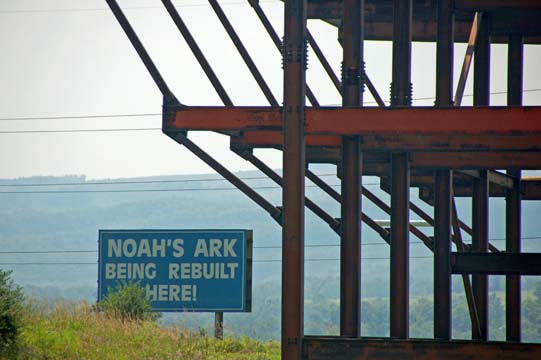 The pastor who started work on this project dreamed for three straight months about an ark on a hillside and God telling him that people from all over the world would come to see it. 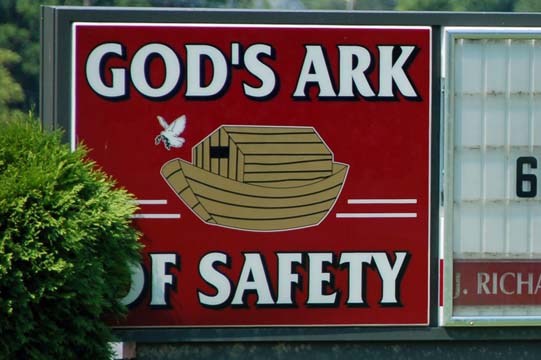 The illustration on the ark web site is a dead ringer for the ark from Evan Almighty that Steve Carell built in Virginia. 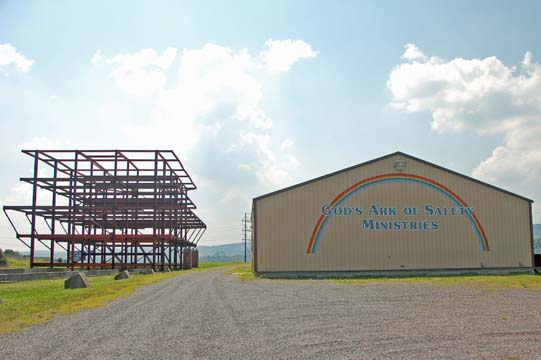 The pastor says the ark symbolizes the imminent return of Jesus. It has been under construction since 1974. 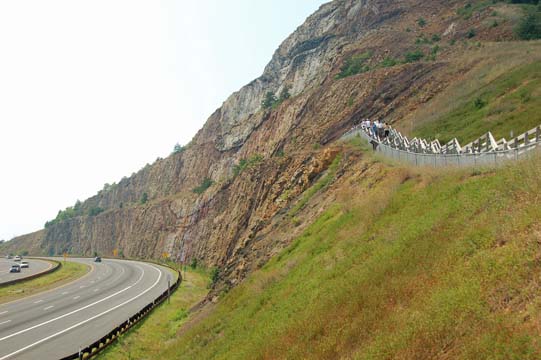 This is Sideling Hill, blasted apart to make way for Interstate 68 and cutting many miles off a journey through this part of Maryland. 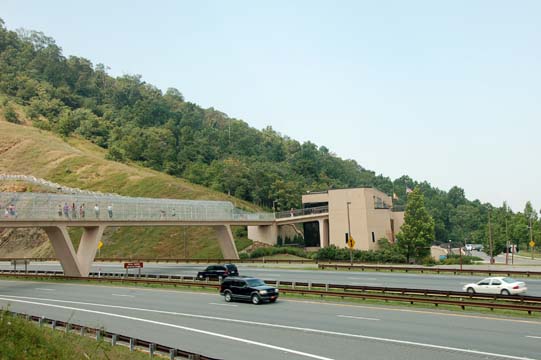 A walkway over the interstate leads to a museum about the compressed sedimentary rock strata and the fossils found on the site... 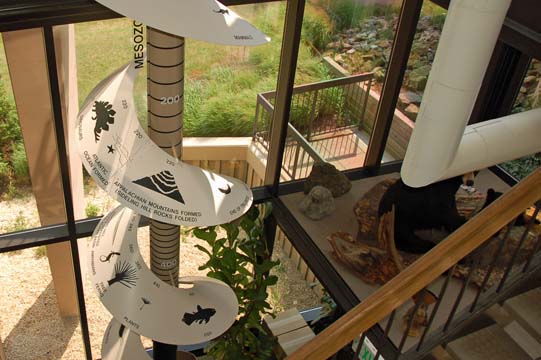 ...tracing evolution in the region from a swamp to a sea to a mountain range. 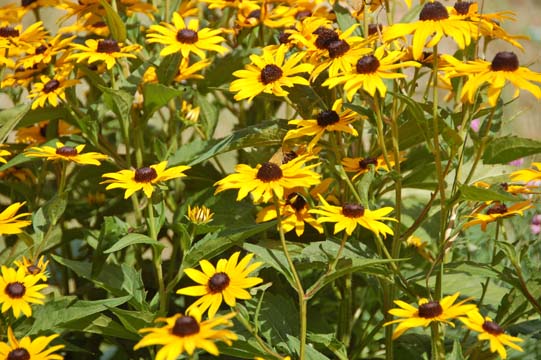 And the rest stop is surrounded by Black-Eyed Susans, the Maryland state flower.

We got home around 5 p.m., took half an hour to unload the van and I immediately started the first of what will probably end up being eight laundries. PerkyPaduan took excellent care of our house and pets! The cats appear to have taken our absence in stride, as they tried to get us to feed them, then promptly decided that our plastic bags were more exciting than we were, We took a break to go out for deli with my parents, then came back to sort and hang clean clothes, go through piles of souvenirs bought for ourselves and others, shift files from the laptops to the desktops, and start going through a month's worth of mail. Rosie is helpfully lying on top of the pile of bills, while Cinnamon is upstairs trying to get someone to turn on a sink so she can drink from it and Daisy is getting into every plastic bag, pillowcase or clothes pile she can find. Life as usual!
Posted by littlereview at 3:02 AM